What are Sixers chances of advancing, winning NBA title after Game 1 loss to Hawks? 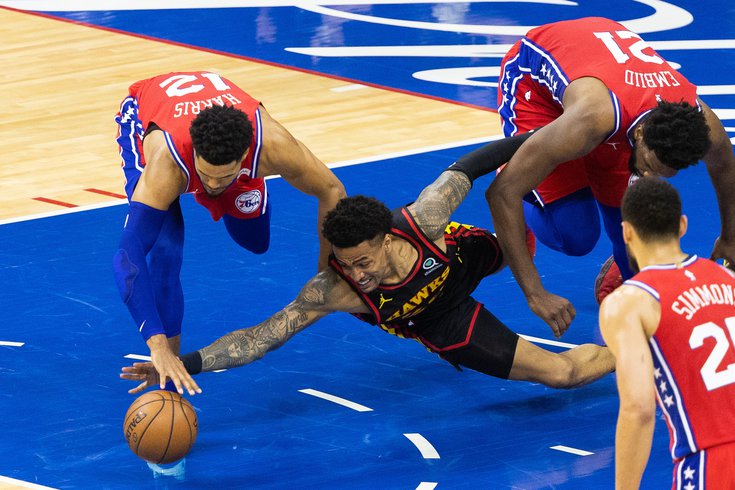 What are the Sixers NBA title chances after their Game 1 loss?

Game 1 of the Eastern Conference Semifinals between the Sixers and Hawks was filled with surprises.

Like that Joel Embiid not only played — with his injured knee looking entirely healthy — but also scored 39 points.

Or that Philly, with it's MVP candidate, was behind more than 20 points in the first half and looked pretty terrible on defense.

Or that the Hawks made a franchise playoff record 20 three-pointers and the Sixers turned the ball over 22 times.

Or that the Sixers somehow clawed their way back to within one possession with seconds remaining, before eventually faltering.

Typically in the NBA, Game 1's are a pretty huge deal. Losing at full strength on your home court is not a good thing, to be sure, but historically Game 1 road winners lose the next game. In 2001, the Sixers (who made the NBA Finals) dropped Game 1 of this round and were fine. They also were on the flip side of it in the Finals, when they beat the Lakers on the road in Game 1 before losing the next four in a row.

For what it's worth, the Sixers are five-point favorites in Game 2, according to odds compiled at Pickswise.

However, the Sixers, with questions surrounding how much Embiid can handle a full workload and the talented teams that lie ahead after Philly handles the Hawks — which is far from a foregone conclusion as they trail 1-0 in the series — the Sixers' odds of making the Finals, let alone winning a title have taken quite a hit.

Beginning the series as -190 favorites, the Sixers — following Sunday's 128-124 loss — are losing the confidence of the analytics nerds. Over at FiveThirtyEight.com the Hawks are listed as having a 59% chance of winning in Round 2, though Philly holds a 20% to 19% advantage over them in chances of a berth to the Finals. Philly's 9% piece of the NBA championship odds pie puts them in fifth behind the Nets, Jazz, Clippers and Suns.

The Ringer also is using advanced metrics to try and predict the winners in the NBA Playoffs, and Philadelphia's Game 1 setback leaves the Sixers, they surmise, with a 51% chance of advancing past Atlanta (with 10% championship chances). Their most likely outcome believe it or not, is the Sixers in 7 games (22%), followed by the Sixers in 6 (18%) and the Hawks in 6 (16%).

The Sixers started their playoff journey with +800 NBA championship odds. Those climbed slightly to +700 before this round started, but they have sine fallen, according to MGM via Pickswise, to +1400. They were behind four teams and are now behind five, with the Suns sliding in ahead of them. And no, the Hawks are still massive underdogs at +2000, the worst of any remaining team.

What does all of this mean? Well, the Sixers are still in decent shape as far as handling the Hawks, but the long term effects of Embiid's injury paired with the playoff dominance of the other teams vying for an NBA crown has oddsmakers doubting their ability to go all the way.