What went wrong in Sixers' disastrous first half vs. Hawks in Game 1? 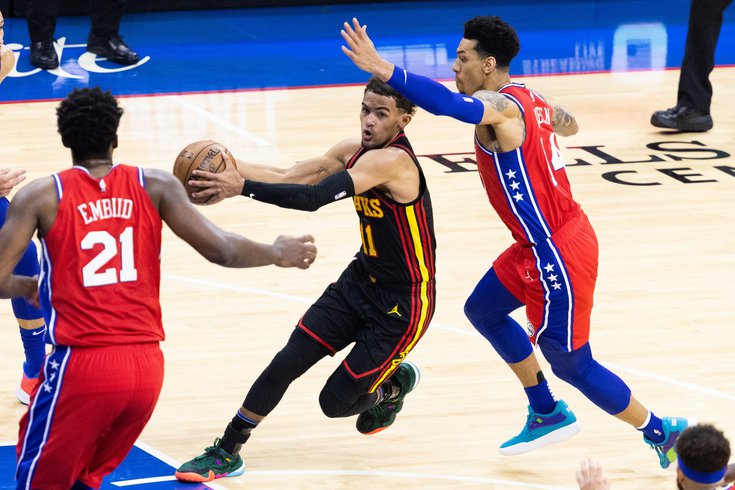 The Sixers' defense let then down in their Game 1 loss.

Between Joel Embiid's inclusion in the lineup, a wrestling-themed intro, and the rarity of a Game 1 in Philadelphia past the first round, the seeds were planted for a dominant Sixers performance to open the second round. But 42 first-quarter points from the visiting Atlanta Hawks later, the script had been flipped, and the Sixers found themselves chasing the game the rest of the way.

It only ended up being a four-point defeat in the end, with the Sixers roaring back thanks to pressure defense and improved shotmaking in the final period. But they'd tell you themselves they never should have been in that position to begin with, scratching and clawing just to have a chance to win on their home floor.

So we start with a simple premise: what went wrong, and how worrisome is it looking forward?

Trae Young's skill set was not exactly a secret coming into this series. He is Atlanta's best player, their offensive engine, and the author of their Round 1 victory over the New York Knicks. We covered how he can hurt you in our series preview, and the Sixers had every opportunity to learn from the body of work Young had up to this point.

Instead, the Sixers seemed committed to making as many poor decisions as possible. Using Danny Green as the primary defender on Young was the first point of contention for most fans, but Rivers' mind went somewhere else first — execution of the scheme.

"Overall it was our coverages as much as it was Danny," Rivers said after the game. "The rejects [of screens] are on Danny, the coverages on the double drag — and that's basically what they hurt us with, one double drag — that was more on us."

Atlanta's use of drag screens for Young was a point we specifically brought up in the lead-up to this series. Defending a pick-and-roll guard in space who can shoot and pass like Young is admittedly a huge ask for any defense, even one as good as Philadelphia's. But they hardly gave themselves a chance at times, with the bigs dropping and dropping until eventually, Young was right where he wanted to be on the floor.

Trying to force Young to shoot midrange shots is not a bad goal, in the sense that a midrange heavy offense is what you'd always want the opponent to have. The Sixers, though, were allowing Young to get all the way to the paint, chasing over the top to keep him away from the three-point line and sinking toward Clint Capela to prevent the lob over the top. Young's floater and runner game is terrific, and the Sixers let him get to those shots frequently in the first half.

This illustrates the challenge of guarding Young, but also the value Capela provides even if he never touches the ball. Embiid is concerned enough about the lob threat that he never even makes an attempt to contest the opponent's top offensive weapon.

There's at least one defensible reason to sit in drop and allow Young to work: Embiid's health. If the Sixers had said they didn't want Embiid moving around too much as he tested out his knee, it would have been an understandable quirk. But Rivers noted after the game that he only had a concern about Embiid when the game turned frantic in the closing minutes.

"We didn't change much, not because of his health," Rivers said. "We changed more because of Trae Young than Joel's health, I'll say that."

Rather than coming out with a game plan befitting a No. 1 seed with homecourt advantage, the Sixers ceded the floor to Young and allowed him to settle in. This is a big, bruising defensive team, capable of winning by playing the aggressor. In fact, some of their best defensive moments (in the first half or otherwise) came when Embiid was empowered to show hard as Young turned the corner:

Leaving Green on Young for as long as they did, mind you, didn't help matters either. Green's performance was so poor in Game 1 that it will inspire questions about his role moving forward, with Matisse Thybulle playing far better against Young in the reps he got on Sunday afternoon. Green couldn't so much as force Young to pick up the ball when the Hawks slow rolled it down the court in the final five minutes, inspiring audible groans and plenty of boos at the arena.

Most fans would have simply liked to see Ben Simmons defend Young. Players and coaches have spent most of this year crowing about his Defensive Player of the Year credentials, only for Simmons to get relegated to secondary duties when the games matter. Rivers' concerns over foul trouble bubbled to the surface in the third quarter, when Young drew two quick fouls on Simmons and scared the Sixers out of sticking with that look. Simmons seems ready to jump on Young from the start in Game 2, but he and his coach both opined that officiating will be a factor there.

"I thought Ben picked up a couple of fouls that, he picked up two fouls for playing defense, and that was frustrating to see on Trae, and then you had to worry about his fouls. I thought Matisse picked up, I was very surprised, and I'm gonna have to get an explanation of how that called wasn't overturned. I don't know what more solid defense you can have. And they still give the kid two free throws, so we have to check because it felt to me that Trae was the one initiating most of the contact with his hands and pushing off, but we're the ones that just kept getting fouls. So either we're doing something wrong or we have to figure out how to make sure that's called on him as well."

We shall. Even if the Sixers continue to drop, a bigger and more athletic defender coming around the screen can potentially make a huge difference.

The Sixers have been playing with fire all season when they go to an all-bench unit to buy time for their starters to rest. Game-to-game results have been all over the place, but the good performances have not been enough to persuade anyone to think this group would hold up against good teams. Doc Rivers may be the lone exception.

With the Sixers already down double digits late in the first quarter, Rivers decided to take a chance with a cast of all backups. Philadelphia was down 11 when the final Sixers starter (Seth Curry) subbed out of the game with around 40 seconds left in the first quarter. By the time Tobias Harris was back on the floor with about 10 minutes left in the second, the lead had ballooned to 20. Had the Sixers simply played to a standstill in that stretch, they may have emerged victorious.

Rivers would avoid going back to the well in the second half, which suggested he might be abandoning that look the rest of the series. Not so fast, Rivers said after the game, because everyone was terrible in the first half.

"We'll see, I mean tonight it didn't work, but neither did the first group early on," Rivers said. "Both teams were in the minus department. But we typically like one guy, like Tobias or Ben, with that group. We just played them so deep in the first quarter because we were down that it took us out of our normal rotation."

Considering how often we saw the all-bench group this year, that feels like a flimsy excuse, and staggering your stars is something that should be at the forefront of your mind going into a game. When the Hawks run out an Okongwu-Gallinari-Huerter-Bogdanovic-Williams lineup, they are begging to be exploited on the defensive end. Leaving that to a group of second-unit players, rather than letting your stars attempt to do so, is a foolish proposition.

The only caveat here is that the bench group could not have played worse, far worse than even critics like me would have expected. Tyrese Maxey stepped out of bounds trying to get a last-second shot to end the first quarter, Dwight Howard missed a point-blank look at the rim, and George Hill was not the stabilizing force they needed, ending the game a team-worst -17 and offering very little at either end. He may very well play a big role in this series if he plays with the right supporting pieces, but he did nothing to put out the fire.

Over and under helping

The Hawks set a new franchise record for made threes in a playoff game with 20 in Game 1. Someone invested in the game might look at that number and call it unsustainable offense. There's truth to that, but the Sixers also did their best to give Hawks role players a chance to get going.

Simmons was a surprisingly big culprit here. Taking the Bogdan Bogdanovic assignment, Simmons had a little bit more room to cheat away from his man than he would if he drew Young to start the game. But he ended up too far on one end of the spectrum, drifting toward the paint and opening up shot opportunities for Bogdanovic on the perimeter. He did almost everything right for most of the opening possession of the game, for example, only to drift just far enough away from Bogdanovic with Embiid in a perfect position to defend the paint, conceding a shot that Atlanta will take basically every time. Simmons is in the area, but not doing anything to bother this shot:

He was far from the only culprit, with Philadelphia slow on the draw throughout the first half, but you expect guys like Seth Curry to miss assignments or make questionable decisions away from the ball. It's something Simmons has largely cleaned up since his rookie year, but the opening quarter of the game featured a fair few possessions like these. When Simmons is at his best, he's anticipating what's coming next, not reacting to what his opponent is doing.

Good defense is built on trust, determining when you need to rotate, where your teammates are supposed to be, when you can let someone else handle an assignment, and when you need to go off-script to make momentum-shifting plays. All season, the Sixers struck a good balance between the chaotic (mostly Thybulle) and the composed. But with Young cooking in the first half, they allowed him to draw all their attention, leaving them one pass away from being exposed.

For all of Danny Green's issues, he can't be expected to guard two different shooters at once when the ball is kicked out, and no one even bothers to feign interest in helping him out.

Philadelphia's buckle down in the second half showed flashes of who they'd tell you they really are, and the adjustments they have to make are relatively straightforward. But losing a home game Embiid plays and plays well in is a tough pill to swallow, and this ultimately felt like a preventable loss. On to Game 2.