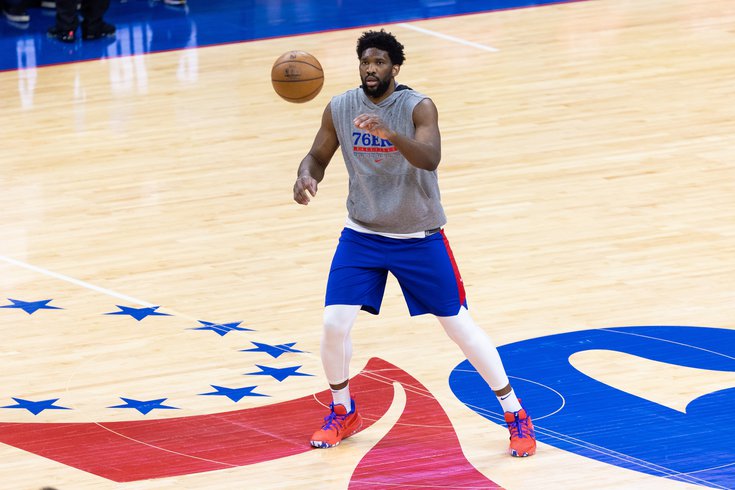 Philadelphia 76ers center Joel Embiid warms up before Game 5 despite not playing after injuring his knee in Game 4.

Joel Embiid's partially torn meniscus is the talk of the town at the moment, with everyone attempting to guess what the injury means for the big guy and the Sixers as they attempt to chase a title. Following the Sixers over the years has required having at least some understanding of most major athlete injuries, ranging from food allergies to shoulder issues.

Instead of pretending to be doctors ourselves, we put in a call to Dr. Mark Pollard at the Cooper University Health Care Bone and Joint Institute. Dr. Pollard specializes in the management and treatment of knee ligament and cartilage injuries, knee arthritis, shoulder instability, shoulder tendon problems, and other muscle and tendon problems of the arms and legs (biceps, triceps, patellar and quadriceps tendon, and Achilles tendon). He has covered high school, collegiate and professional sports teams in his line of work.

Here's what an actual expert had to say about the type of injury suffered by the Sixers star...

Dr. Mark Pollard: To begin with, each knee has two menisci, a medial meniscus, and a lateral meniscus, and both of them generally function as shock absorbers and stabilizers. We think their main function is actually absorbing force as you're bearing weight on the knee. The femur is your thigh bone, and the tibia is the shinbone, and force has to be transmitted across the joint. And so at the joint, you have cartilage at the end of the bones. But also you have these menisci, which, if you're mechanically inclined, they kind of look like bushings. They move a little bit along with the knee to allow them to better distribute the force. And, as I said earlier, they also serve to stabilize things beyond what the ligaments do.

So for an athlete, in practical terms, it's primarily there to absorb.

In their updates on the injury, the Sixers have referred to this as a "small" tear. Does this mean anything in a practical sense, or is a tear a tear regardless of the size?

Yes, there's kind of a world of difference here, no two tears are the same. You could have what is in essence a very tiny, small tear, where just a couple of millimeters are involved. In which case, it doesn't involve a whole lot of the meniscus and it's not a real structural problem, so the end result may be minimal. Whereas if you had a larger tear, you can have a tear that goes all the way through the meniscus and actually renders it incompetent. And that can be devastating to a knee, necessitating surgery, and sometimes in some cases, it could be actually career-ending to high-end athletes.

Got it. Assuming that a small tear is something an athlete maybe tries to play through or play with in some form, after this is discovered by doctors, is there a point where this can be deemed "safe" to play without a procedure? Is it as simple as pain and symptom management, or is there more to it than that?

It's a little bit of a slippery question. But if the tear doesn't involve, for example, an unstable flap — a piece of the meniscus that can actually flip and get stuck in the wrong spot — and if it's in a location that's unlikely to propagate and get bigger, then it's possible to go on without actually doing anything for it. There's probably many athletes who have some small meniscus tears and don't even know it because they're not very symptomatic. And if they get an MRI of their knee for some other reason, then they're discovered that way.

So can this self-correct? My layman's understanding of the meniscus is that there are two approaches to addressing the problem in the event of a procedure, shorthanded to "repair or remove." Is that accurate, and what are the pros and cons if it's necessary to go that way?

You're right, if you're going to do a procedure on the meniscus, it's either going to be a meniscus repair, where you're trying to stitch it back together, or a partial meniscectomy where you remove the torn piece. And if you were to choose long-term function, it's better to do the repair, you're better off trying to retain as much meniscus tissue as you can. In the long run, unfortunately, a lot of the patterns of tears don't really make themselves amenable, it's not really possible to repair them, because they won't heal. The meniscus doesn't have a really great blood supply, so it doesn't have a great healing capacity. It's a fairly narrow spectrum of meniscus injuries that lends themselves to being repaired.

However, the repair, it's a longer surgery, the recovery takes a lot longer, but long-term function is typically better with that, as opposed to the meniscectomy procedure, where you "nibble" the meniscus tissue out, which is typically a quicker surgery, a much quicker recovery to get back to activities, but it increases the possibility of some problems developing down the road.

Most of the time for a meniscus repair, for the stitching, recovery is usually three to six months or something like that. Whereas the partial meniscectomy, they're removing the meniscus tissue, and you remove as little as possible obviously, but for that kind of a procedure, you're pretty much walking on it right away. And, you know, full activities, somewhere between three to six weeks afterward, in most cases.