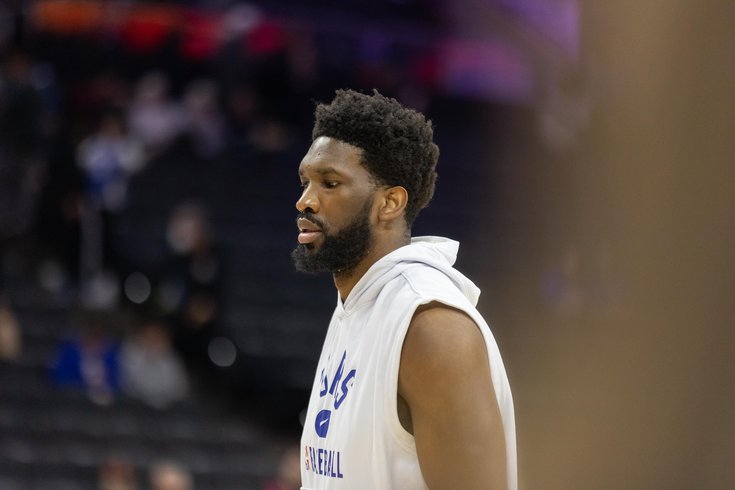 Joel Embiid stands on the court before the start of the Sixers' game against the Raptors at the Wells Fargo Center on March 20.

Getting to see most of an NBA practice is borderline impossible unless you work for a team these days, so it was quite a shock when the NBA allowed every man, woman, and child with the NBA app to watch almost all of a Sixers training camp session on Thursday. We got to see the team work through drills, animated conversations, and do what most NFL reporters get to see every day during the preseason. A nice change of pace.

I won't sit here and tell you I charted every shot and miss, with due respect to anyone who chose the path of an Eagles beat writer, but here are some running notes from watching the Sixers over the course of about two hours in Charleston.

• The most animated moments of this practice came as the top unit — Embiid/Tucker/Harris/Maxey/Harden — struggled to find ways to get Embiid the ball with four-out basketball. And Rivers drove this point home for what felt like most of an hour of Thursday's practice, the head coach having numerous conversations about the problem with individual players and the team as a whole.

During an extended conversation with Tobias Harris, Rivers specifically brought up Philadelphia's post offense compared to how things run in Denver, even mocking Nikola Jokic's running style as he noted that how the entire Nuggets team is bought into doing what it takes to move the ball and find their center. By comparison, Rivers said, the Sixers did a whole lot of standing around and waiting for Embiid to be more open than he needs to be.

"Our spirit is bullshit!" was what Rivers said to the entire group at one point, referring to Philadelphia's lack of zip as they moved the ball (or didn't move the ball) to find Embiid at the elbows. Noting that he was the leading scorer in the NBA a season ago, Rivers made sure to let his guys know they should be thrilled to have the opportunity to both get Embiid the ball and to use the attention teams give him to their advantage as individual scorers.

That being said, Embiid was not doing himself any favors, as Harris and Rivers agreed on while chatting. All parties have to be working hard and fast to get into advantageous positions, and you could tell this was a practice-level effort rather than a game-level effort from the guy on the block. When the top group ran things at game speed, they looked a whole lot better. Big shocker there.

• If I had Tyrese Maxey's energy, I feel like I could conquer just about anything I put my mind to. He's basically the perfect guy to mic up for a practice like this, as he's young enough to probably enjoy the experience a little bit. I can only imagine the eye rolls if one of the older vets had to do such a thing.

One play from Maxey jumped out for me — turning the corner going left out of a dribble handoff, Maxey was able to fire a pass from the free-throw line extended to a shooter in the opposite corner, placing it perfectly in the pocket with excellent velocity. There was a similar play made late in the practice once the group moved to a scrimmage, made from the other side of the floor on the second occasion.

We know Maxey can create for himself, but his ability to create for others is paramount if he's going to become the player they hope he can be. The other thing we saw Rivers emphasize in the dying moments of practice? Making sure they get Maxey the ball when they're on the break. Utilizing Maxey's speed (and that aforementioned pixie stick energy) is something they need to do early and often this season.

• There was a moment of real anger/frustration from Embiid over what he thought was handsy defense from Paul Reed. Embiid opted to slam the ball into the floor in frustration, making it known that he thought Reed had fouled him. That came and went pretty quickly, with the Sixers continuing with their drill once Embiid had collected himself, but it was a good look into what we miss with most of these practices completely out of view.

I'm not going to sit here and tell you Reed fouling Embiid (or fouling anyone) is a good thing, but this shows to me that Reed is doing his job as a backup big. He's battling and being a pain in the ass to challenge their best player, regardless of the weight difference between the two players. Harrell ultimately took that spot on the blue team when the Sixers scrimmaged, but Reed will keep battling to find his spot on the floor.

One thing I liked seeing was Melton speaking up and joining Shake Milton to guide/direct their unit when they were in a huddle with Rivers discussing different playcalls. It's not always easy for new guys to walk into a team and lead, so Melton working to take ownership of the second unit is encouraging.

• I don't remember seeing a ton of makes from Harris on these shots, but he continued the trend of quick-release threes when he had opportunities throughout Thursday's practice. Getting him to let it fly has been half of the battle since he arrived here, and if he builds on the approach we saw at the end of last season, they'll be in a better position to win.

• In small doses, I thought Jaden Springer looked pretty good during practice. Some of that is that his unit of end-of-bench guys played a bit harder than the entrenched rotation guys, but credit where it's due.

• Doc Rivers discussing how the offense should run with James Harden: "It's a pecking order, this ain't a democracy."

• James Harden thinks he can get Embiid at least eight points a game without Embiid having to do basically any work to get them. Speak it and play it into existence.

• Seriously, NBA, thanks for doing this. Getting to actually watch practices with your own eyes instead of relying on canned answers about the day is great. Big upgrade.