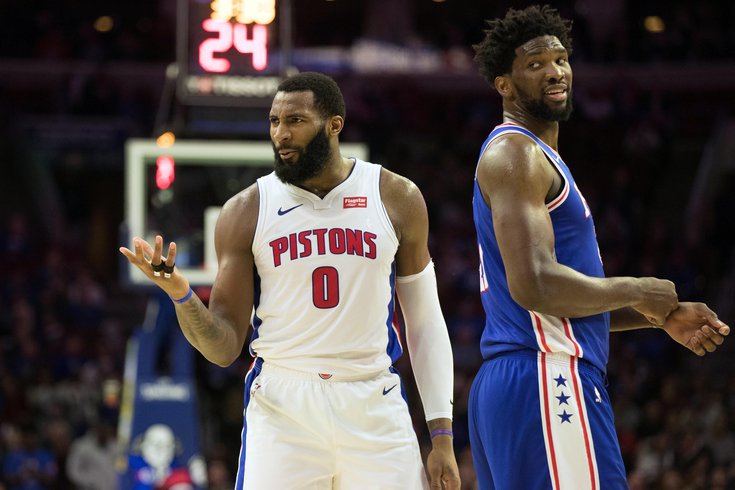 The NBA fraternity is a tight community, roughly 500 of the best players in the world who know each other inside and out. Smaller roster sizes make for a lot of personal rivalries compared to other sports, and it's usually easy enough for players who don't like each other to avoid one another if they must.

For a while, Joel Embiid and Andre Drummond really didn't like each other. Embiid took matchups with the former Pistons big man personally, called him a "bum" on social media, suggested he didn't play defense, and seemed to delight in humiliating Drummond whenever they played. Drummond fired back by pointing out Embiid was not worth taking seriously until he could play in back-to-back games. Not exactly the foundation of a bromance.

Thursday afternoon, Drummond had his first chance to speak with Philly media since agreeing to sign with the Sixers on a minimum deal. And the first order of business was leaving the past where it should be.

"I think for me, there was never any real beef. At the end of the day, it's the game of basketball. It's a heated game, we're both competitive., the way we play sometimes we talk, and I don't think it ever goes any further than that. I don't think there's any real beef or any kind of malice towards each other," Drummond said Thursday. "We're on the same team now, it's nothing that I'm thinking about."

That (likely) won't stop fans on social media from having a field day anytime Embiid and Drummond interact for a while. After the two were spotted dapping up in Philadelphia's weight room on Wednesday, Twitter was set ablaze with memes mocking the uneasy truce between the two men. The public would be forgiven for taking a wait-and-see approach to these two working together — instead of being asked to play against one another four times a year, they'll travel together, compete in practice together, and get even more familiar with one another as the year winds on.

Things have certainly changed for both men since the height of the squabble. Embiid has gone from rising star to MVP candidate, gaining valuable perspective as he has cleared major milestones in his personal life, fatherhood the most prominent example. Drummond has watched his star fall considerably, dreams of $100+ million deals evaporating and leaving him playing a minimum-contract, backup role for the Sixers, a very good team but one still fighting to make it into the inner circle of contenders.

One of the big questions regarding Drummond is his ability to actually embrace that role. Dwight Howard's limitations showed up when it mattered last season, but his tumultuous career prepared and humbled him to the point that he has become something of a wise veteran leader. Drummond is much younger, just shy of his 28th birthday, and is still battling questions about his pliability as a basketball player. On his first day on the job here, he's at least talking a big game about his mentality.

"In life, things change. It's nothing that's affecting me at all and making me feel any kind of way," Drummond said. "That's the role that has been given to me, it's something that I've accepted and [am] willing to do. I mean, if it's in the best interest of the team winning,  it has to get done.

"Making the decision to come to Philly is based off of Doc [Rivers] really having the faith in me to really help this team do something special. Despite whatever my role is — me coming off of the bench and being in the prime of my career — doesn't really matter. I can still be effective coming off the bench and backing up Joel. I think it was a no-brainer."

Drummond will ultimately have to back that talk up with action. His arrival in Los Angeles was heralded as a potential title-shifting move last season, only for Drummond to flame out spectacularly and lose time and touches as the Lakers' season unraveled in round one. His career, season-to-season or even moment-to-moment, has been a case study on the importance of mental focus and understanding one's limitations. When he strings together possessions and buys in to a team-based concept, Drummond's physicality can be overwhelming. But his tendency to go off-script, missing reads or assignments at either end, have led to frequent appearances on NBA lowlight reels.

In that way, he is well-suited to step into Howard's shoes, a season following Howard's collection of poster dunks and mind-numbing fouls. And this is a situation where Drummond will have the tools to get better and rehabilitate his career in the hope of getting a big payday — many of Philadelphia's role players improved defensively under the watch of Rivers and Dan Burke, and Drummond will be able to play high-impact, high-intensity minutes as a reserve while filling in for Embiid on his days off, showcasing his talents for a team who might gamble on him down the line.

The key, then, is for Drummond to show that he understands who he is and what he's here to do.

"At this point in my career, I think it's pretty set in stone what my job description is," Drummond said. "I'm content with what my job is now, it's brought me this far in the NBA. So in terms of like revamping my whole game and becoming a different player, it's something I don't foresee. I think at the end of the day, a strong, solid big is something that's always needed in the NBA."

If he lives up to his words, he might carve out a role here, and perhaps even make an unlikely friend in Embiid. But living up to his end of the bargain has been the rub for Drummond across nine NBA seasons, and time will tell if this is the moment where it all finally clicks.