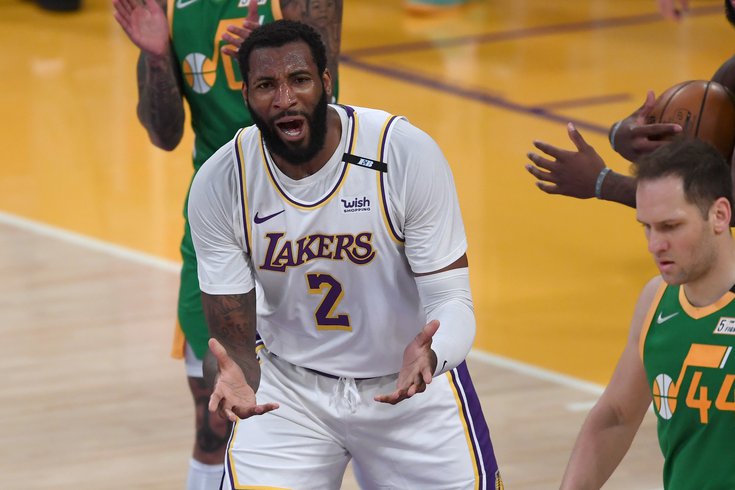 The Sixers have signed center Andre Drummond to a one-year deal.

The Sixers are signing center Andre Drummond to a one-year, minimum deal, a source told PhillyVoice on Tuesday afternoon. ESPN's Adrian Wojnarowski was the first to report the agreement.

To say this one is out of left field is a pretty significant understatement. If Sixers fans know Drummond for one primary reason, it's the years-old feud with Joel Embiid that dates back to the early days of Embiid's tenure in Philadelphia. Embiid has consistently taken shots at Drummond over the years, claiming he doesn't play any defense and going so far as to call him a "bum" in a tweet from 2018:

I own a lot of real estate in @andredrummondd head and I’m on my way to build more 🏘🏘🏘 #Bum #TheProcess pic.twitter.com/Mrf2NcNL4r

In the years since Embiid has cooled down on social media, and Drummond's star has fallen pretty significantly, with Drummond's dreams of big money in free agency disappearing. Getting him on a minimum deal makes this a low-risk play for the Sixers, but there's plenty to figure out for Philly now that they've signed the guy we assume will be their backup center.

At his best (and frankly, even at his worst) Drummond is a rebound-snatching machine, particularly on the defensive glass, where he has consistently been among the best players in the NBA at ending possessions. Physically, Drummond is an imposing figure in the paint, at least when he isn't up against a guy like Embiid, capable of shoving opponents out of the way and punishing teams for trying to play small against him. He's a big target on lobbed entry passes who will certainly hurt you if a smaller player ends up on his hip, though he's not the sort of lob target a guy like Dwight Howard is (few people are). Drummond is a strong finisher around the basket in any case, which will be to the benefit of Philly's young guards as they find their way this season.

The wild card aspect here is Drummond's personality, which we'll characterize in this space as "offbeat." Normally you'd save this sort of analysis for further into a piece, but Drummond's personality seeps into his game in ways that are hard to predict. When he's locked in, Drummond is a glass-cleaner who can block shots, create steals, and help your basketball team. But his focus has been a constant issue during his time in the league, leading to head-scratching possessions on defense and a lot of black-hole possessions on offense.

I don't use this in an attempt to sum up Drummond's game, but you do run into these moments from time to time with him:

Andre Drummond with what may be the most incredible offensive possession of all time pic.twitter.com/SUgpw6lDnq

If you're a glass-half-full reader, you could look at this situation and think Drummond going from billing as "the missing piece" for the Lakers last season to a minimum contract and guaranteed bench player could snap him to attention, inspiring career-best ball. It might be a little bit early for Drummond to have his come-to-Jesus moment — he's still only 27 years old — but backing up a former rival who was in MVP talks last season might be the motivation Drummond needs to get his career back on track. That has to be what Daryl Morey is thinking bringing him in, and this definitely fits the executive's M.O. as a move that bets on talent and tries to push risk/downside to the back of your mind. A rejuvenated Drummond who locks in for a year would be pretty appealing, though the team fit is another matter entirely.

And that's the most interesting part of this — Drummond is as bad, if not a worse fit than Howard was with Ben Simmons, inspiring all sorts of questions about the plan in place here. While it's easy to say that a minimum signing should be easy enough to push aside if it impacts one of their star players, the same was true last season, and Doc Rivers ultimately ended up playing Simmons and Howard together in their climactic Game 7 loss to Atlanta. Pump the brakes on using this move to forecast Simmons' future, but feel free to raise your eyebrows.

The Sixers were pretty much always going to bring in a veteran big rather than relying on one of their young guys to be Embiid's understudy, especially given his tendency to miss time every year. Even still, Drummond would not have been one of the first 10, 15, perhaps 20 names you would have guessed they'd go after if you tried ahead of free agency. But he's their guy now, and we'll see exactly how that works in the locker room and on the floor soon enough.