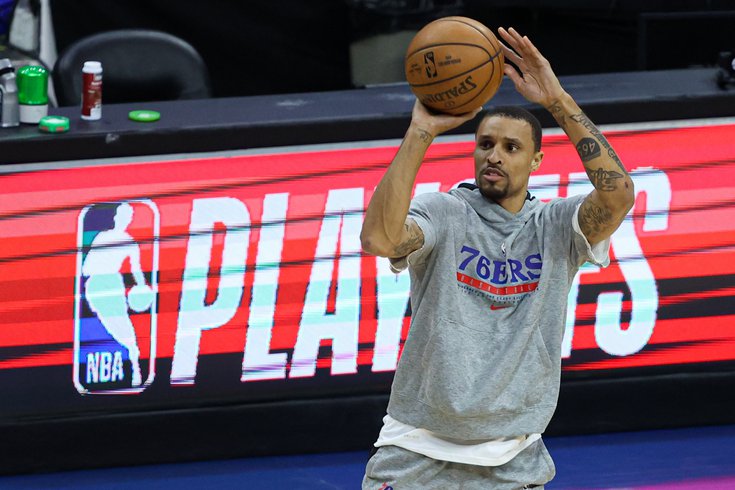 UPDATE: The Sixers announced Tuesday evening that they waived George Hill, who is aiming to sign with the Milwaukee Bucks once he clears waivers, according to Shams Charania.

The Sixers plan to waive guard George Hill, a team source confirmed to PhillyVoice early Tuesday morning. Shams Charania of The Athletic was the first to report.

The move isn’t a 100 percent certainty at this point, and the Sixers have until 11:59 Tuesday evening to make the decision, but all signs point in this direction as of now.

Acquired by Daryl Morey at the trade deadline in late March, Hill would not make his Philadelphia debut until April 19th as he continued to recover from hand surgery. With just about a month to get on the same page with a brand-new team — and a team expected to try to compete for a title — Hill was in a tough position from the start, though he did show flashes of competence during their soft closing schedule.

The playoffs were a different story, with Hill's ineffectiveness in the second round contributing to Philly's loss to Atlanta and the ever-shifting rotation Doc Rivers used against the Hawks. While never necessarily a primetime scorer, Hill never managed to score more than four points in a game in the second round, as he struggled to find a role as either the lead ballhandler of the second unit or an off-ball threat as a shooter. His hesitance to shoot, combined with a major efficiency swoon (Hill was just 2/9 from three in the Hawks series) was a surprisingly big deal for the Sixers, who expected a readymade playoff contributor when they acquired him.

In the end, Morey's first and only deadline move in Philadelphia was a  bust. The impact of losing Tony Bradley in the deal has been overstated locally — the young big man would have been an unlikely candidate to turn the tide in round two — but Hill ultimately provided very little for them during his short stint, and it came at the cost of several future draft assets (second-round picks in 2021, 2025 and 2026).

Cutting Hill makes all the sense in the world based on what he showed while he was here, though there are some questions that flow out of this decision. Hill's fully-guaranteed salary for next season would have been slightly bloated, but that contract had the potential to be a useful salary-matching piece in trades down the road (or even before the season started). That's off the table now, so the question is what it means for other Sixers moves.

Are they lining something up that will subject them to the hard cap, e.g. a sign-and-trade move, forcing Daryl Morey to consider each dollar and cent a bit more? A sign-and-trade isn't the only hard-cap trigger, and perhaps this means Philadelphia is lining up a move that requires the full mid-level exception (worth roughly $9.5 million).

(There's also the possibility this is a mandate from ownership to cut the eventual luxury tax bill, though given the team's recent decision to purchase a second-round pick, that would run counter to what we've seen from their offseason to date.)

Frankly, a move that hard caps Philadelphia would have to be pretty impactful to justify the downstream effects it could have on the team. Should the Sixers eventually move closer to trading Ben Simmons for another star (say, Damian Lillard), they'd have already limited their options for trade iterations. Heck, that's true even if they're just trying to swing a small trade to upgrade the team later, the apron number (approximately $143 million) looming over everything. Signing a player who is gettable for less than $10 million a year doesn't feel like it would override the potential downside they'd deal with down the road.

We’ll find out precisely why Philadelphia decided to move in this direction soon enough. Stay tuned.