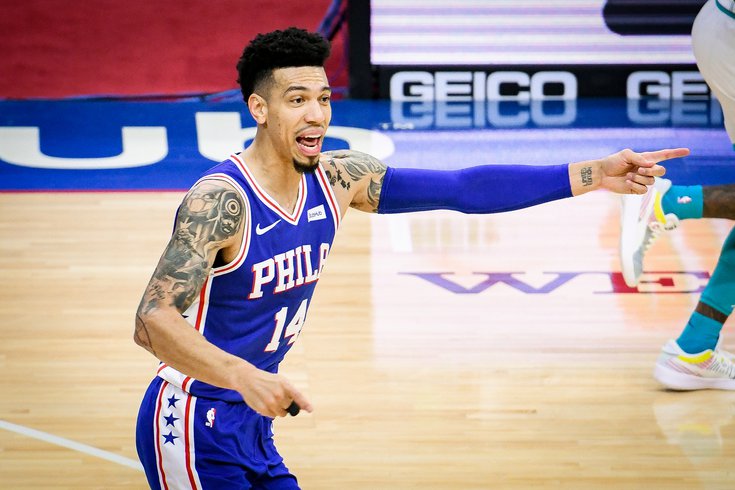 Danny Green is back with the Sixers on a two-year deal.

The Sixers are bringing back Danny Green on a two-year, $20 million contract, with a team option on the second year, a source confirmed to PhillyVoice late Wednesday night. But that last bit was hardly necessary — the news was delivered on Twitter initially by Harrison Sanford, Green's podcast co-host on Inside The Green Room, a pretty reliable source on all things Green.

With due respect to Andre Drummond and Georges Niang, this is the most important move the Sixers have made so far in free agency. Green was a critical member of a hugely productive starting lineup that fits into just about any future iteration of this team, whether they make a major trade or stand pat. Green ended up turning in one of his better seasons of the past half-decade last year, seeing his three-point numbers climb back over 40 percent after a dip to the mid-30s playing for the Lakers in 2019-20.

He arrived there the way Green always does — bombing away from the corners. Green led the NBA in corner threes made per game, knocking down a blistering 43.9 percent of his attempts from either corner according to NBA tracking data. That's a valued skill on any NBA team, but on a Philadelphia team built around Joel Embiid and Ben Simmons, it made him a useful sidekick to both of Philadelphia's brand-name stars, ready for a swing pass when Embiid was doubled in the post or a kick to the corner following a Ben Simmons drive. Green's ability to relocate from corner to corner is a skill that you only truly appreciate when you watch him play every night, with the veteran able to use feints, leans, and some under-the-radar physicality to create separation and open a window for a pass to his spot.

The playoffs were more of a mixed bag for Green, who was excellent in round one against Washington and the source of anger in Philadelphia's Game 1 loss to the Hawks, his season ultimately ending in Philadelphia's Game 3 victory over Atlanta. Though Green's inability to slow down Trae Young (and other shifty guards throughout the year) was frustrating, it's an issue that can mostly be avoided with proper matchups. Green was a helpful, intelligent team defender for most of the season, and his willingness to do the little things on both ends of the floor was missed as their second-round series spiraled into chaos.

Philadelphia had little-to-no way to replace Green and his production if he would have walked in free agency. With the ability to pay him essentially whatever they wanted (at least within reason), balking on a deal would have inspired questions about the team's commitment to winning this year.

Beyond the obvious on-court stuff, Green coming back provides the Sixers with some additional continuity coming into next season, which could be even more valuable if major pieces end up changing around him. The contract is also a useful piece in potential trade talks down the road, should the Sixers need a bit of extra money in order to match salaries, and the team option would allow them to keep Green around for another season at a fair number should he continue to produce this season. There's value all across the board.

We'll now get to see how Green and the fans embrace one another after his hotly-contested comments about their approach this summer — and frankly, I thought the whole thing was way overblown — but the Sixers have delivered on an early offseason claim. After Green told reporters Doc Rivers said he'd be back during their exit meeting interview, the Sixers went out and delivered, albeit in a more nerve-wracking fashion than you might have expected.