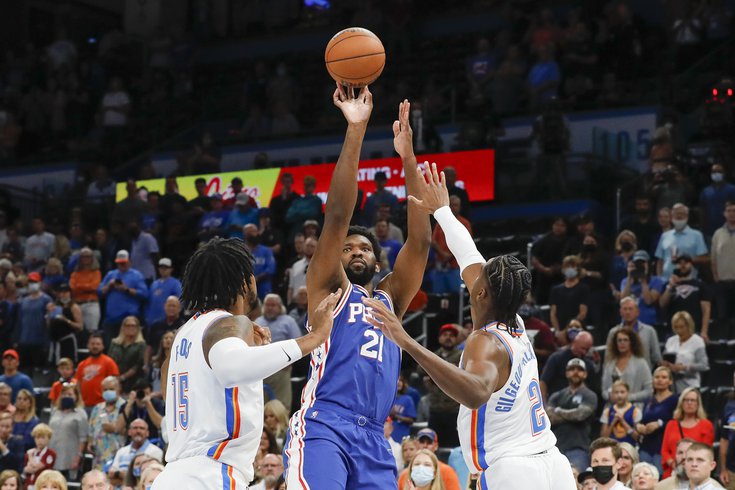 At end of the fourth quarter of the 76ers win over the Oklahoma City on Sunday, Joel Embiid rejected a shot from Thunder guard Josh Giddy that sent the rookie flying into the stanchion. The reaction from broadcaster Alaa Abdelnaby that angered some fans.

The 76ers got back in the win column Sunday night with a 115-103 victory over the Oklahoma City Thunder, led by a 28-point performance from Seth Curry and a reliable night at the office from Joel Embiid.

Entering Sunday's game, Embiid's status had been questionable due to lingering knee soreness. But with backup Andre Drummond ruled out with an ankle sprain, Embiid suited up and still turned in a dominant effort on both sides of the floor.

One play at the tail end of the game has angered some Thunder fans and Australian followers of rookie guard Josh Giddy. The Sixers held a comfortable 13-point lead with less than two minutes to go when Giddy got out on a fast break and went in for a dunk. Embiid threw himself into a leaping block and absolutely blew up the play, sending Giddy into the stanchion at full force.

Sixers announcer Alaa Abdelnaby, concerned by Embiid's reckless abandon on the play, defended the energy he brought but vented that the Sixers star probably would be wise to go easier on his body in game situations like that. In the process of discussing Embiid, Abdelnaby brushed aside Giddy's hard fall.

Josh Giddey was on the receiving end of this bruising foul from Joel Embiid. pic.twitter.com/YvnafS8zFv

"My question would be, well, why are you still running fast breaks?" Abdelnaby said of the Thunder. "If you don't want us to play hard, why are you running hard? ... I just worry about when (Embiid) falls. No offense to Giddy, I could care less. But this guy, I don't want to see him fall awkwardly, because you worry as a Sixers fan."

Abdelnaby's remarks about Giddy — who had a nice stat line of 19 points, 7 assists and 8 boards — got under the skin of some fans who watched the game.

Alaa Abdelnaby is straight garbage and Sixers organisation should be ashamed to have @alaatweets on their commentary team.

Shout outs to Josh Giddey for a great game that should shut up all the draft-night haters.

And the opposite of a shout out to Alaa Abdelnaby for this pretty disgusting call when Embiid wiped the 19 year old out. Come on, man. https://t.co/4kDrYI7xmz

@alaatweets Alaa Abdelnaby is straight trash for saying this remark about a rookie: I’m just worried about him (Embiid) when he falls. No offense to Giddey, I could care less. But this guy (Embiid), you don’t want to see him fall awkwardly, because you’re worried as a Sixers fan.

@alaatweets Alaa Abdelnaby’s “I could care less” comment was extraordinarily stupid on two fronts. First, the sentiment of the comment was disgusting and secondly, is his apparent inability to actually get the phrase correct. Pull your head in mate. #nba #OKCThunder #joshgiddey

There also was a colorful discussion about Abdelnaby's call on the r/NBA subreddit, which isn't the most civil discussion board, to the say the least.

Did Abdelnaby cross a line here? He definitely should have phrased his feelings a bit more respectfully, but it was clear that Giddy and Embiid kept their heads about them and that no one one was seriously injured on the play. It wasn't Abdelnaby's finest moment. It also wasn't as malicious as his critics are making it out to be.

Team-specific broadcasts always have a bit of a hometown bias, and Abdelnaby should be more aware that Sixers fans aren't the only ones watching. His main point was simply that the Thunder's aggressiveness in that situation invited a stout defensive response, so it doesn't make sense to complain about Embiid's thunderous block.

It would be more sensible for Sixers fans to be frustrated that Embiid, in particular, put himself in harm's way to stop a bucket that likely wasn't going to impact the outcome of the game. The comment about Giddy was made to illustrate Embiid's importance to the Sixers. It just came across as tactless, and maybe it was.

As is usually the case in these situations, the pitchfork reaction becomes more troubling than the offense. As of Monday afternoon, Abdelnaby had not said anything about the situation or offered an apology.

Abdelnaby and Sixers broadcast newcomer Kate Scott have gotten off to a solid start after the retirement of Marc Zumoff, who called Sixers games for 27 years. This is a blip on the radar, but Abdelnaby would still do well to remember Sixers fans aren't the only ones listening.