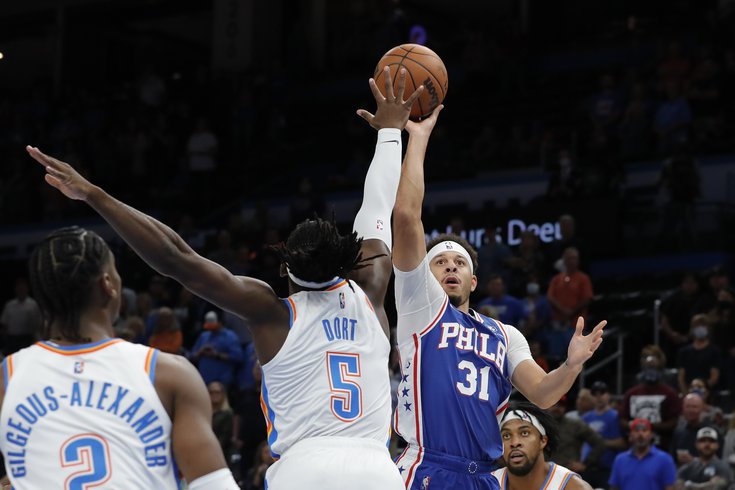 Seth Curry had himself quite a first quarter Sunday night.

The Sixers rode Seth Curry early and got a strong all-around performance from Joel Embiid in a 115-103 win on the road against the Thunder on Sunday night.

• Whoever got through to Seth Curry and turned him into the guy he has been since the start of the Atlanta series in June deserves a raise. Without an out-and-out point guard, the Sixers' offense has nonetheless hummed basically whenever Curry is on the floor because of his ability to bend the defense and punish any lapse from the opponent.

Even by his standards, though, Curry went absolutely bonkers in the first quarter on Sunday night, nearly matching his older brother's national TV performance from last week. Curry poured in 23 points on 8-for-10 shooting (6-for-7 from beyond the arc) and looked completely unbothered by whatever the Thunder threw at him. There were some errors from Thunder defenders along the way — Lu Dort helping off of Curry in the corner is an unbelievable gift — but it likely wouldn't have mattered even if they played perfect defense against him. Philly was sending screen after screen his way to get him free, and when the Thunder made the (understandable) decision to send doubles at Embiid, the ball would eventually find its way to Curry's waiting arms in the opposite corner.

Unfortunately for the Sixers, Curry cooled off considerably following the first quarter. But getting more shot attempts from Curry is a stated goal within the organization, so seeing him put together stretches like this has to excite a lot of people with the team. The partnership with Embiid continues to improve with each passing day.

• Embiid was a game-time decision on Sunday, his status in doubt because of the knee soreness that limited him at times in Friday's loss to Brooklyn. You would not have guessed it from watching him, with Embiid announcing his presence via a hellacious, borderline disrespectful block of Darius Bazley at the summit in the first quarter:

Embiid has had some issues on offense so far, primarily as a face-up shooter, but his rim protection and pick-and-roll defense have been tremendous, often the only thing propping up leaky perimeter defense. Blocks like these stand out, but Embiid has been a joy to watch play-to-play as he soars through the air and alters shot attempts at the rim.

The other end has been somewhat of a mixed bag, with Embiid's midrange jumper mostly absent so far this season. But his preseason commitment to passing the ball has continued into the regular season, with Embiid cutting back on his field goal attempts as he looks for more ways to get teammates involved. Crosscourt passes out of doubles are being made more frequently, Embiid has routinely lobbed entries over the top for Harris layups, and the big man has even successfully played point guard in transition, hitting shooters in the corner rather than barreling into defenders in the painted area.

If we assume his face-up game will come around at some point soon, we could be very close to seeing the most dangerous version of Embiid we've ever seen. He is showing trust in his teammates, and they're rewarding him with a lot of made jumpers, which is all you can really ask for.

• Danny Green's struggles on the defensive end notwithstanding (and we'll get to those at some point later), it was nice to see him bounce back after his horrific finish in the Brooklyn game. He's probably the guy you'd worry the least about bouncing back from a tough night, but it's always nice when one of your key guys bounces back sooner than later.

• Paul Reed didn't get a ton of burn on Sunday night in spite of Andre Drummond's absence, but he held his own in limited action, doing all the things we've seen him do against lesser competition in the G League. The shooters will get a lot of the credit for Philadelphia breaking the game open early in the fourth quarter, and they got there with a few pushes and shoves from Reed, who did the dirty work.

My favorite sequence of the game for Mr. Bball Paul — Reed came down with an offensive rebound early in the fourth quarter, and rather than taking a panicked shot at the rim or trying to do too much, he collected himself, searched the floor, and found an open Georges Niang on the perimeter. Three points later, Niang was fired up about the read his young teammate made, encouraging Reed as they went back to the bench for the ensuing timeout.

(That's a good example of the value Niang offers beyond the box score production, while we're on the subject. The veteran marksman always seems to be chatting with teammates and lifting people up rather than pointing fingers or looking for someone to blame when things go wrong, and that work seems to be reflected in the unity of the bench mob. Niang also rediscovered his shooting touch on Sunday night, which always helps you appreciate his contributions.)

The Sixers are going to have to live with some ugliness to turn Reed into a consistently impactful basketball player. That feels more palatable than trying to play ultra-small ball whenever one of Embiid or Drummond misses a game, so hopefully, we get to see some more Reed-Niang frontcourt minutes in the weeks to come to see what kind of damage Reed can do rolling to the rim and crashing the glass. The activity is always, always there.

• This was sort of a quiet night for Tobias Harris overall, and it was trending toward negative entering the fourth quarter, but a couple of key buckets in crunch time were enough to basically kill this game off. Would like to see a few more possessions per game where he either lets a semi-open three fly or he gets all the way to the rim instead of settling for a contested runner/floater.

• The Sixers are sort of justified using Tyrese Maxey the way they do in the starting lineup given how Seth Curry is shooting the ball right now. No reason to run pick-and-rolls with your second-year guard and Embiid when you can run absolutely any action with the team's best shooter and Embiid. But if you're going to have Maxey, for example, standing in the dunker's spot or the weakside corner where he's reluctant to shoot, why bother having him in the starting lineup at all?

(I totally understand having someone in the dunker's spot when Embiid posts, mind you, but the smallest guy you have in the lineup? Not sure what the coaches are seeing there.)

Three games in, we are seeing a fairly consistent pattern — Maxey stands around doing nothing of consequence for most of the first half, comes to life when playing with blended units in the final 24 minutes, and the coaching staff struggles to get the most out of him for a lot of the game. And Maxey's presence has made the Sixers exploitable on the perimeter with their starting group, two defensive targets on the floor at a time between him and Curry.

Regardless of who you'd like that fifth guy to be, it seems obvious that Maxey himself would gain more as the sixth man, with more opportunities to actually run the offense and attack. Every time the Sixers dial up his opportunities with the ball in his hands, he starts to get going, so why not make that the sole focus of his night in a reserve role?

The Furkan Korkmaz at point experiment has been successful enough that I think you could put him with the starting group and immediately benefit from the increased utility Korkmaz offers as an off-ball threat. If Maxey eventually develops into a credible and willing catch-and-shoot guy, go back to the current starting look, but they have to tinker with the formula.

• Maybe it's just the expectation that a young player would take a step forward at some point, but Matisse Thybulle honestly feels like he has gone backward as an offensive player at this point. There have been increased opportunities for him to cut into space and numerous opportunities to score with nothing more than one or two dribbles from the arc, but he still looks like he's juggling a hand grenade whenever he has to self-create. The touch hasn't really been there either, though Thybulle's opportunities as a shooter/scorer have admittedly been pretty limited.

The Sixers desperately need him to add another dimension to his game so that he can be more of a full-time player. If he's not at least a reliable spot-up shooter soon, you have to recalibrate expectations for him moving forward.

• Don't like the early returns of the small-ball lineups built around playing Georges Niang at center. The Sixers have no ability to protect the rim with a combination of Niang-Harris in the frontcourt, and given the state of their perimeter defense right now, you could argue they need the rim protection more than they ever have.

When small ball is utilized by other teams, mind you, the Sixers are also in a rough spot right now. Former Sixers big Mike Muscala spent a decent amount of time at center on Sunday evening, and with Muscala dragging Embiid out to the perimeter, Philly's inability to stay in front of OKC's guards led to some ugly sequences in both halves. As good as Thybulle is on the defensive end, Shai Gilgeous-Alexander absolutely put him on skates at times in the second half, with Thybulle painfully aware he had no help behind him.

• The limitations of Point Furk became clear when Lu Dort got into his chest in the fourth quarter. Overall, I still think the Sixers are out way ahead on that gamble to start the year, but there were signs that the shine is wearing off.

• It's early in the season so there's no reason to panic yet, but it would be hard to overstate just how bad Danny Green has looked/moved so far this season. Unlike in the meeting with Brooklyn, where you could give him a pass for not being able to guard Kevin freaking Durant, Green's inability to stay in front of guys was disheartening in this one. Rookie Josh Giddey was going past Green basically whenever he wanted on Sunday night, causing a lot of breakdowns and creating opportunities for shooters that might have been converted if the Sixers were playing a real NBA team.

Defensive woes have been a common theme for Green early, and it's amplified by his need to take the toughest perimeter assignment most of the time he's on the floor with Ben Simmons out of the lineup. An optimist would say he'll look better once Simmons is back on the floor and taking top assignments, but a pessimist (or perhaps just a realist) would say that Simmons is likely to be traded for a starting guard, one who is not going to take defensive responsibility out of Green's hands.

Unfortunately, the Sixers don't have great solutions for this issue at the moment. Other options are either offensive liabilities or potentially even worse on defense.

• Embiid's competitiveness is admirable, but going all out for a transition block and collapsing under the hoop with a minute to go is just completely unnecessary. Risking injury for a meaningless play is no bueno.

Come on, man! Be smarter.