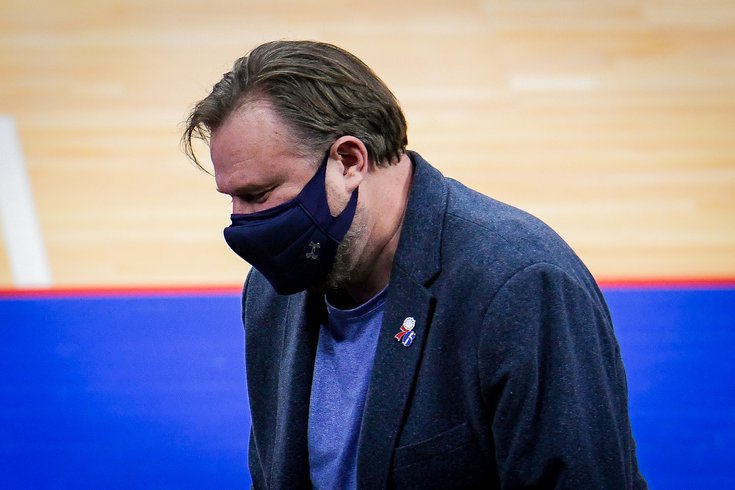 Sixers team president and GM Daryl Morey made light of Philly's loss to the Portland Trailblazers on Thursday night, appearing at Four Seasons Total Landscaping to claim the game was rigged.

The Philadelphia 76ers fell flat on their faces in the second half of Thursday night's 121-105 home loss to the Portland Trailblazers.

It was worse than the final score suggests, especially for game that was tied at the half. Philly was outscored 40-19 in the third quarter, even though Portland was without their formidable guard duo of Damian Lillard and C.J. McCollum.

A 37-point performance from Joel Embiid barely mattered, and Friday has been a welcome reminder that Ben Simmons (who did not play on Thursday) is more probably more important to the team's success than his critics might have you believe.

But hey, it was a back-to-back and the Sixers are still atop the Eastern Conference standings at 16-7. It's OK to take a bad loss in stride.

Sixers General Manager Daryl Morey decided the best way to handle the letdown was a visit to Four Seasons Total Landscaping in Northeast Philadelphia, home of the infamous November press conference where Rudy Giuliani claimed he had solid evidence the 2020 presidential election was rigged against Donald Trump. It inspired a zillion memes and themed merchandise, boosted sales at a neighboring sex shop and generally kicked off the ridiculous march toward our current impeachment proceedings against the former president.

So here's Daryl Morey, taking in the scene and proclaiming that the Sixers actually won on Thursday night.

WE WON THIS GAME @TRAILBLAZERS, BY A LOT! pic.twitter.com/EOwNw24bco

For a guy who has stepped in political manure before, Morey deserves a slow clap for this one.

As GM of the Rockets, he nearly lost his job over a tweet supporting protesters in Hong Kong, provoking the wrath of Chinese authorities and a basically forced apology at the behest of the NBA and its overseas business interests.

A year after the incident, Morey said he was comfortable with what he did in that instance.

Morey was even fined for tampering late last year thanks to an automated tweet that congratulated a career milestone for James Harden, his former superstar in Houston, at a time when trade talks were heating up and the Sixers were in the mix.

Morey's sense of humor and fan interaction are a breath of fresh air after years of Sixers fans dealing with the likes of Bryan Colangelo and Burnergate. Things are always nice at the outset — especially when you're winning — but even an ugly loss becomes a little more bearable when you can laugh about it.

The Sixers will get a chance to right the ship on Saturday night at home against the Brooklyn Nets.