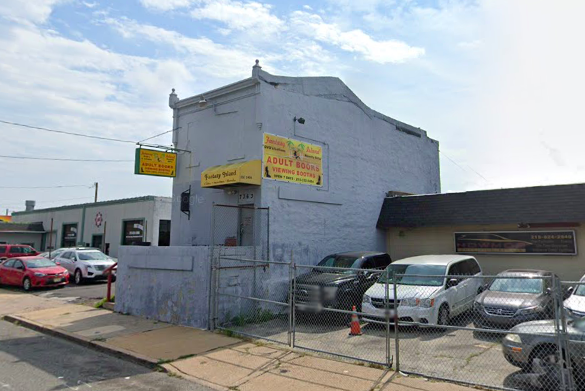 Fantasy Island Adult Bookstore, located at 7363 State Road in Northeast Philadelphia, has seen a boom in business since Rudy Giuliani held a press conference for the Trump campaign at the nearby Four Seasons Total Landscaping on Nov. 7, 2020.

Donald Trump's moribund presidency has become a laughingstock since his legal team held a Saturday press conference at Four Seasons Total Landscaping in Northeast Philadelphia, timed almost perfectly with the announcement that Joe Biden had won the election.

Though The New York Times has reported that the unusual location was chosen intentionally — instead of the much more logical Four Seasons hotel in Center City — the world seems more than ready to drop this in the column of alternative facts.

Would it look much better for the Trump campaign if they actually meant to hold the event in the middle of industrial nowhere, anyway? The president appeared misinformed when he first tweeted about it, prompting this hasty clarification from the ritzy hotel.

In Northeast Philly, Four Seasons Total Landscaping is surrounded by a crematorium and the nearby Fantasy Island adult bookstore. Since Saturday, the sex shop has enjoyed a major boost in business.

Our establishment is mobbed with customers the old Rudi Giuliani screwup has taken us to greater heights everybody’s got...

Owner Bernie D’Angelo elaborated in an interview with Slate:

Oh yeah. It’s helped me out. Matter of fact, if I knew this was coming, I would have definitely got in touch with a web designer, and also [gotten] some silkscreen-type things, to just put on a shirt because my Fantasy Island Facebook page has been blown up. I’m past 7,000 people commenting on everything that’s been going on. I had to order some more stuff and ask the companies if they could physically pick up some stuff at my distributors or actually ask UPS if we could fast-track some of it. People in the neighborhood forget about us because we haven’t done any major, major advertising. We could never afford advertising like this. This is worldwide. I don’t know if I’ll ever trend like this ever again.

D’Angelo, 57, said he took over the family-owned sex shop after working for years as an electrician and owner of several other businesses, including a pizza place and a bulk food store. He was stunned to see Saturday's events unfold before his eyes, from the Secret Service vehicles to the insane realization that Rudy Giuliani was using this desolate stretch of State Road as ground zero to cry foul over Philadelphia's electile dysfunction — allegedly.

After seeing Four Seasons Total Landscaping cash in on the frenzy with a t-shirt, Fantasy Island had considered doing the same. In a statement Tuesday, D'Angelo suggested those plans are on hold.

"We’ve been swamped with All types of Merch Request but that’s not up our alley at the moment," D'Angelo wrote in a Facebook post littered with grammatical issues. "When everyone’s gone will still be here and not sure who else is going to be with us so we’re concentrating what made us work for 40 years no disrespect to anybody but when it’s lightning strike disappears and dissipates we’re hoping to still be on top."

No shirts for now, but if you need lube, vibrators, magazines or videos, Fantasy Island is here to take care of you.