Many have tried, none have succeeded 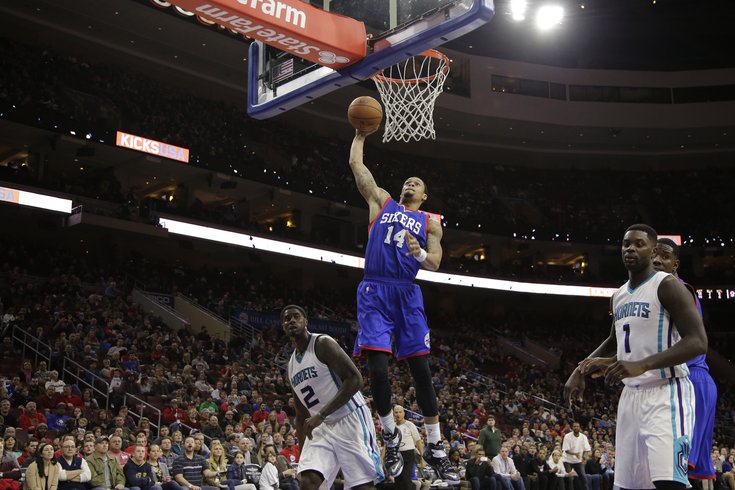 K.J. McDaniels throws it down against The Hornets.

LaVine's performance breathed new life in to a competition that has felt stale in recent years. It also marked the second time a Minnesota player won the contest, as Isaiah Rider won back in 1994.

While many Sixers' players have competed in the contest, none have ever taken home the trophy. K.J. McDaniels turned down a shot to participate this year, which is a bummer, especially after seeing the rookie's high-flying acrobats this season:

Maybe McDaniels will change his mind in seasons to come, joining a long list of dunkers that have represented Philadelphia during All-Star Weekend (Assuming he stays with the team).

The guys at Liberty Ballers already reminisced about a few of these performances, but here's a full history of the Sixers who have competed in the dunk contest.

Julius Erving doesn't need to defend his dunking credentials to anyone, considering he is one of the certified masters in the art. But despite being one of the all-time greats, The Doctor wasn't able to take home the crown either of the two times he competed. He came close during the 1984 contest, but finished 2nd to Phoenix Suns' forward Larry Nance, as a perfect score on his free throw line jam in the final round wasn't enough to get over a missed attempt on his previous dunk.

Jones was only a Sixer for one season, as he spent the rest of his career in independent leagues and playing overseas. But the highlight of Jones' tenure with the team was competing in the dunk contest, where he finished 4th. Jones performance featured pretty conservative choices, with the highlight probably being a reverse 'rock-the-baby' dunk on his second attempt.

"Baby Barkley" sported the short lived shooting stars jersey when he came in 2nd place during the 1993 contest. His first dunk, a windmill from the baseline, was pretty impressive. But the crowd is surprisingly tame, and as the announcer notes "That was a great dunk, I think people just don't know who Clarence Weatherspoon is."

A Temple graduate and native of Freehold New Jersey, Perry had a pretty average NBA career and a relatively forgetable dunk contest history despite competing twice. Finishing last in 1993 and 2nd to last in 1995, Perry's failure to complete the required amount of dunks in the first round (dunkers had to complete 3 in the 1st round) doomed him his second time competing.

Another Sixer who failed to make it out of the first round, Stackhouse wasn't able to live up to the hype coming in to the dunk contest, a trend that followed the player dubbed "the next Jordan" throughout his career.

A forgettable performance in a year that featured probably the most unforgettable moment in the contest's history, feel free to yawn while watching Larry Hughes miss all three of his attempts. Some credit is due for creativity for attempting to bounce the ball off the backboard between his legs during his second try.

"He got robbed!" If you want a detailed breakdown of why Iggy probably deserved the crown over Nate Robinson, Liberty Ballers explains it perfectly. In the meantime, enjoy what has been described as one of the most underrated dunks in the contest's history (2:50).