Embiid currently is receiving from a facial fracture and right thumb sprain. 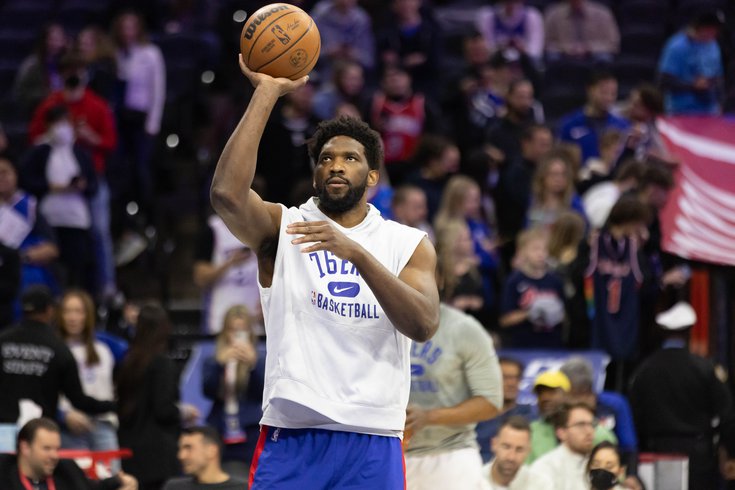 Joel Embiid warms up before the start of the Sixers' game against the Raptors at the Wells Fargo Center on March 20.

Sixers center Joel Embiid cleared concussion protocol and participated in the team's shootaround on Friday morning, and he has been upgraded to doubtful for Game 3 with a facial fracture and right thumb sprain, as of Friday afternoon, the team said. That has the chance to change between the time of this writing and Friday's 7 p.m. tipoff.

Getting through the concussion protocol has been viewed as a significant barrier for Embiid to clear on the path to being cleared to play, with various reports coming in throughout the week about concussion-like symptoms suffered by Embiid. Turner's Chris Haynes reported during the Game 2 broadcast, for example, that Embiid had been unable to use his cell phone without the brightness of the screen irritating him, and Doc Rivers noted Wednesday that he was finally able to have a FaceTime conversation with Embiid while the team was on the road.

The barrier to entry at this point is the orbital fracture on the right side of Embiid's face that he would have to play through in order to appear in Friday's Game 3. It was concluded that surgery was not necessary at this time when Embiid underwent evaluation for the injury last week, but Embiid will have to wear a protective mask in order to play, and his comfort playing with such a mask looms large in the fight to get on the floor.

A source told PhillyVoice that his availability will be dependent on how Embiid feels the rest of Friday, in addition to how his pregame routine goes prior to Game 3.

For those who remember the last time Embiid played with a protective mask, the big man was less than happy about the situation then after undergoing surgery to address the issue. Embiid ":forgot" the mask on the sideline at least once during their 2018 series against the Miami Heat, and Embiid frequently lifted the mask up to see better at the free-throw line. Embiid also dramatically ripped the mask off late in Game 5 against the Boston Celtics in Round 2 ultimately missing a potential game-tying shot at the rim moments later.

(Editorializing here — that Game 5 in Boston was one of the early moments where I first thought Embiid had a chance at greatness. There was a stretch during the middle portion of that game where Embiid just flat-out dominated on both ends, and you had the feeling that with more experience and better injury luck, he might rise up the ranks of the league one day.)

If Embiid is somehow able to give it a go, it has a chance to dramatically shift the series, even with Embiid in compromised form. DeAndre Jordan has started at center for the first two games of Sixers-Heat, and Philadelphia's splits with Jordan on the floor have been historically bad. With Jordan on the floor, the Sixers have been outscored by 54.2 points per 100 possessions and are giving up 149.2 points per 100 possessions. Even if Embiid is not able to be the dominant two-way anchor he has been throughout this season, his presence on the floor will shift their backups into more fitting roles, and he will take pressure off of everyone else around him.

Half of the battle, the Sixers believe, will come down to simply making the open shots that they're already getting without Embiid on the floor.

"I would rather not be down 0-2, but should I feel bad? I mean, we lost two games, but you watch the film last night, we played hard, and guys competed," Doc Rivers said Thursday. "We got great shots...I believe in the guys that we play on the floor that we can make them over the long haul. I thought Game 2 we got great shots, didn't like them as much, but Game 2, we had a ton of open shots, ton of open threes. The game, when you look at it, came down to the three-point line."

"They're doing a good job of just putting two on the ball and trying to deny me basically the entire court," James Harden added Wednesday. "So it was giving our guys more space to be aggressive if they're going to deny me wherever I am on the floor. When I got opportunities to attack and be aggressive, and that floor has opened up a little bit, then I can go. Give them credit, but I feel like if we made a little bit [more] shots, and I keep saying that, but it opens the floor up a little bit more. You got to respect our shooters, now our gaps is a little bit more open."

The Sixers have tried to keep their focus on what is within their control with Embiid stuck on the sidelines, Tobias Harris joking after Game 2 that he was not thinking about Embiid while trying to win a tough game on the road against a good Miami team.

"I'm not in the middle of the game thinking if Joel is out there. I'm for sure hopeful if he comes back. I love Joel, but I do not think about Joel every single moment of my life," Harris said with a smile. "But we are all hopeful he comes back and can play, and we want him to be healthy because we know how good we are with him."

It should be said that this is yet another example of Embiid's sense of pride to play in every game possible after being dinged for his checkered injury history in the public square. In the hours following separate incidents leading to his thumb injury and the orbital fracture/concussion that have him in doubt, there was fear on both occasions that Embiid's season was done. But Embiid has privately insisted he will do whatever it takes to get back on the floor and play for a team that he believes has an earnest shot to contend with him on the floor.