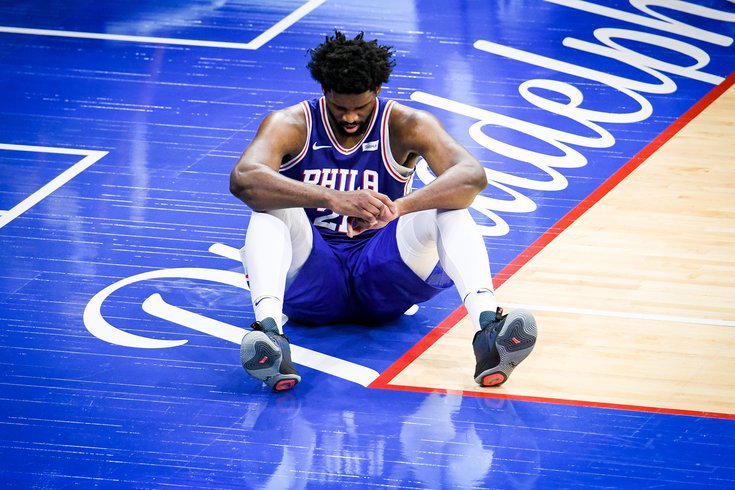 Sad Joel Embiid is a heartbreaking sight. In one gamer's experience, a Sixers Finals appearance went up in flames in 'NBA 2K21.'

Video games are only reflective of reality up to a point, even if they're advancing closer and closer each year. It's part of their appeal that they offer larger-than-life experiences that we can seamlessly enter and exit as we please.

But for Philadelphia 76ers fans, virtual heartbreak is a little too close for comfort.

One "NBA 2K21" player played a full season with the Sixers, clawed through the playoffs and reached the NBA Finals against the Utah Jazz. So far, so good. It's a plausible scenario.

In this bizarro world, however, Ben Simmons has been traded to the Jazz and is facing his former team in Game 7 of the Finals at the Wells Fargo Center.

With less than 10 seconds left on the clock and the Sixers trailing by one, Joel Embiid breaks through a horrible defensive scheme and takes it straight to the cup to put the Sixers on top with seconds left. The Jazz, with no timeouts, are forced to inbound from under their own basket.

Championship, right? Except, well, you see ...

This just happened to me in game 7 of the NBA Finals with the Sixers............. pic.twitter.com/XjVmcwwxSd

The "NBA 2K21" computer screwed this man in an unfathomable way. From another galaxy, Jordan Clarkson sinks a three-pointer and the Jazz win it all. Ben Simmons jumps for joy. Joe Ingles, of all people, crumples to the hardwood in a well of victorious emotion.

Imagine playing through an entire virtual NBA season, making it to the Finals, going ahead on a fluke defensive lapse that seems like a gift, only to lose on a desperation heave.

This makes Kawhi Leonard's quadruple doink look tame by comparison. The game's camera didn't show Embiid after this miracle shot. He probably drowned in tears and was floating down the locker room tunnel.

Whatever the rest of the NBA season has in store for the Sixers, please do not let it be this.