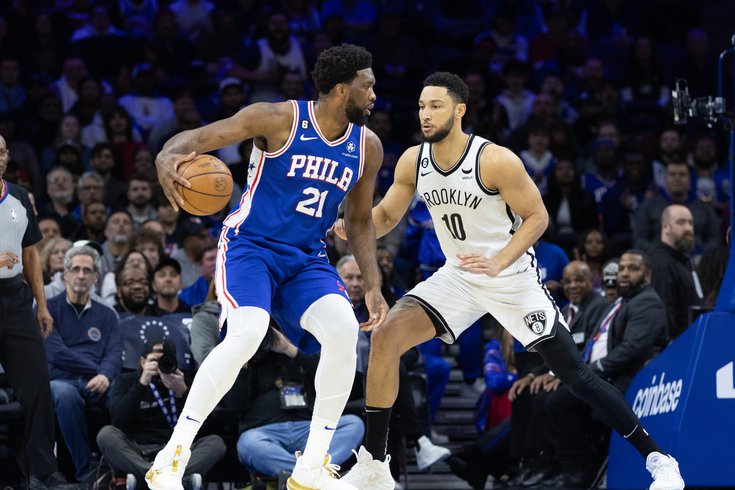 The Sixers didn't play a lick of defense but it didn't end up mattering, with Philadelphia squeaking out a 137-133 win over the Nets on Wednesday night.

• Nic Claxton has been one of the league's best, most versatile defenders over the last few months, holding up on switches across all sorts of matchups for Brooklyn. He is almost undoubtedly the biggest reason they have turned around on that end of the floor, and he made a number of highlight plays on Wednesday night.

But sometimes, maybe even most of the time, great offense is going to beat great defense. And Tyrese Maxey had a whole lot of great offense to offer in the first half, unleashing a barrage of stepback jumpers that the Nets had no chance to stop.

Philadelphia's offense wasn't super complicated when Maxey was running the show for the second unit. It's fair to ask whether they should have been hunting switches against a guy who excels on switches, but Maxey had absolutely no fear of Claxton, seeking him out on a number of possessions and then dropping beautiful stepback jumpers in his grill.

He was fortunate on at least one of those, making a shot that looked like it had no chance on release and got one of the friendliest bounces I can remember since [redacted shot in Toronto]:

While Rivers has denied that Maxey would need to be encouraged to hunt his own shot at any time, moving him into this sixth-man role has given him plenty of opportunities to lead the offense outright, and it does seem to have goaded him into the most aggressive possible version of himself. He has carte blanche when he's on the floor right now, launching turnaround midrange shots and floaters and those devastating threes, calling his own number whenever he wants.

• I didn't think James Harden had an especially good game, and if there's a culprit for the offense coming to a screeching halt at times, you probably have to look in his direction. But, man, did he hit some massive shots in this game, baling the Sixers out of some absolutely terrible offense late.

Joel Embiid was in the midst of a brutal fourth quarter, mostly just standing around in the final minutes while the Nets sat back in a zone. Left with nothing else to do but call his own number, Harden did so on a couple of occasions, cashing out for six huge points with the game hanging in the balance:

And that right there is the difference between this guy running your team and the guy he was traded for. When the chips are down, sometimes he can just shoot you out of trouble.

Rather than relying on their struggling big man and best player, Philadelphia's offense ran through Harden late. Advantage Sixers on most of those possessions, and certainly on the ones they absolutely had to have:

(An additional footnote: Harden continues to shoot catch-and-shoot jumpers when they swing his way. Big deal in the short and long term.)

• De'Anthony Melton has struggled to find the range recently, and his time as starter might have been short-lived if the team wasn't rolling. But this was a great return to form for him, with Melton matching Embiid at halftime and truthfully turning in a much more effective first half on offense.

You can't do any better than perfect — Melton finished the first half 5/5 from the field and 3/3 from deep, hitting an early corner three on a transition play where the Nets simply lost him. Seeing one go down was all it took for Melton to settle into a groove, No. 8 helping to carry their offense early on while the stars settled in.

I guess I'm burying the lede here — Melton made multiple layups! Melton cashing in opportunities in the paint has been one of the funnier/most infuriating subplots of the season, and Melton cashing some points in the paint helped tie everything together for their starting and closing groups.

While Melton certainly didn't stop Kyrie Irving, who hit some absolutely ridiculous shots as always, he did as good of a job bothering him as was possible. Melton blocked multiple Irving jumpers, weaponizing his length and athleticism to catch Irving at the peak of his attempt. And Melton's offensive rebound with just under two minutes left may have been the game's most important play — instead of the Nets going down the floor with the chance to take the lead, Maxey canned a huge three on the right wing, keeping Philadelphia out in front by a hair.

• Now this was the version of P.J. Tucker I think many people were hoping for when they signed him last summer. Brooklyn loaded up on Joel Embiid, sending multiple bodies into his path to stop him from getting to the rim, and Tucker made a difference as a pest on the glass, keeping rebound opportunities alive or digging them out himself within a sea of arms. Grit and toughness have been in short supply for Tucker throughout this season, the veteran forward unable to dial it up too often, but it all came roaring back at once.

It's probably an indictment of the Nets that Tucker was as influential as he was in this game, because Tucker managing to score six points in a single half without making a three feels like some sort of miracle. But Tucker deserves credit for being in the right places at the right times, sliding along the baseline and mixing it up to keep the Nets on their toes.

• Georges Niang didn't spend a single minute on the floor with Ben Simmons and he might dislike him as much as anybody on the roster. Any chance he got, he threw his body into Simmons and let him hear about it, goading Simmons into both a travel and a technical foul in the early stages of the fourth quarter.

The edge Niang plays with turns pedestrian regular season games into harder-fought battles, and it turns a game like this into an even more animated affair. Love it.

• No reason to pretend otherwise — this was maybe a C-level game from Embiid at best. Decent counting stats, some great highlights, one of the biggest DX crotch chops we've ever seen, but a whole lot of bad offense and iffy defense from the big man.

If anything, Joel Embiid was a little too fired up for this game. The Sixers tried to take advantage of Embiid vs. smaller players — including Ben Simmons — a little too often early in the game. We didn't see a ton of pick-and-rolls involving the Harden/Embiid combo early in this game, with the Sixers' offense leaning a bit too hard on isolations, and that trend didn't break over time.

There were at least some decent reasons for that trend on the Harden side of the equation, with Harden getting to attack some favorable matchups in isolation with Embiid spacing the floor for him. One particularly good stretch on that front saw Harden dressing down T.J. Warren in isolation, Embiid spaced out to the left wing, with the Sixers earning free throws, open threes, or a bucket nearly every time.

It was less clear that they had a coherent plan for Embiid, trying to use him to sledgehammer through Brooklyn's interior. Give Claxton credit for making Embiid work at times, certainly, but there were plenty of unforced errors from Embiid as he tried to dribble through traffic or force shots up that weren't really there. I didn't think the defensive end was much better but hold that thought.

• Whatever offensive issues the Sixers had in this game were about process rather than result — they had no trouble putting points on the board against the Nets. You could not same the say on the defensive end, where they made silly mistakes and gave Brooklyn life in a game that probably should have been put away in the third quarter.

I understand that Simmons and Claxton are complete non-entities from deep, and you can absolutely get away with sagging off them and/or helping away from them to double more dangerous players. But the Sixers dialed that up to a comical degree and often got burned for it, with quick passing opening up their defense far too easily.

That was most evident with Claxton himself. It's tough to ignore Irving when he's capable of hitting high-difficulty shots from basically any angle, but the Sixers way overcorrected in their efforts to stop him. Many of those mistakes were made by Embiid, flying in to help on Irving before he would whiz a pass around him to the man he had just left. Claxton turned in an ultra-efficient night and rarely had to work for a quality look.

It wasn't pretty outside of Embiid, mind you, but I was most disappointed with his play and his decisionmaking. By the end of the game, I did start to wonder how much the foot pain was impacting him, with Embiid wincing and grimacing after coming down from a few of his jumps.

• There was a decent contingent of Nets fans in the upper level for this game, and they probably should have workshopped a few more chants before making their way to Philly. Chanting the name of a player (e.g. "Bennnn Simmons!" or "Ky-rie Ir-ving!") just gave the home fans an opportunity to yell "SUCKS!" once Brooklyn's fans relented.

On the other hand, it was fun to at least have some hostile fans in attendance. It tends to be more common for Knicks games, but given the personal rivalries in this matchup, it adds a little extra juice.

• Brother, the officiating stunk in the first quarter of this game. It was not the easiest environment to control, but set aside the techs and the desire to keep tempers from flaring for a moment. There were some brutal missed calls and weird rulings in both directions, and it didn't make for an especially watchable product.

Two bad ones that immediately jumped out: Matisse Thybulle getting called for a foul on a clean defensive contest/block, and Embiid getting a shooting foul on a play where he had barely caught the ball before Ben Simmons swiped down at his arm.

• Not even Ben Simmons' biggest skeptic/hater could have imagined him being as useless and afraid on offense as he was in the first half of this game. Simmons barely hit the rim on a two-footer when he saw Embiid swooping in for a potential block, and he spent most of the night afraid to attempt a shot, turning his back to the basket and passing backward as we saw so many times over the years.

I am glad I don't need to have people in my social media mentions justifying this BS every day. The objective of the game is to put the ball in the hoop. When he made an effort to do so in the second half, it didn't end up looking that difficult. What a shocker.

• Montrezl Harrell running full speed out at Simmons at the end of the quarter instead of simply staying by the rim and waiting for him is one of the dumbest, "read the scouting report, bro" fouls of the season. Gifted Simmons a trip to the line at the least, and Simmons scored through contact because of Harrell's mistake.

• An absolutely disgusting amount of zone played by the Nets in this game. Even Jim Boeheim wouldn't condone this.