At the Philadelphia Sports Writers Association banquet, the Phillies' manager recalled what an opposing coach told him about the Bank in October 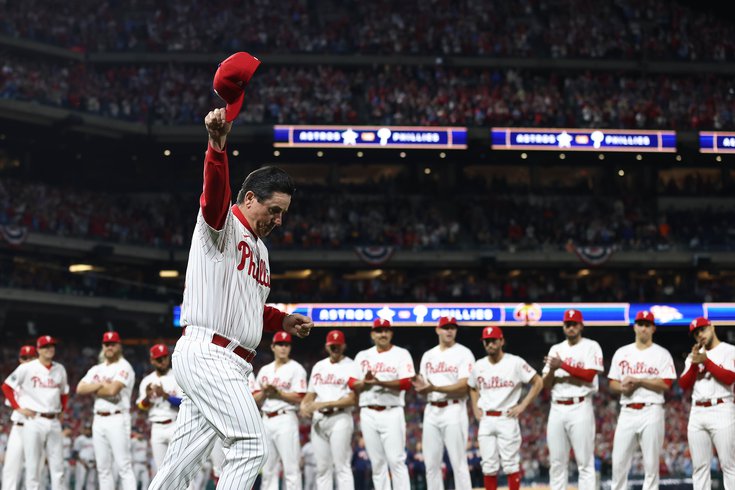 Phillies manager Rob Thomson salutes the crowd after being introduced ahead of Game 3 of the World Series at Citizens Bank Park back on November 1, 2022.

There was no better place to be in October than Citizens Bank Park and the entire baseball world saw that during the Phillies' incredible run to the NL Pennant.

But for the Braves, Padres, and even the Astros in the World Series, South Philly for them wasn't nearly as good of a time.

On Monday night at the Philadelphia Sports Writers Association banquet in Cherry Hill, Phillies manager Rob Thomson, in accepting his club's award as 2022's Team of the Year, told the crowd a story about what the Bank was like from the other side.

"After everything was over, the World Series was done, I got a phone call from a friend of mine who was coaching with another team that we had played in the playoffs.

We were just talking about the games that we played and all that – all the things that went on – and I said 'What did you think about the atmosphere in the Bank?'

He said 'Playing in your stadium with the way you guys played and the electricity of the fans...' He said it was 'four hours of HELL.'

At tonight’s Philadelphia Sports Writers Association dinner, Rob Thomson said a coach from one of the teams the Phillies played in the playoffs told him playing at Citizens Bank Park was “four hours of hell.” pic.twitter.com/E6lASv59eR

Man, print that on a t-shirt for this season.

No doubt that Citizens Bank Park was electric throughout the postseason, so much so that it factored into why star shortstop Trea Turner and reliever Matt Strahm wanted to sign here.

Pitchers and catchers will report down to Clearwater on February 16 for the start of the spring training, with the Phillies aiming to not only get back to October but to get all the way across the finish line to a third-ever World Series title, that way the party doesn't have to end.