Red October made the Phillies a destination again

The baseball world finally saw everything Philly could be in the postseason again. Trea Turner and Matt Strahm wanted in. 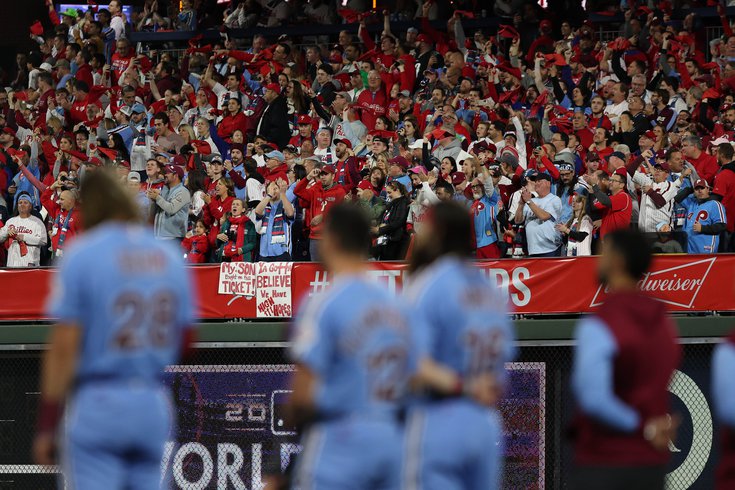 Phillies fans wave their rally towels ahead of Game 5 of the World Series at Citizens Bank Park.

The towels waving, the crowd roaring, every player on their feet in the dugout alongside 46,000 strong.

For the first time in a long, long time, the baseball world saw everything Philly could be in the postseason.

Matt Strahm saw it too.

They could feel the energy in the ballpark just from watching games on TV. It was infectious, and when both were officially introduced as Phillies – Turner on Thursday, Strahm on Friday – there was a common theme among both for why they chose Philadelphia.

"What Philly did last year and how magical that place seemed on TV, I can only imagine what it's like in person," Strahm said.

"It looked, not only fun for the players, but for the fans," Turner said. "There seemed to be kind of a family aspect. They were in it together, and I think that was more what jumped out to me was how much fun the players were having and the fans together than anything."

The Phillies are a destination again.

In part because of a miracle run to the World Series and being maybe a couple pieces shy of going all the way back again to win it all, in part because owner John Middleton and team president Dave Dombrowski have no hesitations in spending the big money to win it all, and in no small part to be on a club and in a city that will throw the celebration of a lifetime if they do in fact win it all.

Playoff baseball in Philadelphia, it's back and with nothing else like it. The Phillies want to keep it that way.

Turner, Strahm, and Taijuan Walker – who's still awaiting his official introduction after agreeing to a four-year, $72 million contract – were all brought in for different reasons, but all with the same goal of getting back to win the World Series.

Walker, a 30-year old righthander, is coming in to round out a rotation of Aaron Nola, Zack Wheeler, and Ranger Suárez to provide depth that will hopefully allow each starter to push deeper into games as the season wears on.

Strahm, a 31-year old lefthander who carved out a steady role for himself as a reliever in Boston last season, is here to make for a deeper bullpen and get his new team whatever outs they need the second his number is called.

"Whenever they need outs, I'll get outs," Strahm said when asked of what his role might be. "I don't care about stats. I don't look at my numbers. It's winning, dude. I want to win. So however they see me helping them win, that's what I want to do."

And Turner, the 29-year old All-Star and Silver Slugger, he's here to be Phillies' $300 million, all-purpose shortstop for the next 11 years. A dynamic bat at, presumably, the top of the order, an athletic glove in the field, and an experienced, championship-winning presence in the clubhouse who can hopefully be the last major piece to get them to the end.

"You can see it. It's hard to fake that," Turner said of the Phils' makeup and camaraderie. "You can see guys in the dugout and on TV. Obviously, you talk to these guys, and [hitting coach Kevin Long], [Kyle Schwarber], [Bryce Harper], they all said how good the clubhouse is and how good the guys are, but I think you can see it from afar playing against them. You could see it on TV. It's very noticeable and it's special when it happens."

And he wants to keep the good times going. So does Strahm.

The energy from last October was infectious. It made the Phillies a destination again, and the next stop for all of it is clear.

"You can't argue with that team," Strahm said. "I'm at the point in my career where winning's everything. I did the rebuild thing in San Diego... I want to be on a team that's ready to compete. You can't argue with what the Phillies have done. I'm just excited to join them and be a part of it."