Everything came up Philly for Trea Turner

"We pictured ourselves here," Turner said at his introduction Thursday. "I pictured myself in this uniform." 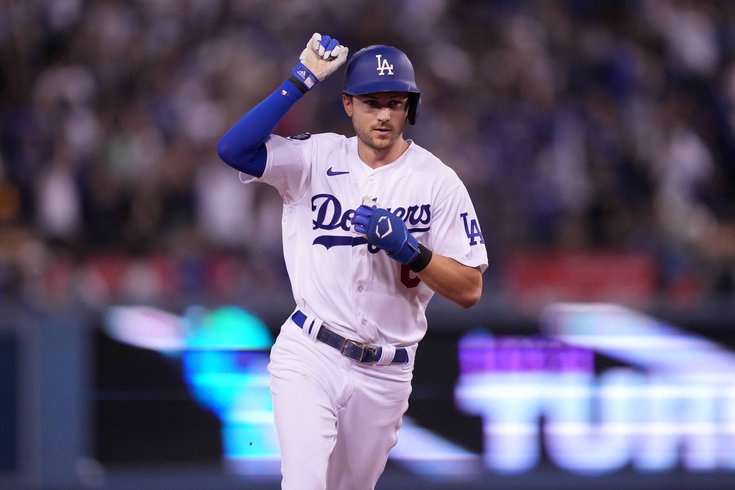 Trea Turner should expect to round the bases a lot in Philadelphia.

Once the Dodgers were eliminated and he had the chance to watch the remaining postseason games at home, Trea Turner saw the Phillies' miracle run and just how crazy Citizens Bank Park could be in October.

"They were playing really good baseball at the end of the season," he said. "It looked, not only fun for the players, but for the fans. There seemed to be kind of a family aspect. They were in it together, and I think that was more what jumped out to me was how much fun the players were having and the fans together than anything.

"You could hear it through your TV how loud the stadium was. I've played here many, many times but I don't know if I've ever seen it like that."

He wanted in, and over time, once free agency began and negotiations with interested clubs started, everything just kept coming up Philly.

From a baseball standpoint, where he had the chance to join a tight clubhouse and be one of the final pieces to put the team over the edge for not just one championship, but multiple. And from a family standpoint, where he and his wife Kristen, with their son Beckham, envisioned a city where they could settle down long-term.

Philadelphia was always the place, even with reported higher offers elsewhere.

"We pictured ourselves here," Turner said. "I pictured myself in this uniform. She pictured living here and having family come and visit. We pictured playing with [Bryce Harper] and [Kyle Schwarber] and a lot of those guys on the team now, [hitting coach Kevin Long]. It just seemed like a lot of things added up and pointed us in this direction.

"This place is fun to play, I watched a lot of the playoff games and this place was rocking so just a lot of things pointing in this direction."

A direction that, late Thursday afternoon, after months of rumors and speculation, finally brought the star shortstop to South Philadelphia, where he put on his No. 7 jersey for the very first time.

He's a Philadelphia Phillie now, officially, and will be for the next 11 years as the franchise aims to usher in its next golden era with maybe its most talented lineup ever assembled.

The immediate mission now, after reaching the World Series but falling just short, is to get back there and win it all.

Turner's been there before in 2019 with the Nationals. He knows what it takes. So not only will his rare mix of contact, power, and speed at the plate, along with his glove in the field, be invaluable to the lineup, so will his experience to the clubhouse.

"It's hard to win at that time of year because you're playing such good competition, right?" The 29-year-old said. "But I think the good teams I've been on, we've loved each other, we've loved hanging out, we've loved doing things together, and those are the kind of things I talked about earlier, that's what this ball club had.

"Hopefully from a baseball standpoint, I can add to it, I would hope. But just from a clubhouse standpoint, I think I'll fit in great here and continue that chemistry that these guys had last year. I think that's really important. That's how you make deep runs, that's how you, when you're not playing well in June, July, that's how you get through it because you want to be together."

That is heavily what got the Phillies through last year after all, and the hope is that the magic will still be there to carry them all the way to the end in 2023.

There were questions about the finer details, however. Turner was asked about the leadoff spot and joked that he wasn't sure he wanted to take it away from Schwarber.

"He stole a lot of bases last year, he's kind of coming around there, so I don't know if I want to kick him out of there," he quipped.

Though ultimately, he said he didn't have a preference, just that there's consistency in who's in front of and behind him in the order.

On Bryson Stott, who's expected to move to second base now to make room: Turner said they did exchange numbers, but haven't talked too much yet.

On the city: he's not too familiar yet, but him and his wife are exploring and piecing things together (also taking food recommendations).

And on the prospect of honoring an 11-year deal:

"I bet on myself all the time," he said. "I'm gonna compete for as long as I possibly can at the highest level I can. I'll just bet on myself every step of the way."

"I don't know what it's gonna look like. I don't plan too far ahead. I try to focus on the day, and I think focusing on what's right in front of you will help in that long run. That's kind of how I view it."