It sure seems like Bryson Stott is moving to second base

No one could, or would, outright say it, but Phillies brass talked about the idea of Stott at second a few times on Wednesday 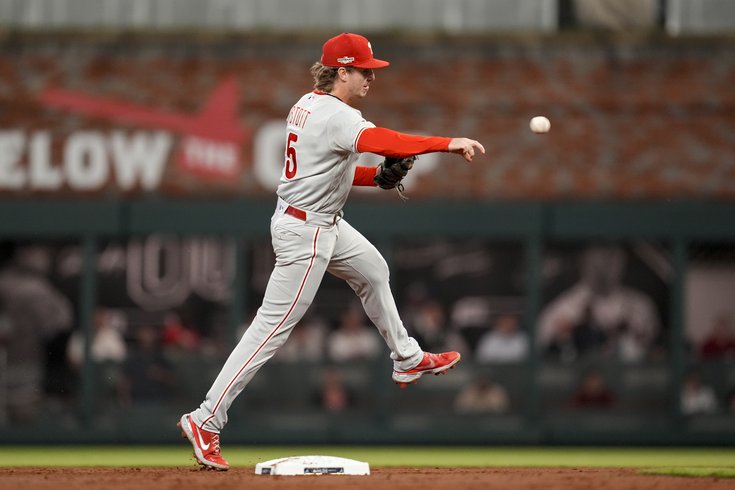 Phillies shortstop (soon to be second baseman?) Bryson Stott makes a throw to first during the NLDS against the Braves.

Rob Thomson asked Bryson Stott at the end of the season what his preference was.

"I said 'What do you prefer, shortstop or second base?'" The Phillies' manager recollected.

"He said 'big leagues.' He said 'It doesn't matter to me.' So he's prepared to do anything."

Thomson, team president Dave Dombrowski, and general manager Sam Fuld all met with the media on Wednesday to touch on a number of topics as the club heads into the winter – The status of Bryce Harper's elbow (he's getting surgery), trade and free agency plans, the health of the starting rotation after a longer than normal season, the possibility of one of Mick Abel, Andrew Painter, or Griff McGarry cracking the Opening Day roster, etc.

And although no one could, or would, outright say it, it sure does sound like Stott, who settled in as an everyday major leaguer at short this season, is gearing up for a move to second in 2023.

Dombrowski was asked about the rule changes coming for the shift next season and how they might affect the Phillies. When it came to the fielding part of the answer, he mentioned Stott's range at second.

"You can't cover a guy that doesn't have as much range as another player would," Dombrowski was explaining. "But I still think you can cover for some of that still by shifting, so it comes into play, but I'd have to say to a point...We had [Jean Segura], so we had a benefit in that regard and Stott has good range at second base, so we really don't have the stationary-type second baseman that some clubs may have more of because they knew that they could shift themselves out of that. We really haven't had those types of guys at second."

Rumors have been going around since the middle of the summer, before then even, that the Phillies were going to be in the running for one of the big-name shortstops on the free-agent market this winter, with Trea Turner and Xander Bogaerts – after he opted out of his contract with the Red Sox – being the two names most commonly linked.

Turner, 29 and coming off a Silver Slugger-winning campaign with the Dodgers, would bring speed, contact, and a bit of pop to the plate, not to mention a reliable glove in the field. Plus, he has history with Bryce Harper from their years as teammates in Washington, a connection strong enough to leave many at the GM meetings last week believing that the Phillies are Turner's "top suitor."

Bogaerts, 30, would also bring steady contact at the plate as a five-time Silver Slugger (this season included) and four-time All-Star, along with a steady enough glove. He's familiar with Dombrowski as well, with both having been a part of Boston's World Series run in 2018.

Both players would present an enormous boost to the Phillies' roster, but both are also pure shortstops, so any rumor of landing them in a potential signing always came with the caveat of a shift to second base for Stott.

He can do it though, and better yet, based on what Thomson said Wednesday, he'd be willing to.

The 25-year old and former top prospect appeared in 127 games this past season and started 118 of them on the Phillies' way to the NL pennant. He played the majority of those games at short but did start 41 of them at second, and was solid when he did, posting no errors, a fielding percentage of 1.000, and a run saved above average.

The Phillies declined Segura's club option for 2023 to create an opening in the middle infield, presumably to gear up for a big-money pursuit of Turner, Bogaerts, or possibly other options in Carlos Correa or Dansby Swanson.

Dombrowski wouldn't tip his hand though.

The door still could be open for Segura to return under the right circumstances and Edmundo Sosa is a more than capable infielder at any position should any potential offseason plans go awry.

But he did state two things for sure: 1) If the Phillies do sign a middle infielder, that'll be the only one. 2) Stott's an everyday player now. He's going to play.

It's more a matter of where now than anything, but it sure does seem like it's going to be second after Wednesday.

"We think Stott's an everyday player, so if we sign one, it precludes everything else at this point."