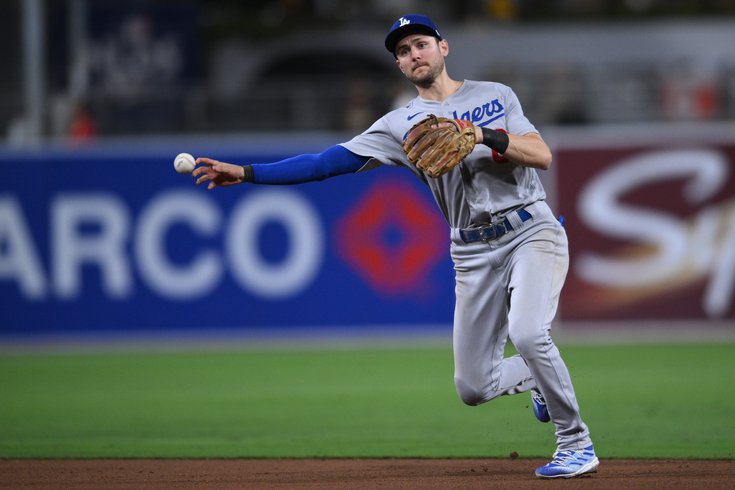 Trea Turner is at the top of the Phillies' wish list.

The Phillies need to put their foot on the pedal.

After a run to the World Series that shocked the entire sports world, it is clear that the Phillies are very close to being a top contender in 2023 — perhaps just one or two pieces away.

Those pieces will need to fit seamlessly around the core already in place. The team has a core that more or less has the outfield set in stone and an infield with movable pieces that are sort of in flux.

In some capacity, Alec Bohm (third base, possibly first), Bryson Stott (second, third or short), and Rhys Hoskins (first base if he is not traded) are all likely to be back. But with Jean Segura off the books, there is an open role and there are some extremely big — and expensive — names out there.

"We're going to be open-minded with the middle infield," Phillies president Dave Dombrowski said Wednesday when asked about the four stud shortstops currently available on the open market. The front office guru went on to say he likes what the Phillies have in Edmundo Sosa and would consider bringing back Segura, should they miss out on some of the bigger names out there.

It's doubtful John Middleton's taste of success will slow down his interest in spending beyond the luxury tax for the second straight season. So who might wind up being the splashy blockbuster upgrade the Phillies are in clear need of?

Here's a look at 10 of the most intriguing options:

Turner seems to be the top and most desirable target for the Phillies — and with the recruiting skills of Bryce Harper (who was Turner's former teammate in Washington), there is a very real possibility Turner is Philadelphia's next leadoff hitter.

With a Turner signing, the Phillies infield would likely require Bryson Stott to move to second (where he has 47 career starts). Turner has a little of everything, from power to speed to defense to hitting for average. The 29-year-old was an All-Star for the second time in 2022 and won his first Silver Slugger award this season. He'll be pricy but is also exactly what the Phillies lineup is currently missing.

Correa shocked many when he left Houston for a one-year stint in Minnesota amid last spring's chaotic free agency period (following the lockout). He's on the market again and is arguably better than Turner, and the top prize among position players not named Aaron Judge this winter.

He's a slick fielder, a former Gold Glove winner, and has a career per 162-game average of 28 homers and 101 RBI. He also brings with him a lot of playoff experience and the kind of swagger that would fit in nicely with Philly's clubhouse.

If the Phillies want to add an all-around infielder who has a resume better than anyone on the current roster, Bogaerts is the way to go. He has two championship rings, five Silver Slugger awards, and has been an All-Star four times.

Bogaerts isn't the same kind of slugger Correa and Turner are, but the Phillies have plenty of power. They need a hitter who can reliably get on base and play mistake-free in the field, and that's who they would get in the former Red Sox star who has ties to Dombrowski.

Swanson has basically the same skill set as Bogaerts, is a little younger, and has a less impressive body of work — but his accomplishments do include a World Series ring and Gold Glove award. For a cheaper sticker price, the Phillies would be adding a borderline All-Star and would also simultaneously be taking a key player away from a big rival in Atlanta.

Let's shift from the shortstops to some other positions. Rhys Hoskins, as we noted last week, is an interesting player who the Phillies may be looking to upgrade and move on from. It's possible that the Phils could look at improving the lineup there, while also shoring up a defensive weakness. Abreu is a year removed from an AL MVP award and is one of the best hitters in baseball. The Phillies would still need to fill a hole in the infield but could elect to go with someone cheaper at second base (like bringing back Segura or going with Sosa).

Bell would be a similar acquisition but is younger than Abreu. Adding Bell would bring some power and another DH-type player who could be flexible within a batting order and lineup. He was a Silver Slugger at first base in 2022 and was with the Padres during the NLCS.

You know what you get with Segura. A flawed but solid infielder who can play multiple positions, a solid hitter for average (who had a chance at being an All-Star this season in Philly before getting injured), and a player who has a little clutch to him.

While the Phillies and fans would prefer to bring in a superstar upgrade, there's no reason Segura wouldn't want to return at a reasonable number should he fail to get a better deal elsewhere in free agency.

Entering his 14th season as a pro, Andrus brings a professional track record with him of missing very few games and being reliable and consistent during his long career. He hit .271 with nine homers down the stretch with the White Sox after a summer trade moved him away from the Athletics. He is an older option but could be a cheap signing on a short deal if the Phillies elect to go that direction.

Drury was with the Padres this postseason and was not a huge factor in the NLCS, but he had a very good season in 2022 and has the profile of a player who might be a cheaper upgrade option should the Phillies use their cash on starting pitching, or strike out on the top four shortstops. Drury is a good all-around hitter with some pop who can play multiple positions.

Turner is the only third baseman on our list, and he is also the oldest player we've included, but he is a playoff veteran who can handle the bat and the glove. His acquisition would likely move Bohm to first and see Hoskins move on from the organization unless he assumes a bench/DH-type role.