Stay or go: Do the Phillies need to upgrade their bench for 2023? 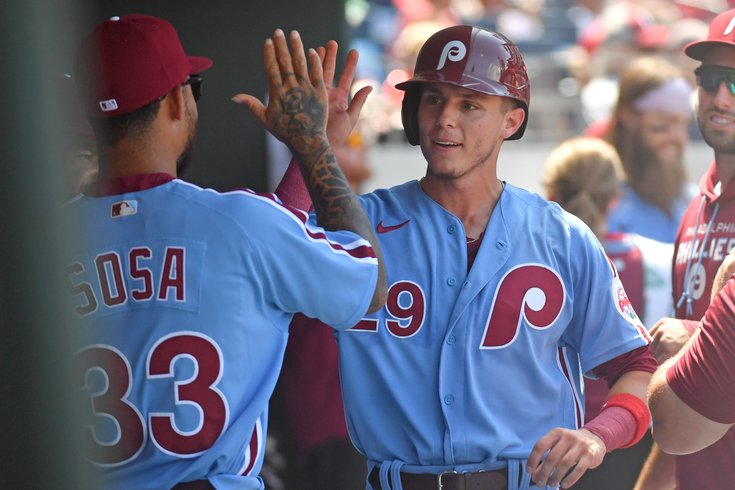 Will the Phillies bring back their bench players for 2023?

It would be hard to argue that depth isn't an incredibly important part of fielding a competitive baseball team.

Over the grueling span of 162 games, plus the postseason, injuries are unavoidable. And if you are Phillies manager Rob Thomson, you'd like to be able to platoon pitchers and hitters based on matchups (yes... we know...).

With the MLB offseason underway, the Phillies are likely to make upgrades wherever they can. We've already taken a look at two areas they'll no doubt address — the infield and their starting pitching staff. However, their non-starting position players are also very much in flux as we head into next season.

The Phillies carried four bench players with them to the World Series this year, electing to go with 13 pitchers instead (with the universal DH, this decision made a lot of sense).

We'll take a look at those four, plus Darick Hall, who remains under team control this season and was a key contributor to the team in 2022. There were, in total, 28 different hitters to get an at-bat for the club last season — so we are going to skip over the Dalton Guthrie and Yairo Munoz-type players who were very deep depth pieces this summer.

The 26-year-old hit .315 in 25 games for the Phillies after a savvy trade with the Cardinals netted him in exchange for pitcher JoJo Romero. Sosa played a very clean utility role during his short stint with the Phillies, making just one error while playing shortstop, third base and the outfield. He appeared in 14 playoff games, often as a defensive replacement but didn't offer much offensively.

Sosa is relatively young and will be eligible for arbitration this offseason. The Phillies should have an interest in keeping him around, as he'll return with playoff experience and as a versatile defender. Depending on how much the Phillies do within free agency and on the trade market, they may decide to go with cheaper and familiar players to round out their bench.

Hall was a very memorable call-up for the Phillies this season. Amid injuries to their DH-type sluggers in Bryce Harper and Nick Castellanos, the Phils took a chance on the journeyman 26-year-old rookie and he wound up being just what the team needed. Smashing nine homers in his 41 games (a 36-home run pace) he actually hit two in a game in August and captured fans' imaginations during the dog days of the season.

It will be interesting to see if there is any place for Hall on the roster next season. They already have a ton of DH candidates, and if they bring Rhys Hoskins back there won't be a spot for him on the field defensively either. He was blocked from being on the postseason roster likely for those reasons. With remaining minor-league options he may be back in Triple-A.

It's often been noted that the Phillies are the team least in need of a good backup catcher, due to them having the NL's Gold Glove and Silver Slugging backstop who insists on playing in as many games as possible every year. Still, in Stubbs, they had a pretty good No. 2 when needed.

The former Astro filled in at catcher 32 times during the regular season. He was on the postseason roster but did not get a start. The Phillies have some prospects in the wings at catcher and there may be some in-house competition for him to retain his role, but it's hard to complain about a guy who can hit .264 and handle the pitching staff when called upon.

Maton is a homegrown utility man who can hit .250, slug the occasional homer and play every position. Literally. During the 2022 regular season, the 25-year-old played in the outfield, second base, third base, shortstop and even pitched.

Maton is sort of panning out how the Phillies hoped Scott Kingery would. He was on the playoff roster but only got one at-bat. He's under team control, will be cheap next season and will be in the mix in spring training. He has one minor league option remaining.

In 117 games this season, Vierling hit .246 and made no errors when playing in the outfield (he did have five starts at third base and made one fielding blunder there). Late in the season, he was usurped of his starting centerfield job when the Phillies traded for Brandon Marsh. He still platooned a bit, as a righty bat (Marsh is a lefty) and was on the field for 12 games during the playoff run — struggling with a .154 batting average.

The Phillies' outfield situation is going to be complicated next season. They will have Marsh, Castellanos, Kyle Schwarber and Harper — who will eventually be able to play in right field again — on the roster. The ideal scenario is one that allows the Phillies to use the DH in rotating fashion to get the sluggers above as many at-bats as possible.

It makes sense that they'll need a fifth outfielder, who bats right-handed, to be able to insert at center when needed with Marsh likely to start there most days. Vierling probably fits the bill, but it is possible they look to a veteran with more pop or with better defense as their last bench guy.