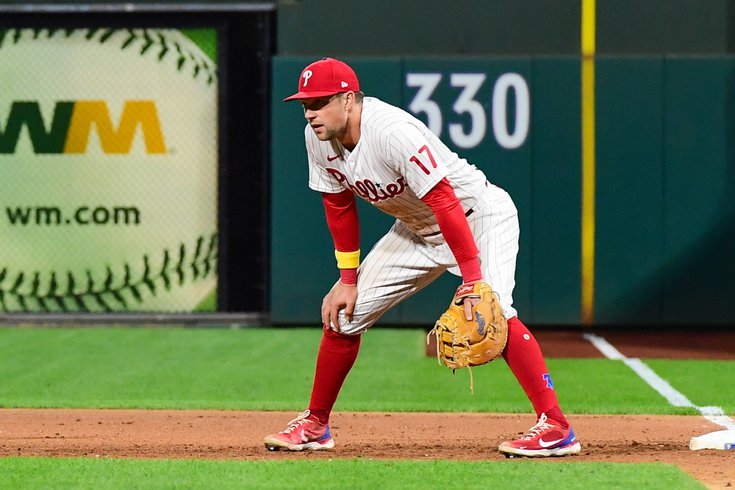 After struggling at first base defensively for much of 2022 and having a very inconsistent experience at the plate, the Phillies' homegrown first basemen delivered two of the most memorable and important home runs in franchise history this postseason. In the NLCS against the Padres, despite making some mistakes in the field he hit four homers and had seven RBI in the five-game series win.

However, in the other three postseason series, Hoskins hit .135 with two homers in 52 at-bats.

Hoskins is relatively expendable. He has one year left of arbitration control before free agency arrives for him in 2024. He will likely be owed somewhere in the $12 million range — a reasonable figure for a 30-home run hitter (with a modest .242 career batting average). But the Phillies can elect to move on — which is also unlikely. Moving him via trade is probably the most logical choice from an asset perspective.

The Phillies are going to need to find ways to improve their lineup heading into 2023 as they will have the expectations of defending National League champs to carry with them. There are not a ton of areas where the Phils can seek upgrades. The pitching staff is clearly going to be a spot of interest this offseason. The team also declined to retain Jean Segura at second base, opening up a spot for a superstar infielder like Trea Turner.

But first base is also a spot they can improve at.

According to Baseball Reference, the Phillies got 0.7 WAR from the first base position in 2022, the 12th-best mark of 30 MLB teams — the middle of the pack. Only second base (where they are upgrading over Segura), left field (where Nick Castellanos was playing) and center field (where Matt Vierling and Odúbel Herrera had the most plate appearances) were worse among Phillies position WAR rankings.

That certainly means the position can be improved upon.

The Phillies had the second most errors at first base in the majors, 13 of them behind only the Giants (12 of those were Hoskins' fault, the most of any first baseman). As such, the fielding percentage at first was the worst in MLB in 2022.

Are his 30 homers worth it all?

We mentioned the power, and Hoskins can bring it. He has averaged 36 homers per 162 games over his six-year career, with 98 RBI to boot. He also can be completely lights out for stints that really help a team with depth like the Phillies have.

Streaky players can vanish production-wise without as much consequence on a team built like the Phillies, and emerge in key spots to help fuel winning streaks. He's done just that a bunch over his career.

He also has excellent plate discipline, which is one of the reasons he's hit second a lot over his career. Hoskins saw the third most pitches of any hitter in all of baseball last season, drawing 4.3 of them per at-bat (behind Max Muncy and teammate Kyle Schwarber). He was also 17th in walks drawn in 2022 — and was first in that category a few seasons ago.

Having a player who can help to wear out the opposing pitcher while bringing impressive power to the plate does have value. The value also exists in the contract, which for at least one season will be cheap for what he brings to the table.

We mentioned his fielding metrics and those likely are the biggest strike against him staying with the team. But as we said, he also can disappear for weeks at a time, getting mired in slump after slump during a regular season.

He also strikes out — a lot. With patience at the place also come a lot of called third strikes. In 2022, Hoskins struck out 169 times, 10th in baseball. Schwarber, interestingly, led the entire league with 200 Ks. The Phillies seem to have a lot of true outcome-type players (home run, walk and strikeout). Is that a good thing?

The biggest knocks against him come when you compare him to the players who the Phillies could potentially replace him with. Many of them play different positions. We'll focus on straight-up first basemen for now.

Who would replace him?

Let's just assume for a moment that the Phillies keep Alec Bohm at third base, a spot at which he has struggled a bit during his young career but showed flashes of brilliance during the postseason. Here are the top free-agent options:

Rizzo is the top name at first base. Offensively, his batting average is actually a little below Hoskins' and he provides about the same amount of power (33 HR, 94 RBI per 162 games). However, if the Phillies want to be an all-around baseball team, Rizzo's defense is elite. He has four gold gloves and has been in the top 20 in MVP voting five times. He also has a ton of playoff experience. But the Phillies would likely pay for the privilege — Spotrac says he is worth $23 million, twice that of Hoskins.

Bell is a player Phils fans are familiar with — he was with the Nationals and also with the Padres during the NLCS. Bell offers a little less power, a little more average and a very slight defensive upgrade. He's about the same age and is expected to fetch $18 million or so on the open market.

This is an intriguing name, as he has proven he can provide what the Phillies lack. He is a career .292 hitter who hit .304 in 2022. He averages 31 homers and 110 RBI per 162 games. He is the 2020 AL MVP and has three silver sluggers on his mantle. He has an adequate .992 fielding percentage but his age could be what gets the Phillies a good deal — Spotrac says he is worth $9 million a season.

Mancini was with the Astros during the World Series but was pretty invisible with his bat. During the regular season, he often hits in the .260 range and has decent power. He is also a much better fielder than Hoskins. He too is expected to be in the high teens, around $18 million.

Belt is a career .265 hitter who has a .994 fielding percentage. Would the Phillies bring in an older player and hope to get a discount on him at first?

Perhaps the most likely and most appealing upgrade, however, would be for the Phillies to bring in the best infield player available and shuffle the infield around. Bohm could play first. Bryson Stott probably could also. Or perhaps a Trea Turner type could be open to moving positions.

The biggest question, really, is whether he has trade value to other teams, which is hard to argue he would not. Could the Phillies use him as a piece to land an ace pitcher? Could he yield them a stud infielder MVP candidate?