The veteran second baseman, after four years in Philadelphia and, finally, his first postseason appearance after 11 years in the majors, will go to free agency. 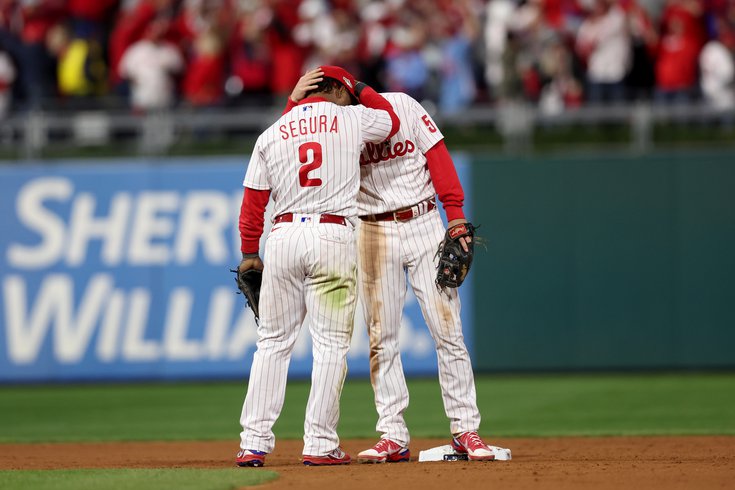 Jean Segura and Bryson Stott embrace after the Phillies win Game 3 of the NLCS against the San Diego Padres on October 21.

The Phillies made the decisions on their contract options official Monday night, including the one to decline Jean Segura's club option for 2023.

The fan-favorite second baseman, after four years in Philadelphia and, finally, his first postseason appearance after 11 years in the majors, will go to free agency.

This was always the likely course of action heading into the winter, not that it makes it an easier one, especially after the run the Phillies just had.

Segura was the best contact hitter in the lineup, one of the team's most fundamentally sound fielders, and won over fans and the clubhouse with his heart on his sleeve. For every big moment, he had a reaction to match.

During the ninth-inning rally in Game 1 of the Wild Card round against St. Louis, Segura, with the bases loaded, reached way low and outside of the strike zone to somehow slip a base hit past Cardinals second baseman Tommy Edman, leaping for joy on the way to first knowing that the tying run was going to score.

Then, in Game 3 of the NLCS against San Diego, he did it again, this time for a go-ahead two-run single that looped into the outfield, followed by a bat spike to rival Rhys Hoskins' from the round before. He also made two crucial diving plays at second that kept the Padres at bay, with a roar and a flex after each one.

During the regular season, Segura slashed .277/.336/.387 with 10 home runs and probably had a serious All-Star case building were it not for a broken finger suffered on May 31 while trying to bunt.

When he returned on August 4, he was huge in getting the Phillies to the finish line and finally snapping the 11-year postseason drought, then carried the clutch moments into October.

“I would love it,” Segura told The Philadelphia Inquirer's Alex Coffey earlier in October on coming back for another year. “I know that’s a tough decision for them, I understand. But I would love to finish my career here. [I’m happier] not just because we got to the postseason, but because of the guys, the city, the staff. I would love to finish here, but if not, we’ll see who wants me and who doesn’t want me.”

With big-name shortstops Trea Turner and Xander Bogaerts hitting the free-agent market, Phillies president Dave Dombrowski is expected to make a play for one of them with the possibility of a move to second base for budding star Bryson Stott.

The scenario leaves no room for the 32-year old Segura to return and he seemed to know it.

On Sunday, he posted a photo of the Philadelphia skyline to his Instagram alongside a "Thank You" message to the city. The writing was on the wall.

Segura was acquired by the Phillies in December 2018 in the trade that sent former top shortstop prospect J.P. Crawford to the Mariners.

He was brought in as part of a re-worked roster, set up for the eventual signing of Bryce Harper, that was built to finally bring the Phillies back to the postseason.

It took four years, but they finally made it, going further than anyone could've expected.