Stay or go: Should the Phillies overhaul their starting pitching staff? 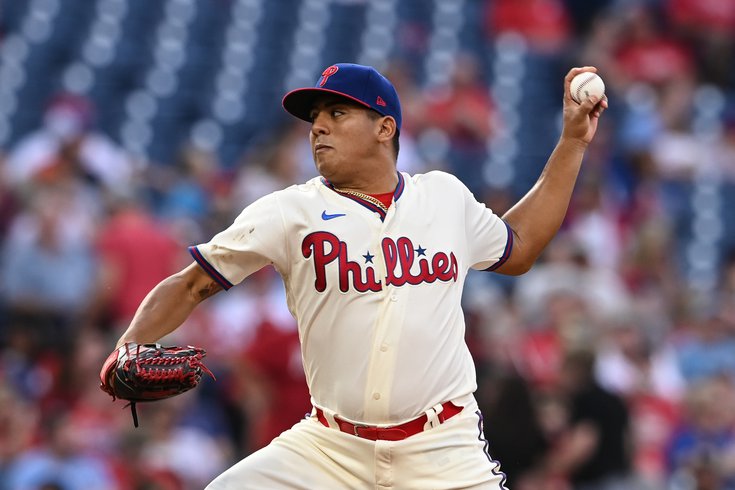 The Phillies could credit their starting pitching for propelling them into one of the most unlikely championship round appearances in this city's history. The staff was also one of the main catalysts for their World Series downfall.

Entering October with a staff essentially boasting two aces, one solid middle of the rotation starter and, well, nothing else, the Phillies overachieved with a vengeance, riding epic performances from Zack Wheeler and Aaron Nola to upset wins over the Cardinals, Braves and Padres.

But a combination of the thin pitching staff and the rigors of an extremely long season reared an ugly head and saw those two aces and the staff around them unable to pitch enough solid innings to keep the Astros loaded offense at bay.

The offseason is now upon us and the Phillies will no doubt be doing everything they can to upgrade the pitching around Wheeler and Nola. Those two hurlers are guaranteed to be at the top of the rotation in 2023 — but the rest of the starting five is completely unknown.

Next week we'll dive into all of their options at SP, from free agency to the trade market. But today, let's briefly evaluate the five pitchers who combined to start 98 games for the Phillies in 2022. Should the front office want any of them back?

Suarez started 29 regular season games for the Phillies and was a nice change from their mostly right-handed staff. He posted solid numbers and — since he is under team control for the next three seasons via arbitration — Suarez almost certainly only be moved via a trade.

The 26-year-old really came on in the playoffs, as the bonafide third starter and an occasional lefty specialist from the bullpen. Suarez had a 1.23 ERA in 14.2 playoff innings and the Phils did not lose in any of his starts. He did not allow a run as a reliever either. There are a lot of things up in the air but it seems extremely likely that Suarez will return as a starter in 2023.

News came out earlier this week that Eflin was going to test free agency, but that doesn't mean the Phillies wouldn't welcome the veteran 28-year-old back. Battling a knee injury all season, Eflin proved to be a valuable piece in the postseason, appearing in 10 games often in high leverage spots.

If the Phillies are unable to make a big splash at starting pitcher, and are hesitant to call up top prospects Mick Abel or Andrew Painter too quickly, (and if Eflin doesn't find work elsewhere), he is a prime candidate to be brought back as a fifth starter to begin the year.

Thor came to the Phillies as a trade deadline acquisition to fill a needed fifth starter's role and in 10 starts he was serviceable. The Phillies can probably do better, as sadly Syndergaard's flame throwing ace days are behind him. He was helpful in the postseason, but he also did not have the full faith of manager Rob Thomson to be a regular contributor. There is a chance he returns on a team friendly deal, possibly competing for a roster spot in training camp, but one has to think if Syndergaard is still on the team in 2023 there are going to be issues with the starters again.

Gibson was the mop up pitcher in the postseason. Despite starting all 31 games in the regular season, his numbers left a lot to be desired. Gibson is another cheap, veteran and familiar option the Phillies could bring back in a pinch next season, but the ideal pitching staff would not include him for 2023.

Falter is an extremely interesting case. He was a disaster in his only playoff appearance, but during the regular season stepped in as a replacement starter and more often than not gave the Phillies good innings. He is just 25 and under team control, so will likely be with the team in 2023. Will they try and work him into a bullpen role? Will they relegate him to the minors in case they need him as a sixth starter again? A staff of Wheeler, Nola, a big name free agent, Suarez and Falter could be a possibility.

As we mentioned, there are a ton of arms available that the Phillies will at least be kicking the tires on — ranging from Justin Verlander to Jacob DeGrom to Clayton Kershaw. Seeing how the top of the market develops will determine what the Phillies approach will be at rounding out their starting pitching staff. Whether they back up the brinks truck to bring in Trea Turner will also be a factor.

Would the team look at the trade route, perhaps moving on from Rhys Hoskins in an attempt to land a team controlled starter?

One would hope the Phillies will have a little more depth heading into 2023, particularly with a handful of really talented prospects knocking on the door of an MLB role, like Painter, Able, or Michael Plassmeyer. Don't be surprised to see a few veterans brought in, potentially a big name, and a very competitive battle for a final spot in spring training.

If there is one thing the Phillies should take away from their unsuccessful duel with Houston, it's the importance of having multiple guys who can go more than four innings in a postseason series. The Phillies may have been two solid starting pitchers away from hoisting a world championship trophy last week.