Stay or go: Which Phillies bullpen pieces should return for 2023? 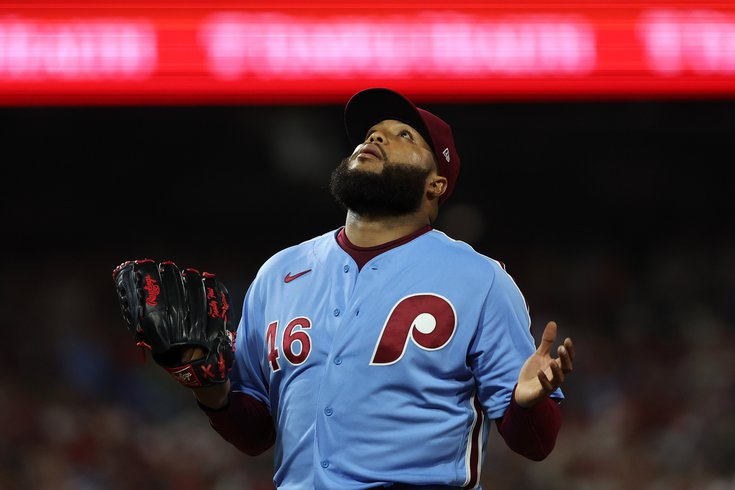 Jose Alvarado will be remembered for... a long time by Phillies fans.

The Phillies bullpen wasn't exactly a strength in 2022.

Relative to how awful it was over the past few seasons, it wasn't as big a hinderance as it has been — but with the Phillies looking to upgrade their pennant-winning roster for another shot at a championship next season, the relief staff will surely be a point of emphasis.

It's interesting that the Phillies were able to minimize the impact of their weak bullpen by utilizing them for the second-fewest number of innings (ahead of only the World Series-winning Astros). It's also a little weird that they had the fourth-best strikeout rate, but the third-worst walk rate of any unit in 2022.

The Phillies will be looking for innings eaters, for more strikeout pitchers, and potentially for a regular closer. How much of their pitching staff will be back next season?

If you had to guess who pitched the most innings out of the bullpen for the Phillies last season, Nick Nelson probably wouldn't be your choice. But his 68.2 innings over 47 games paced the team. He wound up in sort of a mop up role, posting a modest 4.85 ERA. He's a veteran who made the playoff roster, but isn't a prime candidate to return to the pen. In his favor, however, is that he is under team control for one more year.

Bellatti seemingly came out of nowhere to assume a fairly prevalent role in the bullpen this season, as a journeyman in his early 30s. He was a key postseason arm, appearing in eight games with a 1.29 ERA. He's under team control and cheap for another two seasons and will likely be competing for a job in spring training.

Oh boy. This one will be painful. Alvarado is a flamethrower who had a 3.18 ERA and was pretty successful in very high-leverage spots throughout the season and early postseason. But in the World Series, due in part to the managerial decisions of Rob Thomson, it all unraveled. Alvarado was responsible for blowing the deciding game of the World Series a game after he allowed three singles in an ugly appearance in Game 5.

Is this enough to cost him his job? With one final year of arbitration left on his ledger, Spotrac expects he'll command somewhere in the $4 million range. For a late-innings lefty specialist, that's not overly expensive. But will Phillies fans welcome him back?

Domínguez has proven he is a reliable late-innings hurler and is probably a shoo-in to return next season in a pivotal role. He is 28 and will have his salary determined by arbitration after posting a 3.00 ERA in 54 regular-season innings. He was very effective in key postseason situations as well.

Hand had a 2.80 ERA during the regular season, but it really feels worse than that. He was in the game during some really tough losses in the regular season and served in a mop-up role in the playoffs. He is 32 and is a free agent. If another team doesn't sign him he could return as a veteran competing for a job in camp.

Knebel started the year as the Phillies closer and had a little success — but was inconsistent at times before a shoulder injury shut him down prior to the postseason. His health will determine if he gets another job right away and if the Phillies come calling again. In his age 30 season Knebel had a 3.43 ERA and 12 saves.

At 28 and under team control in 2023, it seems likely Brogdon will hang on to at least make it to spring training, and compete for a middle innings role. He was somewhat surprisingly successful in the postseason after a respectable 3.27 ERA during the regular season.

After signing a big contract, injury issues spoiled his first stint in Philadelphia a few years ago. Robertson was a trade deadline acquisition this past summer and returned to make up for his previous bad luck. He had a 2.70 ERA in 23.1 innings during the stretch run before assuming a very big role in the playoffs — tossing four scoreless innings in the World Series and appearing in 11 games in total. At age 37, he may not be what the Phillies are looking for, but his leadership was certainly a boost for the inexperienced Phillies this October, and for the right price the door would certainly be open for a return. He is a free agent.