How will the Phillies round out the rest of their active roster for 2023? 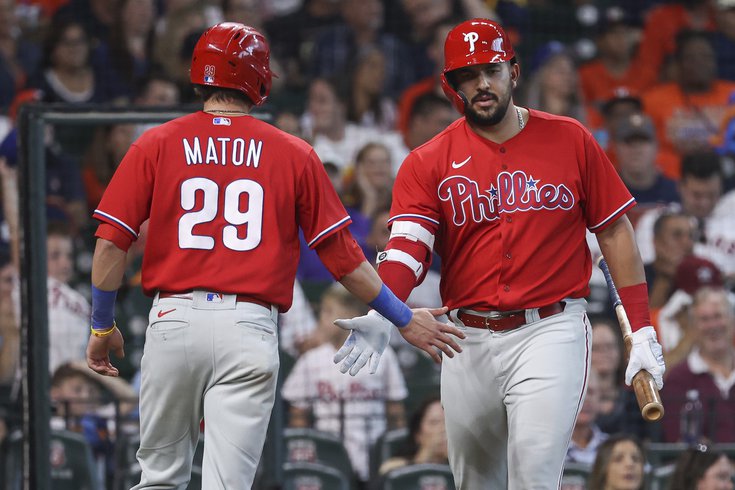 Will the Phillies' bench include Nick Maton and Darick Hall in 2023?

It'll be just over two months until pitchers and catchers report to Clearwater for the defending NL Champion Phillies — but that doesn't mean it's too early to try and predict what their 26-man roster will look like when the new season starts next spring.

That is in large part because the Phillies have already made the hard decisions, inking a trio of high-priced free agents during MLB's Winter Meetings in Trea Turner, Taijuan Walker and Matt Strahm. The team is already close to eclipsing the luxury tax threshold and it's not even 2023 yet.

Philadelphia is certainly going to be bringing in bullpen depth and perhaps some position-playing veterans to compete for roster spots in camp, but we have enough information to be fairly accurate in our early predictions.

Here's how we see the 26-man roster breaking down for the 2023 Phillies:

No surprises here, as the best catcher in baseball will return and be backed up by Stubbs, who was a very solid all-around backstop in limited opportunities last season.

This group also seems pretty set. The Phillies, as of right now, seem most likely to stick with the outfield arrangement they had in the postseason and use Darick Hall as their regular DH. The above group of infielders being on the roster also would allow the club to have Hoskins DH with Hall playing first base — which can't be any worse for the defense, right?

Stott will move to second to open up shortstop for the $300 million man Turner. Bohm's improved defense will continue to man the hot corner at third.

The Phillies' own website has Maton listed as an outfielder, but he is more of a utility man who can play all over the field. He and Sosa will fill that role on this roster.

Vierling seems likely right now to be the fourth outfielder. The front office could sign a veteran to compete for the final outfield spot in spring training.

The only leap here is Painter, who we are going to project breaks camp with the Phillies. He's gotten buzz as being big league ready after his incredible showing in the minors last year, and he will have competition from fellow youngsters Mick Abel, Griff McGarry and others. The fight for the fifth starter spot will be the top storyline in spring training. Painter is the most talented arm of the three and the Phillies will want to bring the best five guys with them to South Philly.

Don't be surprised if the Phillies do go with a sixth starter at times. That man could be Bailey Falter, who filled in admirably as a spot starter often last season. One of the biggest criticisms you can make of the 2022 World Series roster was its lack of starting pitching depth and the fatigue that plagued the entire staff when November arrived. The team will do whatever it can to avoid that in 2023, and keeping their arms fresh will be a priority. More than five starters will take the mound — regardless of injuries — as the team looks to be able to have them all go deep into games next postseason.

This is the most up in the air positional group for the Phillies. Let's break down our group of eight:

• Domínguez, Alvarado, Strahm (who was signed earlier this week) and Bellatti are the four biggest locks here. Brogdon is another likely returner from last season.

• Falter could wind up in the bullpen, making a few starts for the team — but he could also remain in the minors making starts in anticipation of the occasional call-up. Because Falter has one minor league option remaining, the expectation here is he'll be in the majors at least to kick things off.

• The Phillies ran into some lefty-specialist issues in the playoffs (having to use Suárez out of the pen at times), which is why adding a third lefty might be a priority. The best remaining one is Rogers, and we'll go out on a limb here and project that the Phils make him an offer.

• The last slot in the pen will go to a veteran. We expect the team to bring in some arms to fight for the slot in camp. Rosenthal has elite closing experience and is coming off a bunch of injuries that cost him the last two seasons. Bringing him in on a minor league deal is a low-risk, high-reward move — and a cheap one. The Phillies could ink him for cheap to see what he has and if he looks like his old self he could round out the Opening Day pen.

• Hall has two minor league options and Maton has one. One of these two bench positional players could be left in Triple-A for a ninth relief pitcher if the Phillies elect to go with a 14-man staff.

Harper's Tommy John surgery will have him sidelined for a few months. When he returns he's expected to DH for a bit until he's fully healthy and can play right field at the tail end of the regular season.