An absolutely electric crowd, maybe the greatest Citizens Bank Park has ever seen (so far), was on its feet all night. 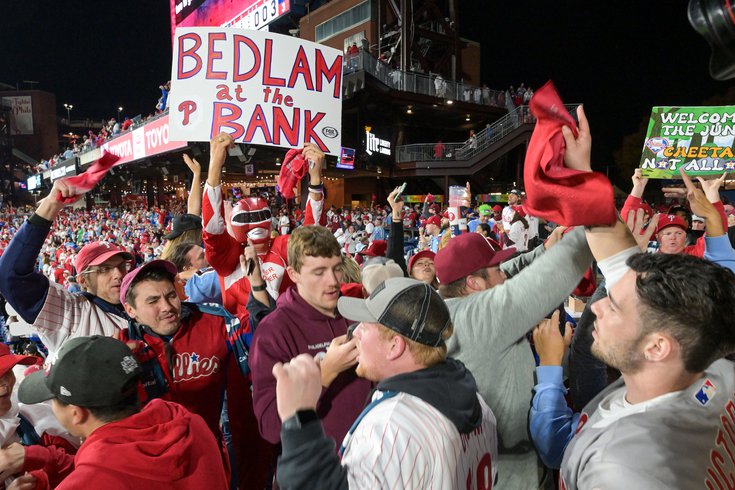 Fans celebrate after the Phillies beat the Astros, 7-0, to take a 2-1 lead in the World Series at Citizens Bank Park on Tuesday night.

South Philadelphia started at 11 Tuesday night, but there was always another level to reach.

After 13 years, and a day, the 2022 Phillies' miracle run through the postseason brought World Series baseball back to Citizens Bank Park, and the nearly 46,000 in attendance made sure Game 3 wouldn't ever be a night to forget.

When Nick Castellanos made yet another sliding catch in right field for the game's first out, he was met with maybe the loudest cheers of his entire career. He stood up, threw the ball back in, then turned to acknowledge the crowd. The cheers got even louder.

Kyle Schwarber drew a lead-off walk, the red rally towels waved, the crowd roared. Then, after Rhys Hoskins struck out and J.T. Realmuto popped out, Bryce Harper stepped into the batter's box to swarms of MVP chants.

He needed just one pitch from Houston's Lance McCullers Jr., a hanging breaking ball. Everyone knew as soon as the ball left the bat that it was sailing over the fence. The place shook.

The Phillies went on to homer four more times, shutting out the Houston Astros 7-0 and taking a 2-1 lead in the World Series.

An absolutely electric crowd, maybe the greatest this ballpark has ever seen (so far), was on its feet the entire time, relentlessly waving the towels, cheering on the Phils, and letting José Altuve and the Astros know exactly how they felt about them.

Quiet? In the World Series of all places? This city doesn't know how to be.

"Dude, this is who we are," said Tesh Patel, who was dressed as Mummer Jason Kelce for a late Halloween at the Bank (many were). "This is Philadelphia! Listen to the crowd. Just being here gives you goosebumps... Enough said."

"It's absolutely unbelievable, a once in a lifetime experience here at the Bank," said fan Josh Kappes. "We have shown Houston what it looks like to be an actual fan base at a World Series game, and our team has not disappointed us."

Kappes, who lives in North Carolina, made the trip up for Game 3 with his son Samuel. They were tailgating on Monday as the rain was falling and when they made their way into the stadium, the postponement got announced. It threw a bit of a wrench in things, Kappes said. The flight home had to be rearranged, so did the hotel stay.

But it's the Phillies in the World Series.

"We got it all worked out," he said. "We would never miss this."

Samuel, 13, stood by the rail under the seats in the right-field terrace wearing a gray Matt Stairs jersey. He wasn't around yet to see the hitting specialist rip one into the night on the way to the '08 title, but he was here to see Harper, Schwarber, Hoskins, Alec Bohm, and Brandon Marsh all go yard

"I've never seen so many homers in one game, I mean in person before, it's crazy," Samuel said.

Harper's Heroes – Blake Biren, Greg Biren, and Randy Farrow – saw all the homers too, including the one that got it all started way back in April.

On Opening Day, each dressed as different Avengers, the group was perched up over top Ashburn Alley and watched Schwarber's leadoff bomb sail into the seats. 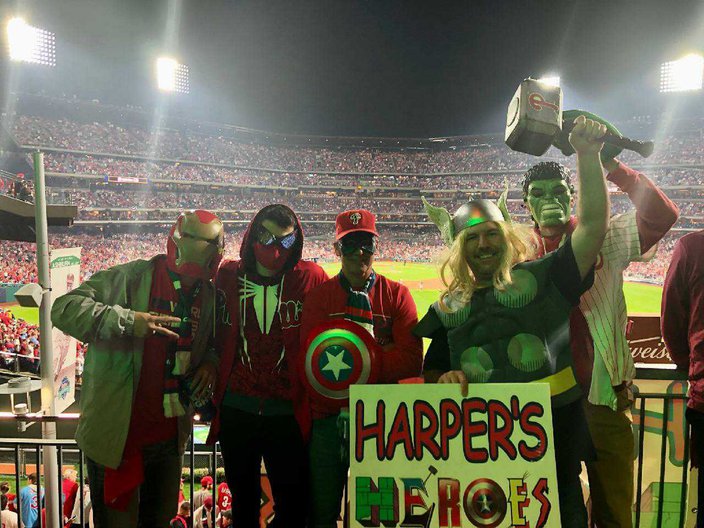 None of them expected, eight months later, to be back in that same spot for the World Series, but they fully embraced it. How could you not?

"Hey, man, this is the first playoff game I've ever been to," Blake Biren, the night's Iron Man, said. "But there is something about being in Philadelphia at a home game that no other sports city in America can match."

"I'm bringing my son here," said Greg Biren, Blake's father and the group's Captain America. "I'm 59 years old, we won the World Series when I was in high school (1980) and now I'm back with my son? It's the greatest experience in the entire world to be here and share this experience with my son."

But the rain the day before changed up their plans too, as it did for everyone going. They got down to the sports complex around 1 o'clock Monday to tailgate. The forecast wasn't looking good and only got worse as the day went on.

They still went into the ballpark though, but by the time they got their banner up out beyond centerfield, the game was called. It was time to go.

But as Randy Farrow, the Thor (erm...other Thor), walked back through the parking lots, he kept hearing the Phillies' victory anthem "Dancing on my Own" playing everywhere even without a game to play.

He took it as a good omen and saw the rain that postponed Game 3 from a different perspective.

"I think it was a baptism," Farrow said. "I think it was a cleansing. We got an extra day of rest, and you know what? We came here excited, we got the jitters out and we're focused to watch a game now."

And the Phillies, after splitting the first two games of the series down in Houston, came back home focused and ready to play.

They'll have two more games at a Citizens Bank Park that's only going to get crazier and stand just two wins away from the franchise's third-ever world title.

And all this after a rollercoaster of a regular season, where no one could be sure the Phillies would even make it until the very end. The playoff run of a lifetime followed.

"Talk about a Cinderella story?" Patel said wearing the outfit of a victorious underdog from a few years prior. "This is it right here."