What you missed from Sixers vs. Kings: a furious comeback without their two stars

With both James Harden and Joel Embiid sidelined, the Sixers pulled out a comeback win in Sacramento. 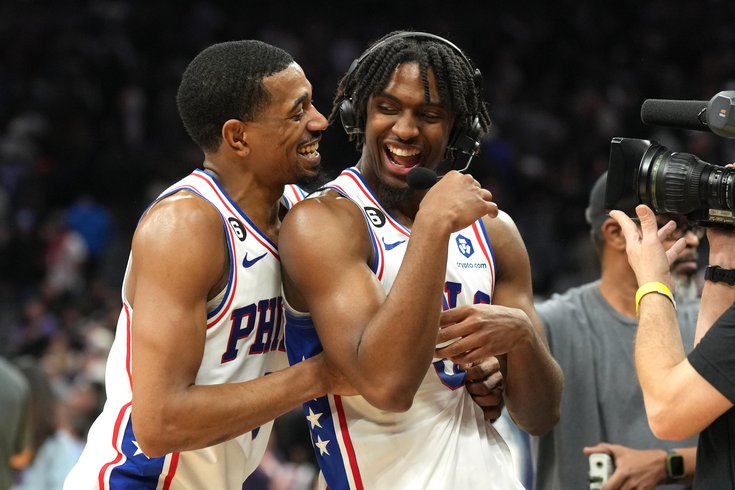 If you decided to ignore the Sixers entirely on Saturday night, I can't say I blame you. The Eagles' blowout victory over the Giants was the priority around these parts, too, which was the case long before Joel Embiid and James Harden were ruled out for injury management purposes. Sixers-Kings had all the makings of a sad end to an awesome Philadelphia road trip, but somebody forgot to tell the Sixers that was the case.

Here are some standout moments you might have missed while watching the Birds on Saturday night.

The big story: closing a road trip without Embiid and Harden

In the history of the franchise, the Sixers have had two undefeated road trips of five games or more. One came during the 1984-85 season, a six-game streak for a team that would go on to win 58 games and appear in the Conference Finals. The second just concluded, with Philadelphia finishing off a 5-0 road trip despite Joel Embiid and James Harden sitting out the final game.

In the first half, with the Eagles in the midst of a playoff beatdown, it did not look like the Sixers were on the verge of making a small piece of team history, or even playing an interesting game. Turnovers were the story of the first half for Philadelphia, with 11 first-half giveaways giving the Kings a leg up during a 74-point start to the game. If an undermanned Sixers squad had let go of the rope and accepted a beatdown, few people would have noticed or cared, and we could have trotted out the, "It's the end of a long road trip" cliche and called it a night.

But after cutting a 21-point lead down to 10 before halftime, the Sixers came out in the third quarter with plenty of fight left in them. And nobody stood out more than Tyrese Maxey, who scored 13 of his 15 third-quarter points in the first five minutes of the period. Given an opportunity to run the show on Saturday night, Maxey did not turn in the most efficient night in the world. One stretch of ridiculous shotmaking, though, was about enough to swing the game in Philly's favor. It would have been hard to imagine Maxey attempting a shot like this during his rookie year, let alone making it, yet there he was from the logo against Sacramento:

If that run of elite shotmaking tilted the game back toward Philadelphia, it was a combination of grit and late-game execution that ultimately got this game over the line. Philadelphia was the inferior offensive team in the fourth quarter, looking powerless to stop De'Aaron Fox and Domantas Sabonis in the pick-and-roll and well off the pace from the field. The Sixers shot just 36 percent from the field in the fourth quarter compared to 55 for the Kings, a discrepancy you'd think would be the difference in a close game. The difference-making stat ended up being what usually kills Philly in losses — they secured seven offensive rebounds in the final frame, with Paul Reed (3), Shake Milton (2), Montrezl Harrell (1) and P.J. Tucker (1) all creating extra possessions for Philadelphia.

This was not just a good close to the game on the glass, it was one of the best offensive rebounding games for any team all season — the Sixers rebounded nearly 41 percent of their misses on Saturday night, a mark that put them in the 97th percentile of games played this season, and they commandeered 48.6 percent of their misses in halfcourt possessions. All told, they had 16 offensive rebounds on Saturday night, preying on Sacramento's desire to run with a relentless commitment to the glass.

There were plenty of hairy moments along the way before Philadelphia was able to secure this win. Shake Milton looked to have the game in his hands with about 30 seconds left, only for Milton to throw the ball out of bounds under duress instead of slowing the game down. Up four again in the final 10 seconds, the Sixers somehow allowed a Keegan Murray three in the corner to cut the lead to one with eight seconds left on the clock. This was purely about defensive structure on the play — the Sixers sent two at the ball to try to get it out of the hands of De'Aaron Fox, for some reason leaving the corner open in a situation where only a three could hurt them.

And a moment of some controversy happened with Philadelphia up by three on the final possession. A Matisse Thybulle foul of Harrison Barnes with three seconds left put the latter on the line with a chance to tie the game, with the officials ruling Barnes deserved continuation on a play where you probably could have argued in either direction. But Thybulle was let off of the hook a moment later, when Barnes missed the first free-throw of three and effectively ended Sacramento's chance to force overtime.

It wasn't a particularly pretty win, but the Sixers figuring out a way to win ugly and close out a spectacular road trip is what counts. The Kings currently sit third in the Western Conference, poised for their first playoff appearance in quite a while, and the Sixers managed to fight off all of the natural excuses to grab a win. The resilience of this group has been impressive all year, with this victory one of the more impressive gut-check efforts of the year.

Maxey could not buy one for most of the first half, and his hot start to the third quarter did not turn into the sort of barrage you hoped it might as he got rolling. But this is a night where I think you could toss efficiency out of the window and focus more on the belief he gave them with that scoring burst, pulling the Sixers back into a game they had no real business being in.

One important stat for Maxey not mentioned above — he only turned the ball over twice all night, taking care of the basketball in a high-usage role as the head of the snake on offense.

• This was just a quintessential Paul Reed performance. He had one of my favorite moments of the second half, pulling down his own offensive rebound for a putback layup after attempting a spinning shot attempt to absorb contact from Kings big man Richaun Holmes. Was the spin necessary? Probably not. But Reed's ability to attack the glass immediately after his goofy-looking attempt was a reflection of the glass-crashing prowess he showed all night, the Kings unprepared for his activity around the rim.

I continue to be impressed with his craft around the basket this year, as Reed looks like he's slowly figuring out the nuances of pick-and-roll play as well as playing in NBA traffic. He had a soft lefty finish over the outstretched arms of Trey Lyles late in the third quarter, looking totally in control while depositing a tough two points.

• I'm as tough on Montrezl Harrell as anybody else, but this is precisely the sort of outing you'd hope he could have on offense with Embiid on ice. 7/8 from the field, five offensive rebounds, a pair of assists, and 17 points to give the Sixers some scoring punch.

• Did you expect anyone else except for Georges Niang to hit the biggest three of the game for Philly? With the Sixers up one and headed into a timeout with all the momentum on Sacramento's side, Niang came barreling around a screen and hit a three off of movement to briefly quiet the road crowd. Tobias Harris fouled out of this game with three minutes and change to play, and being able to call Niang in off of the bench was a saving grace for Doc Rivers.

• Speaking of Rivers, yet another example of the head coach managing to pull a win out of a tough, undermanned scenario this season.

• On the broadcast right before Murray's late corner three, Kate Scot and Alaa Abdelnaby mentioned that Montrezl Harrell was being brought in for a critical final possession for defensive purposes. I don't think they were off-base in assessing why Harrell was being put on the floor — the Sixers clearly wanted a bit more size on the floor with Sabonis a constant threat — but man, it is a sad state of affairs when that is a defensive chess move in crunch time.

• The Sixers got contributions from just about everyone in this game, with Danuel House Jr. coming out of cold storage to hit a couple of threes and play decent-ish defense on the perimeter. P.J. Tucker managed to do nothing of the sort, putting up another goose egg in 19 minutes while being Philadelphia's biggest negative in the plus/minus department (-14).

There were some decent individual possessions on defense for Tucker, but they really better hope he's saving something for the playoffs.