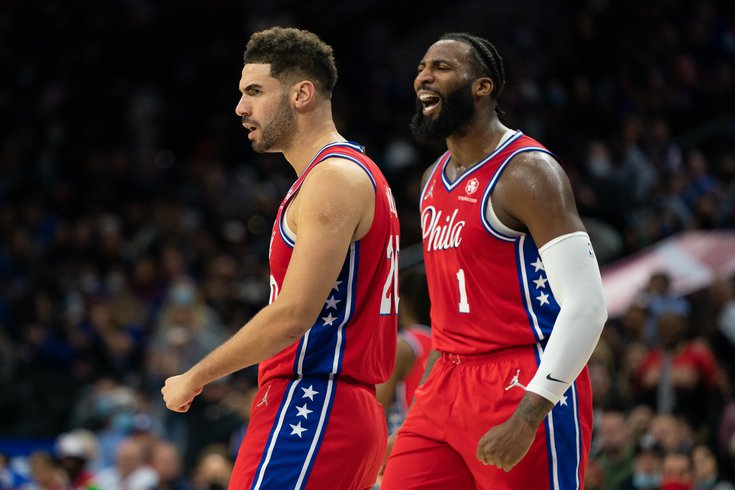 Doc Rivers spent all of the Sixers' training camp talking up their offseason additions to anybody who would listen. Perhaps it's because of his personal involvement in Philly going after Andre Drummond and Georges Niang — any coach likes claiming a feather for their cap with a player personnel win — but Rivers talked a big game about the "silent" pickups they made and promised they would matter when the games began.

Seven games into the season, Rivers looks like he called his shot on this one. Drummond filled up the box score (14 points, 15 rebounds, seven assists and five steals) in Joel Embiid's absence, and backup forward Georges Niang earned MVP chants down the stretch in the second half, giving Philly's second unit a huge lift with a 21-5-5 night at the office.

"Joel told me to never let that happen again," Niang joked about the cheers he got. "But the fans have been great and have welcomed me with open arms, so I'm super thankful."

When you play the way these two have in reserve roles, it's not all that difficult to get this town to embrace you. And with three of their starters missing from the opening tip, Drummond and Niang loomed large in the victory over Portland.

Filling in for the big guy

Brought in to give Embiid a support system when he hits the bench, Drummond has looked the part of a fallen star looking to pull himself out of minimum contract territory. And though his current role requires him to be in tune with what Embiid does or doesn't need at any given moment, he told reporters Monday he was in the dark when it came to Embiid's availability against the Blazers.

"He hit me with the okey-doke today, usually he'll take a couple of plays off at shootaround just to rest, so I didn't really know what was going on until I got here," Drummond said. "Then I seen the alert on Twitter, and I said oh shit, I'm starting today."

If, as Drummond suggested, he lacked prep time for his role against the Blazers, it never showed up during the game. Against a Portland team with one of the most lethal backcourt tandems in the league, Drummond played his role as defensive anchor expertly while managing to tie things together for the group on offense.

Five steals immediately stand out in the box score for a big man, a number that immediately suggests an abundance of gambling. Reality is kinder to Drummond, who took advantage of good positioning against Blazers pick-and-rolls to bat away entry passes without leaving himself totally out of position if he whiffed on the deflection opportunity.

(Drummond also has some cover in the form of Niang on both of these plays, who can tag the roller without worrying much about leaving iffy shooter Larry Nance Jr. alone on the perimeter.)

If you can believe it, Drummond is second on the team in steals through their first seven games of the year, trailing only the human octopus himself, Matisse Thybulle. It has added a dimension to their backline without the Sixers needing to take a hit to their size and physicality in the middle, and it has allowed Philadelphia to play at least passable defense despite the absence of last year's DPOY candidate, Ben Simmons.

Passing, though, has been Drummond's true swing skill on a night-to-night basis. In training camp, teammates on the second unit remarked that they were unprepared for the sort of passes he would throw them in pickup games, eventually getting used to bullet passes hitting them in the hands when they made cuts toward the basket. Though his running mates have claimed they got used to it, it's not clear if it has taken hold with the coaching staff yet.

"He's an excellent passer, he likes to gamble with his passes quite a bit," Rivers said after the game. "That's something we are talking about, but he had zero turnovers tonight, so that was good."

Drummond having a big passing night against the Blazers was foreseeable on some level. Under new head coach Chauncey Billups, the Blazers are bringing their bigs higher and trying to force the basketball out of the hands of guards, relying on back-end rotations to prevent clean looks for big men at the rim. There have been times this year where Drummond's passing has erred on the side of chaos, but he was a big part of the offense humming against Portland, making quick reads on the move to promote ball movement as much as anyone on the team.

These sort of nights are exactly why the Sixers took a chance on Drummond, a fallen star who has played his way out of favor with a lot of people around the league. After a high-profile flameout in Los Angeles (and considering a years-old beef with Embiid), there were more than a few raised eyebrows when they signed him. So far, however, the calculated gamble looks like it has paid off in a big way.

"I don't think I have anything to prove," Drummond said Monday night. "Anybody that's watched me in my career knows what I'm capable of. This is nothing new, something I do on a nightly basis, just in a different role."

Versatility off of the bench

Rivers talking up Niang all training camp evidently had more history behind it than we were aware of at the time. After the Sixers did battle with the Utah Jazz right before the All-Star break last season, Rivers told reporters Monday that he made a quick call to Morey before getting a bit of time off.

"I said, 'Hey, Georges Niang is available, we got to try to get this guy.' And obviously we tried," Rivers said. "We just didn't get him. So he was on our target [list] literally from midseason last year."

At the time of his signing in the summer, Niang was viewed as a small but useful pickup that would upgrade their backup four spot and give them a bit of lineup flexibility. What he has shown so far has far exceeded that, and certainly exceeded any expectations you might have from him coming out of the Utah Jazz program.

In Utah, Niang had a fairly defined role and stuck to it, making his money as a reliable floor spacer and a competitive (if shaky) defender who always gave you everything he had. Since arriving in Philadelphia, Niang has continued to underline the importance of staying in one's lane, something he did once against after Monday's win.

Sure, the bulk of his money is still being made at the three-point line, where teams close out hard on him even when he has a down night from deep as he did against Portland. But he has been more than a stretch four for the Sixers, using the threat of his jumper to beat guys off-the-dribble and then find teammates who became available to him.

The key has not necessarily been Niang's passing skill, but his quick decision-making. Niang already has a plan when the ball is on his way to him, and on opportunities to attack closeouts, that is enough to get him past defenders and into more dangerous areas.

"Doc has given me the opportunity to grow and show what I actually can do, and [has] not really given me any limitations," Niang said Monday. "It's been great, it's only been a couple of games, but to continue to grow here, expanding my game and helping the team win, I think that's the biggest thing I've taken out of this. With the limitations I do have, it still stays within team basketball and helps us win."

While Niang picked it up as a scorer in the second half, it's these little plays that will make him a meaningful role player on a full-strength version of these Sixers.