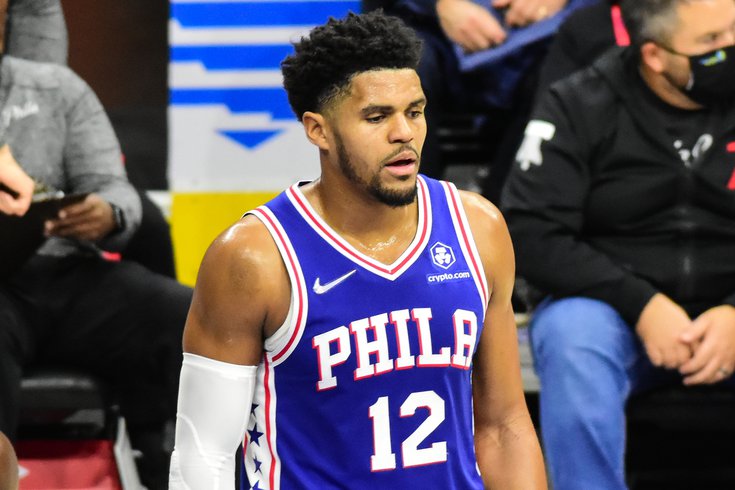 Sixers forward Tobias Harris missed Monday night's game against the Portland Trailblazers as a result of the NBA's health and safety protocols, casting doubt on his status as the team enters a tough stretch of the schedule.

Harris, who was seen warming up on the Wells Fargo Center floor in the hours before the Portland game, was scratched from the game around a half-hour before tip-off.

The NBA's health and safety protocols necessitate frequent testing for unvaccinated players, while vaccinated players are not subject to regular tests except for in limited situations, such as when players show COVID-19 symptoms or have a known exposure to a close contact with COVID-19.

While the Sixers have not yet elaborated on Harris' status, a player who tests positive is expected to miss a minimum of 10 days, save for a scenario where they produce two negative tests back-to-back. In Harris' situation, that would (in theory) mean he will likely miss at least six games — Monday's game vs. Portland, plus upcoming games against Chicago (2x), Detroit, the Knicks, and the Milwaukee Bucks. Next Thursday's game vs. Toronto would also be in some doubt, with a most likely return coming next Saturday, 11/13 against the Indiana Pacers.

Without overstating the extent of the problem until we have more information, this situation has potentially disastrous consequences for a Philadelphia team still trying to find its footing. The Sixers' schedule was grueling enough over the next nine days to warrant getting Embiid a night off on the front end, and when this homestand is over, the Sixers begin perhaps their toughest stretch of the season, a six-game trip that takes them out West, returns them home for a quick pair, and then has them out on the road again to kick off December. Building a cushion into their record before then was fairly critical for this group with or without Ben Simmons, and now the Sixers are between a rock and a hard place, potentially down two of their best players while managing the health of their franchise center.

The Sixers will have their first opportunity to show what their depth pieces can do Monday night against Portland, and we'll have more on this story as it develops.