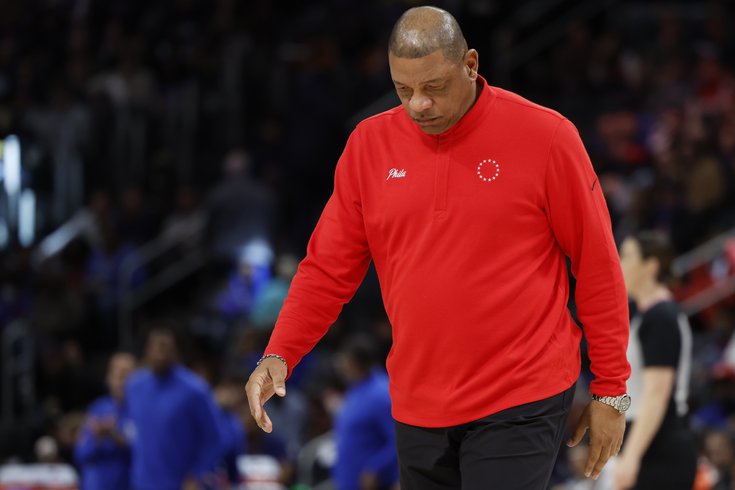 The thrill is gone.

It’s not even a faint feeling that returns every now and again, rather removed from our existence. The thrill is no more.

What the hell happened?

James Harden coming here was a sign of the team moving in the right direction, certainly they would be better than losing on their home court in game 7 in the second round. The expectations were to the NBA Finals, at least!

Instead, the final ten days of the regular season boiled down to Sixers fans complaining about not having an MVP on the roster and the head coach melting down at press conferences. A far cry from any battle hymn publicly sung on Twitter ahead of the roasting of the Toronto Raptors.

The hope is gone.

It’s a logical conclusion as fans would rather argue with strangers about who the league-selected MVP is over how far the team can truly go. I don’t blame fans for this, but it’s hard to ignore.

The confidence is gone.

They have no depth – despite the emergence of Paul Reed – and have a coach who gets in the way more than anything else. Yes, they have Joel Embiid – MVP or not – and Harden, and Tyrese Maxey, and – at times – Tobias Harris. That ain’t enough. We all see it. We all know it. Landing Toronto as a first-round matchup has seemed to exasperate the fanbase to the point where online discussion is reduced to an award and counting the clock before the coach gets fired.

Don’t be surprised if people are floating out the idea – be it in a fake world like Twitter or real world radio shows – that the team is better off losing in the first round to fire Doc. Even asking people if they would rather have an early loss to fire Doc, or win it all and keep him for 10 years. This is what the conversation has been reduced to all around the city.

Sure, the team will do its part to ramp up all the hype, and fans will be rocking once the game starts, but that’s not how we usually operate. This isn’t the norm of a team with deep-playoff expectations, not in this city.

So, again, what the hell happened? Ben Simmons? Can’t blame him. The loss of Simmons can’t even be used in the MVP discussion because the other guy in Denver lost two of his top teammates.

Nick Castellanos? Did the Phillies steal away so much thunder from the Sixers that fans would rather project a 162-game season than a 2-3 round playoff set? No. Because people are still talking about the Sixers, it’s just not about their immediate future. Not enough at least.

Did Howie Roseman steal back the thunder with some big off-season trade with the Saints? Maybe for a day, but he hasn’t blocked out the Sixers from our minds. The Eagles still have a QB situation in flux and are far from any beacon of stability, so no, Roseman isn’t to blame either.

Is it our undying need to call out the “haters” no matter what positive thing happens to anyone we root for in this city? Probably. But it’s not the driving force. This weird human phenomenon of seeking out an idiot who doubted you before celebrating the gigantic positive thing going on right in front of your eyes is weird. It’s complex-level weird. But it’s not the reason why we’ve given up hope on the Sixers.

Doc Rivers is doing his part. The meltdowns and attacks on professionals who have track records of being nothing, but professionals are clear signs of being in over his head. Doc Rivers is in over his head. The four names of significance that he tried to challenge, only looking the fool instead, have been providing agenda-less coverage of the Sixers for years. He’s clueless and it’s obvious.

He lashed out at Dei Lynam – one of the most respected professionals covering the game of basketball in the country. Kevin Kinkead has provided educated insight and a fair assessment of the team. Derek Bodner is one of the nicest people on the planet, a grinder, and earned his level of connections with the team and players. Finally, our guy here, Kyle Neubeck is without a doubt one of the best NBA writers you will find in the world. He’s not only fair with his top investigative methods, but also sincere in wanting the team to succeed. They all do but keep it honest in their coverage.

Rivers couldn’t handle the heat coming his way, so he did what any bully would do, lash out at the defenseless reporters.

Maybe it’s all Rivers and the Jokic voters?

Rivers has sucked away some of the energy, and the MVP not going to Embiid will be disappointing, BUT this has dominated our lives for the past two weeks. It’s not a representation of a fan base that’s confident in even getting out of the first round. If anything, we as Philadelphia sports fans take things TOO far, right away.

How many people had the Phillies winning 100 games after their moves? Or Jalen Hurts in the Super Bowl after working out in the offseason? Or the Flyers in the Cup if they hire John Tortorella? This is what we do!

Yet, it’s absent with the Sixers and I don’t even know what will bring it back. The team has a huge battle in front of them with the Raptors, and I know the Center will be maxed out, but our energy and buzz normally precedes our arrival. Embiid and Harden should get that same level of juice flowing ahead of time.

Be it Doc, the MVP, or just a sense of reality settling in – something feels different this year.