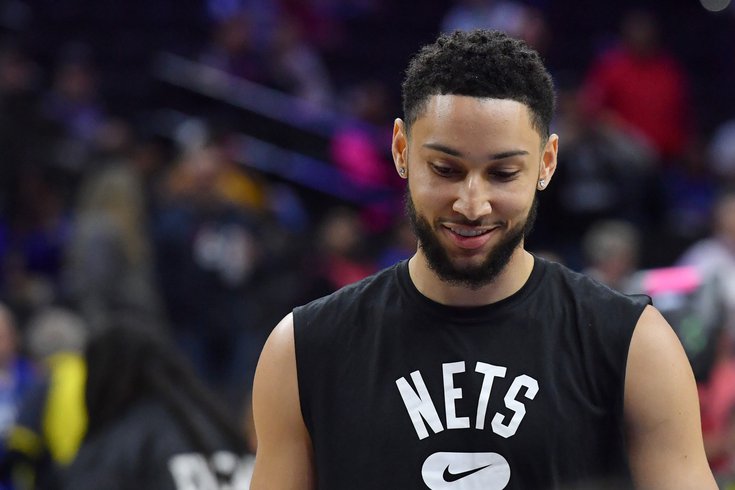 Ben Simmons with the Brooklyn Nets.

The Sixers finally announced their preseason schedule on Friday afternoon, so start preparing your hot takes and parade position when they have their first big moment in a meaningless game this October.

The marquee matchup on the calendar, at least in theory, is that meeting with Ben Simmons and the Brooklyn Nets on October 3. It's anyone's guess what the Nets will look like at that point, but if things remain stagnant on the trade front into training camp, it could be the first time Simmons will take uniform in a matchup with his former team.

That comes with several huge caveats, the first being that we don't know if anyone important will play and when. The Sixers were selective with appearances for Joel Embiid and Tobias Harris in the preseason last year, leaving Tyrese Maxey to do some heavy lifting in shorthanded groups. With Maxey a year further along and more important to their plans, it wouldn't be shocking to see Philadelphia protect most of their important players during the exhibition season, starting with the stars and moving down the line to veterans like P.J. Tucker.

The same logic applies to Brooklyn, obviously, and with Simmons coming off of an extended layoff from real basketball, getting him in a game against the Sixers and ripping the Band-Aid off in the preseason seems like the ideal scenario. But don't ask me to predict what might happen with Simmons, as that has been a futile exercise for quite a long time now.

(All of this assumes, obviously, that Simmons remains with Brooklyn. If a Kevin Durant deal goes down, the Nets can't trade for another player on a rookie max extension as long as Simmons is on the roster. The Durant trade front has been quiet, so it's a back burner issue for now, but something to monitor at the least.)

Teams in all sports have driven home how little they value the preseason in recent years, most prominently in football, where some key players barely play or sit out of the festivities altogether to protect their bodies for the real games. You would presume the Sixers will be cautious as most teams are, though I'll be interested to see if they try to accelerate their chemistry building before the real games begin. They were able to get important reps in to close last season, and there's continuity between Harden and the former Rockets guys, but every little bit adds up. Competition at the top of the Eastern Conference should be stiff yet again this season, and getting off to a fast start will be critical to compete for one of the top seeds in the East.

Outside of the Brooklyn matchup, you'll get to see the Sixers against some teams with young and exciting talent, though admittedly it won't do much to stress test Philadelphia's roster construction. Two dates against the big-heavy Cavs won't do much to prove whether Tucker and Harris are a viable forward combo — one of the main concerns for a lot of fans heading into the season — and the Hornets are still in limbo (contract and otherwise) with Miles Bridges, who faces three felony domestic violence charges stemming from an arrest this summer. I wouldn't expect a lot of regulars to play big minutes or possibly at all in that preseason finale, so get ready for a whole lot of Jaden Springer and Charles Bassey.

Televised basketball, if you can believe it, is only a couple of months away. Sustain yourselves on preseason football (yuck) and regular season baseball in the meantime.