Eytan Shander: What will the Eagles, Flyers, Phillies and Sixers look like in five years? 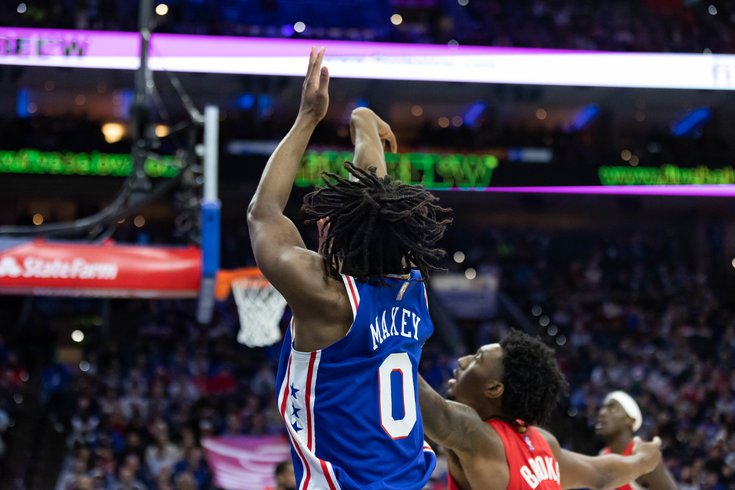 Tyrese Maxey shoots the ball during the Sixers' game against the Raptors at the Wells Fargo Center on March 20.

Teddy Shander would like to know as he – like many others – is about to embark on a lifetime of Philadelphia sports fandom. Teddy turned 1 on Wednesday of this week, thanks mostly to his mother (the MVP of the house), and it got me thinking about what he will grow into over the next five years.

He will go to plenty of games and wear plenty of jerseys, shirsies, and anything else. There will be Chase Utley and Jimmy Rollins hand-me-downs, and an old Donovan McNabb jersey, but this is about the future. Something that also coincides with where we all are right now, as fans of the same teams. Things have drastically changed since Teddy has arrived in the world, and many things will face that same level of change sooner than later.

I must give a public thank you on the week of Teddy’s first birthday to the Philadelphia 76ers front office and marketing department. They sent out a glorious “welcome to the world” basket a year ago, one that had his first and only jersey, Joel Embiid.

He’s worn it every single Sixers game we can watch – he’s only 1 for goodness sakes – and will be subjected to plenty more in his early lifetime. Instead of bouncing around from team to team, it’s better to look at what are and aren’t staples over the next five years. It’s more a matter of what he’s growing into, what your son or daughter will also experience, and what we can prepare ourselves for as “sports” parents.

At 28 years old and on a long-term max deal, Embiid isn’t going anywhere. His NBA lifespan is defined by how long his body holds up from wear and tear, but even then, he possesses enough skill to hang around for a couple of more years. That’s not my concern nor is it my son’s issue.

At that point in time, depending on what happens with the Sixers, Embiid may head to Miami or LA or anywhere warm. Hard to blame him if it’s climate driven. The next five years may be defined or helped shaped by what happens this off-season through the trade deadline. Daryl Morey needs to upgrade this team, which may mean parting ways with Tobias Harris and Matisse Thybulle. They are locked in with James Harden for the next couple of years likely on a short-term deal, so the Sixers immediate future is pretty set.

Teddy gets to grow up watching a generational player redefine the center position in an ever-evolving league, alongside one of the game’s greatest scorers – albeit in his twilight years. That’s the plus. The next three years are that, pending how these guys can hold up on the floor.

Everything else is finding the best pieces to fit around that puzzle as fast as humanly possible. That’s on Morey. You know the drill and have heard it before, “Time is running out for Embiid!!” Well… It’s hemorrhaging for Harden.

The second jersey that my son will wear will be Tyrese Maxey. This young man is a joy to watch blossom into one of the game’s bright young players. People can focus on how nice of a guy he is, but watching him attack people on the floor, with the ball or on the ball, is a thing of beauty.

Bryce Harper isn’t going anywhere. We all know that, and the Phillies have established some younger (than Bryce) talent around him. The issue with this team seems to be consistent with years prior, except they do have the ability to outhit errors – sometimes literal ones – in smaller parks.

I love the fact that Teddy gets to watch Harper grind out everything no matter the time of year, who is on the team, or the circumstances of the game. It’s way beyond any “Philadelphia mentality” or “Old School” approach.

It’s manifested every time he’s out there and that’s pretty damn cool to see. You may overlook or even downplay this as something that should be the norm, or a player just doing his job. That would be foolish at best.

Harper’s attitude, approach, and influence with the front office make up an eternal flame of hope that burns strong no matter the chaos around him. The sport deals with change, it’s in its nature, with guys getting called up and down, the constant ability to move a player over the season, even arbitration.

Will the team win a World Series over the next five years? Probably not, but I’d bet they get close. If I had odds on them making it to at least the NLCS, I’d lay a year or two of Teddy’s daycare on it. (If you told my wife about the opening MVP comment, feel free to leave out this one.)

Carter Hart is what the Flyers have been missing for decades but now that he’s here, so many other areas have fallen apart. We know Hart is sticking between the pipes for as long as possible, there are some other younger impact players that also have the chance to grow here. This is actually about a new voice, one that might not last the five years we are projecting here.

In fact, that’s a safer bet than the Phillies to the NLCS. Jon Tortorella doesn’t need to be here five years to turn around a franchise that wasn’t truly as bad as last year would indicate. Mainly because injuries compounded, and the team derailed. Think of what next year brings, so that by year three – when Teddy is actively going to Flyers games – he sees tangible change. The combination of a healthier team, the young staple in net, and a proven new voice add way more than excitement – it’s Ws in the standings.

This one is tricky and simple at the same time. The easiest person to factor in over the next five years, as a staple – or true impact player – is Devonta Smith. Part of that is because we don’t know the future of Jalen Hurts as the Philadelphia Eagles starting quarterback, the other part – most of it – is that Smith is already panning out to be one of the better receivers in the NFL.

Sky’s the limit for this young star to be, meaning it’s on the coaching staff to figure out how to maximize everything. AJ Brown should be another staple on this team, having those two younger players to grow with – be it a QB or young fan – is fantastic.

Nobody knows. The team doesn’t, which is actually the best thing for them as they have options to figure this out before the start of the following season. Until now, it’s on Hurts to convince more than his “haters” that he’s the man fit for the job long term. I believe my son will have a chance to watch a young core of Hurts, Smith, Brown, and Dallas Goedert grow into a menacing force. The good news for Teddy is that if somehow things do go sour for Hurts, young Teddy won’t be old enough to remember. As for now, we are rooting for Hurts in this household.

The last two things needed here are Jay Wright and the Philadelphia Union. My son grows up in this region knowing all of the major impacts Wright made on the game of basketball and the community. It’s a necessity that Teddy doesn’t see Wright as any footnote to championship talk, or any nonsense about Wright vs. (Fill in the blank Legend) coach. It’s vital that as the Villanova Basketball program grows out of the massive hole left by Wright’s absence, young fans like Teddy understand just why that crater was so massive.

Much like Wright – for different reasons and fans alike – the Union have made significant strides with both sports fans and the community. You may not see it or simply aren’t following the right people on Twitter, but the Union are constantly giving back to local communities and bringing awareness to social and economic issues.

They are also a fantastic team that’s endured some major hardships to get to the point of contention year in and year out, something that’s done wonders to grow the game in the region. Look at the celebration after Philadelphia was announced as a host city for the World Cup. The area has embraced the game, and the Union’s own turnaround on the field is a symbol of the overall change.

All of this to say, I’m buying my son a Maxey jersey.