The Sixers' turnover problem: What's the cause, and how do they fix it? 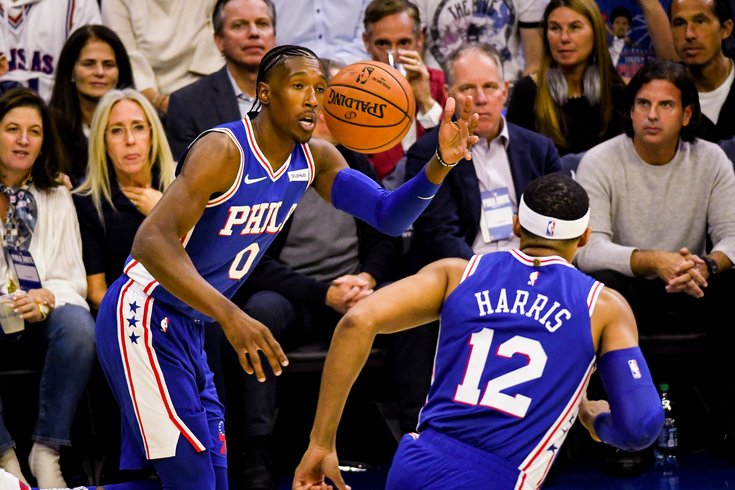 Tobias Harris (12) passes the ball to Josh Richardson (0) during the Philadelphia 76ers game against the Boston Celtics at the Wells Fargo Center in Philadelphia on October 23, 2019. (Kate Frese/PhillyVoice)

On a Sunday night in mid-November, the Sixers looked to be well on their way to a blowout victory of the Charlotte Hornets. Joel Embiid was rolling, both backup point guards were giving the Sixers valuable minutes, and Al Horford was doing Al Horford things.

And then came the turnovers. Not one, not two, not three, but 12 of them in the first half. When it was all said and done, the Hornets had ripped off a 26-6 run to close the first half, and they entered the second half up five on the home team. Undermanned and outgunned, Charlotte was nonetheless the frontrunner, and the Philly faithful showered the Sixers in boos as they hit the tunnel.

The Sixers would slow down that problem in the second half, but they would ultimately give the ball away 20 times before all was said and done, taking some of the joy out of an eight-point win. Though Brett Brown was in a jovial mood otherwise, he bristled when asked about the issue after the win.

"Until we can fix this, this is a house built on sand. It is fool's gold, and we have to find discipline and a better way to control that," Brown said following the win. "Because the turnovers in the first half, some of them were live ball, a lot of them we were just getting things batted out of our hands. We can't fool ourselves, this is a problem. This is a problem, and we need to own it. I'm the head coach, I got to find a way to fix it. And there needs to be a level of accountability with the players. That's that, and so it's not anything we take lightly. We don't dismiss it. "

The public fury over turnovers in Philadelphia has been sky high for years, and seeing it continue with a new iteration of the team is enough for some people to point the finger at one man, the head coach.

Under Brown, the Sixers have opted for a style of play predicated on sharing the ball and keeping everyone involved in the game, its roots growing from the San Antonio Spurs over the last decade-plus. In a league brimming with long-armed athletes, building an offensive style centered around constant ball movement comes with some drawbacks.

Brown has never been bashful about how he approaches coaching. His choice, he has said many times, is between coaching as the aggressor and coaching out of fear, which is not a choice at all. That applies across the board but also down to the granular level — Matisse Thybulle, for example, has been given a vocal green light by Brown to hunt steals and make use of his defensive talents.

There was a built-in excuse for the Sixers basically every year before this season. In the early "Process" years, they simply didn't have the talent. As Joel Embiid and Ben Simmons burst onto the scene, they were young and working through growing pains. Last season, they had several different iterations of the team in one year, creating chaos and uncertainty in a sport predicated on rhythm and trust.

The team is new this year, but this version of the Sixers has been set since July. They had informal player workouts in September, training camp together, plus preseason and the start of the regular season to get rolling. Brown knows the excuses are out the window for this group.

"The times are over where you're looking at some of the young guys and you can justify it, you can't do that anymore," Brown said Sunday. "It's time that we get better at that, and the players know it. They understand it, but we've got to fix it and that's how I see the turnover thing in general."

So what exactly is the role of the head coach in setting the tone on turnovers in today's NBA? The micromanaging, hot-headed coach of days gone by has faded from relevance in pretty much every sport, but especially in basketball in the age of player empowerment. Gregg Popovich has been known to call quick timeouts to let it rip on his players for miscues, but few coaches in the league have the cache to go that route.

And there are many more coaches out of work, a la Doug Collins, whose fear of turnovers was so strong that it kneecapped their offensive strategy before the players even took the floor. Consider that last year's Golden State Warriors, the league's No. 1 offensive team and in possession of perhaps the greatest group of elite talent in modern NBA history, turned the ball over 0.6 times fewer per game than the Sixers last year. Protecting the basketball cannot come at the cost of playing timid basketball.

Against Charlotte on Sunday, Tobias Harris had a particularly tough time taking care of the basketball. He picked up four turnovers on his own to "lead" the team, and he is turning the ball over more this season than he has during any year of his NBA career.

But to chalk that up to the Sixers' style of play, frankly, would be a mistake. Travels, which have been a point of emphasis for the league to begin the year, have been a big part of the problem for Harris, who is frequently trying to get a jump on his man when attacking as a face-up player. And then there are plays like this one, where he gets the isolation matchup he wants in the post, only to shuffle his feet and give the ball up.

It's cases like these where I think it's especially hard to play the "Brown needs to put his foot down!" card. If you reach the point where you are chiding one of your best and most expensive players for shuffling his feet on the block, you're treating a $180 million player like a CYO-league player. In the long run, it's not a winning move, and the point has been made clear to the players that this can't continue.

"[Turnovers have] been our biggest thing this year," Harris said on Sunday. "We're continuing to find each other in our spots and how we want to play, and things we can do to execute better. If we can limit it to half of those and protect the ball a little bit better, I think that will help us out a whole lot."

Now here's where I think the coaching influence matters. Philadelphia wants to play with pace, an understandable decision for a team that is often challenged for spacing and scoring in the halfcourt. But there are times when their desire to get out and run comes at the cost of some avoidable mistakes. This pass from Harris, for example, simply cannot happen, but it feels familiar for people who have watched the team play over the years:

The Sixers don't need to play in slow motion but they can certainly master tempo better than they have, especially with guards seeing increased minutes in recent weeks.

There's also the small matter of two of their best players being the two biggest culprits in the turnover department. Ben Simmons and Joel Embiid are each averaging at least 3.5 turnovers per game, and those issues are predictable to a certain extent. Teams are going to play the pass with the knowledge that Simmons doesn't want to shoot, and they will send help at Embiid knowing he still doesn't manage double teams well.

Dealing with the first problem is its own can of worms, but I would point to play style choices with the second problem. When Embiid just tries to pound teams into submission on the low block, turnovers can't help but happen. The Sixers need to make it a point to minimize Embiid's dribbling as much as they can, utilizing him more as a face-up weapon and roll man.

Embiid has never been particularly jazzed up about being the pick-and-roll target man, and when your primary ballhandler is a non-shooter, it makes running those sets a somewhat pointless exercise. But it can and should be a staple play for backup units, and the Sixers showed that off at times on Sunday night.

To be clear, this doesn't mean Embiid or even the ballhandler in the pick-and-roll should suddenly be expected to score gobs of points out of the set. But it is the league's staple play because it creates a numbers advantage somewhere. If you fear the roller too much, a shooter is open. Hug the shooters, and there's a lane to the basket for one of the guys involved in the action.

The Sixers are still lagging behind the rest of the league when it comes to pick-and-roll frequency but layered on top of the benefits for Embiid and Co., recent contributions from Raul Neto and Trey Burke should prompt an uptick. The Sixers have more pick-and-roll capable players than they've had since Brown took the job years ago, and that requires adjusting.

There is a happy medium between playing free-flowing basketball and minimizing the damage the Sixers do to themselves, but it's up to the coaching staff and the players to come together in order to make that happen.