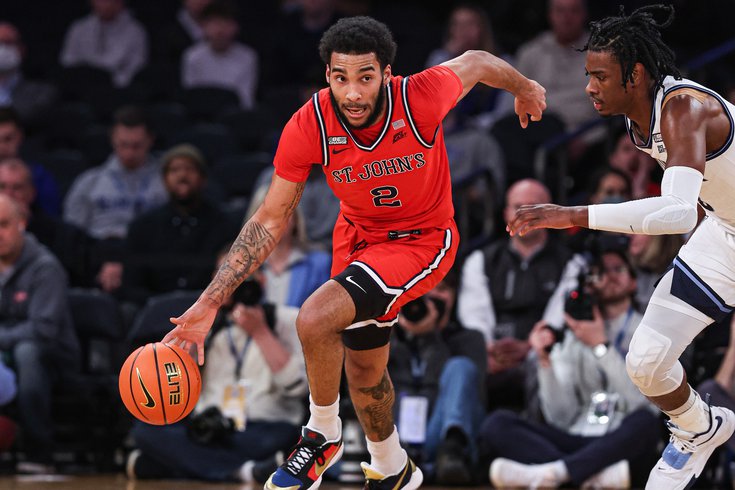 If you recognize his name and aren't a frequent watcher of the Big East, it may be because his brother, Justin, is already in the league playing for the Raptors on a two-way deal of his own. There were/are a lot of neighbors to the north upset that these brothers were not reunited in Toronto. Tough break, kiddos. Guess we'll have to wait for the first pair of siblings on two-way contracts for the same team.

Standing at 6'8" with a 6'10" wingspan, Champagnie looks the part of an NBA wing and has at least one skill that suggests he might be able to stick in the league. Stop me if you've heard this about a lot of guys during the 2022 draft process: Champagnie is a tough shotmaker, and he was forced to take a heck of a lot of those shots playing at St. John's. To put it into perspective: 73 percent of his catch-and-shoot opportunities during his final season in college were guarded, an uncommonly high number.

That goes part of the way toward explaining why his shooting numbers don't match his reputation as a shotmaker. After a sophomore season where he made 38 percent of his three-point attempts on high volume, Champagnie came back down to Earth this past season, making only 33.7 percent of his 6.2 attempts per game. Some of that is a product of his own self-selection, but teams obviously respected him enough to close out on his shot even with Champagnie tailing off during his final year in school.

A wing-sized player who can shoot as an undrafted free agent. Surely, I can hear you asking, there must be a catch.

Champagnie's athleticism is likely to hold him back at the next level on both ends, even though he was a productive two-way guy in college. Smaller, quicker players will give him problems in space, and it's an open question whether he will have the strength to continue winning with a physical brand of defense at the next level. And that's before getting to where physical concerns could slow him down on the other end — without the burst to separate against NBA-level athletes, Champagnie will have to live on a steady diet of well-contested looks, and it's a hard way to make a living even at his size. He's not a very inspiring playmaker, and he was forced to settle for jumpers as a result of his inability to get to the rim fairly often in college. That's only going to get tougher in the pros, even with better spacing and teammates.

That said, he was a useful defender at the amateur level and has the size to defend at least two positions. He may not be able to size down and help with many (if any) guards, but he's big enough to handle forwards, shows strength on the low block, and has shown the ability to disrupt possessions as a weakside shot blocker and a thief in passing lanes. Assuming at least some of that holds, there's a decent base to build up from.

He is the exact sort of player that is worth a flier on that they should continue to churn through with the pillars they have in place. There's potential for a three-and-D guy there, and if he doesn't reach it, you can go searching for another. Of the available undrafted options from this class, Champagnie brings some intrigue.

Two additional notes to pass on within this story: Shams Charania reported early Friday that Michael Foster of the G League Ignite agreed to a "free agent deal" with the Sixers. Chris Haynes over at Yahoo also reports that the Sixers will sign Georgetown's Aminu Mohammed to an Exhibit 10 deal.