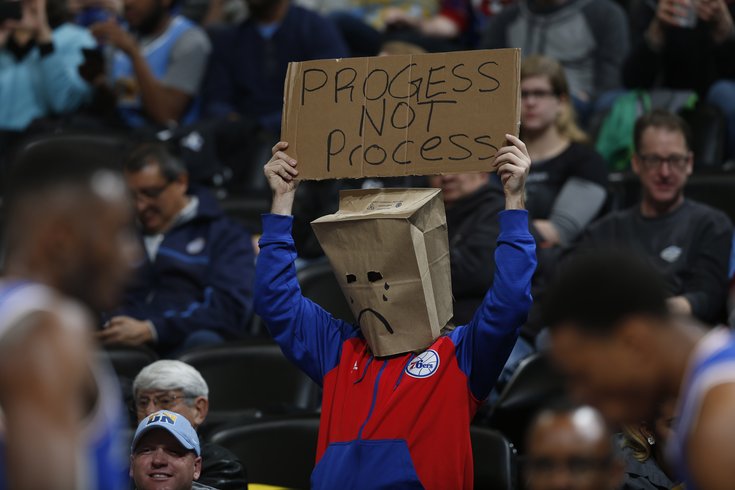 The Sixers won 19 games in Sam Hinkie's first season as GM and 18 in his second. This year, they might not even make it to double digits.

As the clock ticks closer to midnight of the NBA season, the Philadelphia 76ers are 9-66 and still in search of their 10th win of the season. They're one loss from the securing the worst record in the league, but in a season full of losses, they'll need to squeak out one more win to avoid tying the 1972-73 Sixers with the most losses in an NBA season (9-73).

And while one win seems simple enough, Brett Brown's team hasn't won a game since March 11 and is just 1-23 since February 8th. The Sixers' last win over a team not named the Brooklyn Nets was over the Phoenix Suns on January 26th.

The good news for the Sixers is that only three of the seven teams on their remaining schedule are current playoff teams. Furthermore, they have three home games against non-playoff teams.

The bad news is this: In 17 games this season against the teams remaining on their schedule, the Sixers are a whopping 0-17 and have been outscored nearly 15 points per game in those games. They've also played a majority of those games with Jahlil Okafor, who won't be playing the rest of the season.

In their 15-point loss to the Hornets on Tuesday night, the Sixers were not only without Okafor, but they were also missing three forwards -- two of them starters -- in Nerlens Noel (knee), Jerami Grant (knee, quad) and Richaun Holmes (Achillies). As a result, they set a new franchise record for three-point attempts (44) and tied the record for most three-pointers made (16).

The Sixers are going to need to pull off an upset in order to avoid a 73-loss season; they'll be the underdog in each of their remaining games, starting with Friday's rematch against the Hornets in Charlotte.

Here's a look at their remaining schedule, and which game(s) will be the Sixers' best chance to pick up win No. 10:

If Noel and Grant sit again -- there's no reason to rush them back this late in a lost season -- the Sixers don't really stand a chance in this one. Sure, they'll be well-rested after having two days off before heading to Charlotte, but so do the Hornets. That also means that Jeremy Lin, who averages 11.7 points per game and sat out Tuesday night, will return to the lineup.

The Sixers will be playing on the second night of a back-to-back against a Pacers team that is trying to hold off the Bulls for the eighth and final Eastern Conference playoff spot. In their last meeting against Indiana, the Pacers held the Sixers to just 75 points, their third fewest in a game this season.

If the Sixers are indeed going to get a win again this season, it's probably going to be in one of these next three games. The Pelicans actually present, in my opinion, the best opportunity for the Sixers to pick up their 10th win. Anthony Davis, Jrue Holiday and Ryan Anderson combined to torch the Sixers for 84 points in their only meeting this season -- a 121-114 Pelicans win -- back on February 19th. This time around, however, all three of those players will be out with injury and New Orleans is just 4-12 in its last 16 games. It's also another chance for Ish Smith to get some revenge on his former team.

The Sixers may be 0-3 against the Knicks this season, but they've kept it relatively close in all three meetings this season -- the largest margin of defeat was 12 points. The last time they met, which was all the way back in mid-January, required two overtimes to decide.

The Sixers have yet to play the Bucks at the Wells Fargo Center this season. Still, they were able to keep it close in both meetings and given the fact that Milwaukee has lost five straight games, including their most-recent 25-point loss to the Hornets, they seem like a team from which the Sixers could steal one.

The Sixers' odds to win these last two games could be more a product of circumstance than anything else. Currently, the Raptors have a firm grasp on the No. 2 seed in the East; they're two and half games behind the Cavaliers and five games ahead of the third-place Hawks. There's a chance that Toronto enters this game locked into that second position, and could choose to limit the starters' minutes. If that happens, the Sixers' chances in this one could balloon to something that resembles their matchup with the Bucks, but it's still too early to tell. Of course, the opposite could happen, with the Raptors making a late push to catch the Cavs or needing a win in order to hold off the Hawks. And if that happens, you can all but forget about the possibility of a Sixers win.

Like the Raptors game, the outcome of this one largely depends on whether or not the Bulls are still in contention for the playoffs. If so, a Sixers win seemed highly unlikely. But the Bulls will have their work cut out for them, given the fact that they're two games behind the Pacers -- whom they beat 98-86 on Tuesday night -- with just eight games left, including five against current playoff teams (@HOU, DET, MEM, MIA, CLE).

Now compare that to the Pacers' remaining schedule. They play just a pair of playoff teams (CLE, @TOR) and their other six games are against the five worst Eastern Conference teams (ORL, @PHI, @NYY, BKN, NYY, @MIL). If things play out as one would expect, the Pacers should clinch the eight seed before the Bulls and Sixers meet. That would certainly help the Sixers chances at picking up a win.