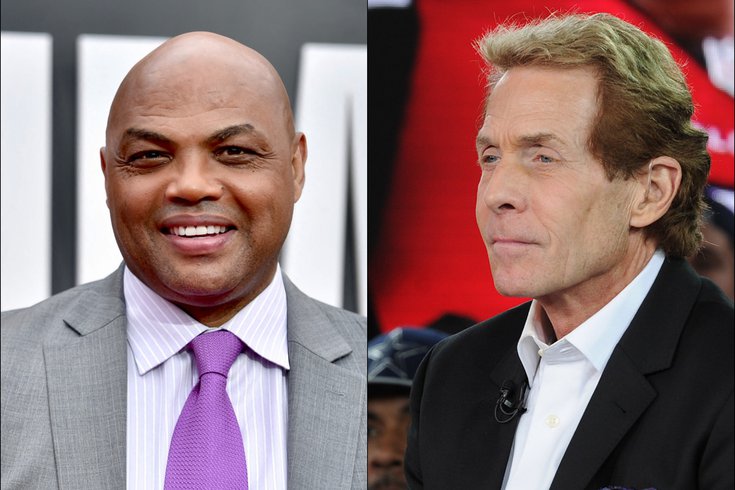 Charles Barkley has ragged on FS1 host Skip Bayless for years, often making remarks that he would like to 'kill' Bayless. The 'Undisputed' host opened up on his podcast about how those comments have affected him and his family.

NBA Hall of Famer and former Sixers star Charles Barkley is nothing if not one of the greatest trash talkers on television, mixing blustery humor with blunt criticism to address topics that often transcend sports.

Barkley is the type of jovial grouch whose commentary usually earns him the benefit of the doubt. Coming within a hair of crossing the lines of acceptability is part of what he does best, and since Barkley mixes in plenty of self-deprecation – whether it's about his weight or his old-man-yells-at-cloud persona – he mostly manages to be an endearing bully. It all comes across as charming because it's for show. And when Barkley gets foot-in-mouth syndrome, he has to deal with it not being a joke anymore.

Over the years, Barkley has made no secret of his distaste for current FS1 and former ESPN host Skip Bayless, his least favorite sports analyst in the business.

"You know what we should do for ratings?" Barkley mused during a 2017 appearance on "The Dan Patrick Show." "If I get a disease and I’m gonna die, how about you get Skip Bayless in here and I’ll kill him live on national television?”

This is one of a handful of remarks Barkley has made about wanting to kill Bayless, the 70-year-old sportswriter-turned-hot-take-artist, who has helped define the major network model that turns sports coverage into a soap-opera goldmine.

Last year, during an NBA on TNT segment, Barkley again joked about beating Bayless to a pulp.

There's a video on YouTube that includes five full minutes of comments Barkley has made about disliking or wanting to kill Bayless.

From "First Take" to "Undisputed," Bayless has mostly fallen on the sword of constant criticism in exchange for being a highly paid reactionary in the sports world. His pedigree as a writer during the Dallas Cowboys and Chicago Bulls glory days has always been the conceit of his crossover entertainment act on television, where he cultivates petty grudges against superstar athletes and makes no pretense about his biases. Much like Barkley, Bayless does this for show, but he doesn't quite have the effortless charisma and former-player cache that Barkley does.

On Monday, Bayless dedicated an episode of his podcast to discussing Barkley's hatred for him and the impact it has had on his personal life.

"For about 15 years, on all kinds of national TV platforms, Charles Barkley has regularly and relentlessly said he would like to – and I quote – 'kill' me," Bayless said. "Again and again and again, Charles has said he would like to kill me. And Charles Barkley has not been joking when he has said this. He says it like he means it, like he would very much like to end my life."

Bayless dug up numerous examples, including old appearances the NBA great made on late night shows with David Letterman and Jay Leno. He recalled a particularly grotesque threat during a 2013 episode of "Inside the NBA," the postgame show for the "NBA on TNT" crew.

"If I could get Skip Bayless in a room, you'd need DNA to find out who he was," Barkley said.

Bayless said he doesn't know Charles Barkley and has never had a single conversation with him, despite attempts to get Barkley to join him on TV. If Barkley dislikes him because of the things he says on TV, Bayless claims that doesn't bother him at all. The problem for Bayless is that the comments have frightened his wife.

"My wife, Ernestine, has believed for 15 years that Charles Barkley is nothing but a sick individual. To her, he is just pure evil. That he is depraved, that he is a scumbag," Bayless said. "She fears that one day Charles will somehow, maybe unwittingly, or maybe wittingly, inspire some other nut to end my life. And this haunts her. This hurts her because she believes that in the end, Charles Barkley would have my blood on his hands."

At one point, the situation got so uncomfortable that Bayless went through back channels at ESPN to contact Barkley's boss at Turner Sports. He hoped someone might be able to back Barkley off the homicidal rhetoric. It didn't work, and Barkley appeared to take glee in further escalating the situation.

“I said look, I don’t care about any of the other criticism,” Bayless recalled of his conversations with industry friends who could reach Barkley. “He can rip, he can slash, he can say whatever he wants. Just for Ernestine’s sake could he please stop using the k-word, please no more kill.”

"He has hurt my wife deeply," Bayless added. "She has lost much sleep over this."

Bayless explained that he decided to discuss this issue publicly after Barkley again brought him up during a recent appearance on the podcast of Golden State Warriors star Draymond Green. The two guys have a chippy history of their own.

"I hate Skip Bayless more than life," Barkley told Green. "Skip Bayless hates LeBron (James) and Aaron Rodgers. I hate that, because the one thing I'm going to try to do is I'm never going to lie on television. Because people believe what they see on television."

At the root of Barkley's hatred for Bayless is disapproval of the sports talk format in which Bayless thrives. Though Barkley has said he's got no problem with Bayless' partner, NFL Hall of Famer Shannon Sharpe, he takes issue with the way Bayless, a non-athlete, criticizes players.

It's a point of view that Bayless rejects, naturally, but doesn't seem to question why Barkley would single him out among all of the talking heads who have never played pro or even amateur sports.

In 2020, Bayless was rightly condemned for questioning the mental fortitude of Cowboys quarterback Dak Prescott, who had lost his brother to suicide. In that example, feeding sports controversy mattered more to Bayless than simply respecting that such a sensitive matter shouldn't have been used for entertainment, especially when the format of his genre of TV so often benefits from tragedy and public meltdowns, by design.

Has Charles Barkley been going too far with the comments about wanting to kill Skip Bayless? It's completely unnecessary and admittedly jarring when years of comments are lined up together, but it's also obvious that Barkley is just doing a bit, albeit a particularly hostile one with gory imagery. The idea that some deranged viewer is going to take it as inspiration to rid the world of a dastardly sports talk show host is more of a black comedy premise than reality.

In fact, Bayless acknowledged that Barkley's comments have probably helped his visibility. Their frequency suggests that Barkley hate-watches Bayless the same way many viewers do. That's nobody's fault but their own.

“The more I’ve read about what Charles says about me, the more I realize that he watches ‘Undisputed’ religiously, and I appreciate that greatly,” Bayless said. “Over the last 15 years, I can make the case that Charles Barkley has been my No. 1 viewer. I just don’t think any other human has watched me as closely as Charles Wade Barkley has. I love him for that.”

Once again, Bayless is inviting Barkley to join him on "Undisputed" or on his podcast to discuss their differences. It's a transparently self-serving move – Skip's instigating energy is too overbearing to feel pure sympathy with him in this – but Barkley should really just shut up and do it already.

A conversation between Barkley and Bayless might open up an insightful conversation about the purpose and parameters of sports media. That assumes the two of them are up for engaging in legitimate debate alongside whatever sniping they feel is necessary to play up the occasion, of course. Going on "Undisputed" may not be the appropriate venue, but the podcast would work.

If Barkley isn't willing to use his intellect to deal with Bayless after 15 years of ridiculing him just for fun, then he should either drop it at this point or find some new, creative ways to roast him. The NBA world has plenty of raptors, timberwolves, bulls, grizzlies and other mascot figures who could metaphorically be invoked to do the bidding of Chuck's fantasies in a less threatening way.