In South Jersey town, when sun falls, the stink rises

'It's so bad outside my house right now. I swear it's every night here. Barf' 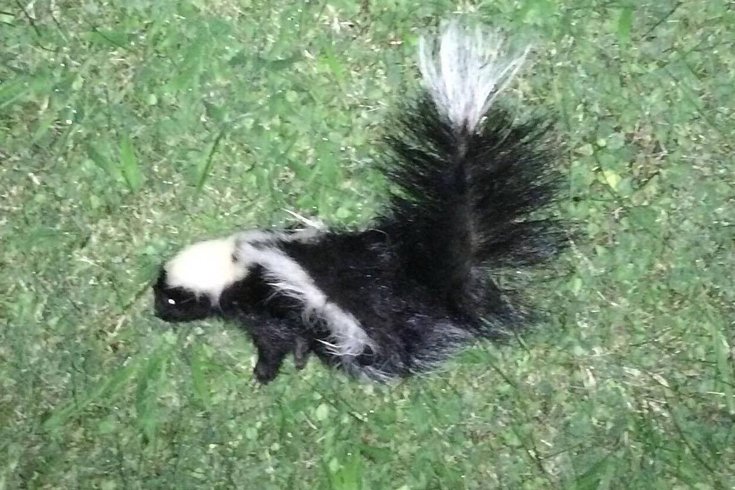 Maple Shade resident Amy Neugent Liedel took this picture of a skunk in her yard recently.

The South Jersey suburb of Maple Shade stinks some nights.

It's not odor from a refinery or a landfill.

The critters can shoot their sulfuric spray more than 10 feet. But it can be detected by the olfactory sense more than three miles away. And the nauseating scent lingers. And lingers.

According to residents in the Burlington County township of 19,000, the suburb has had a large population of skunks for years, but there just seem to be more this summer.

And they are routinely spraying, nailing neighborhoods and dogs and forcing homeowners to keep their windows closed.

Amy Neugent Liedel, a longtime resident whose dog tangled with a skunk recently, told PhillyVoice, “I’m not sure why there are more. We’ve had them for years, but it definitely seems we smell them more often.”

Another resident told PhillyVoice, “It gets a little smelly at night, but the skunks aren’t causing me or my property any harm.”

While the odor is annoying, the more serious issue is that skunks are often carriers of rabies.

The issue of skunks in the township prompted a thread on Facebook with more than 50 replies.

• “Ugh, my dog got sprayed Thursday night under my deck and it still stinks ! Actually considering dumping tomato juice in the yard!” one Facebook poster wrote.

• Another wrote: “I always smell skunks around me. I have to go out with my dog now every night. We've had skunks, a fox, goats and the usual critters. It's like a wildlife refuge back there.”

• “It's horrible, especially in the morning!’ posted a woman.

• “We have smelled them off and on all summer, and definitely more so than previous years. They are really making themselves at home in the neighborhood!” added another.

• “It's so bad outside my house right now. I swear it's every night here. Barf,” chimed in yet another.

Several posters mentioned similar skunk issues in Pennsauken and Merchantville, both nearby, but in Camden County.

Pennsauken resident Pat Michan Mellon told PhillyVoice that "skunks are keeping us prisoners in our own homes after dark. Smells are ungodly. Something needs to be done."

Joseph Andl, the township manager in Maple Shade, said he’s sniffed the skunks at night several times this summer, but hasn't taken any complaints from residents.

He said creek beds through the township provide protected corridors for the nocturnal skunks to move about at night.

New Jersey Animal Control LLC., which has the contract for dealing with animal pests in Maple Shade, did not respond to a request for comment.

Under state law, problem skunks can be removed and relocated – but not far – or be euthanized.

Because they can carry rabies, relocation can only be done in the town where the animal is trapped and no farther than five miles from where captured. As a result, many are euthanized.