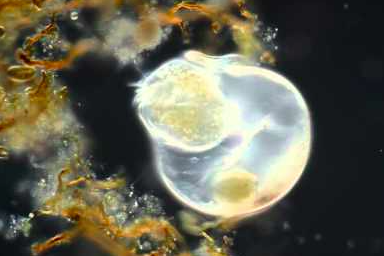 Ciliate devours one of its kind in Wim van Egmond's first place submission for Nikon's 2015 Small World in Motion Competition.

In 1975, Japanese optics and imaging company Nikon launched its first International Small World Competition, which called on the world's leading photographers and photomicrographers to submit the most compelling examples of science at work on the smallest scale.

Over the next 40 years, as imaging technology advanced leaps and bounds, the limits of this challenge became increasingly approachable as scientists across multiple disciplines strived to capture beauty while learning more about the nature of their respective fields. In 2011, Nikon opened up the competition to movies made with light microscopes, which use visible light and lenses to magnify tiny specimens.

In its current form, the results of the Small World in Motion Competition have been breathtaking, to say the least. Take, for example, the second place winner from 2014, a video from Dr. Douglas Clark that shows the crystallization of caffeine using polarized light.

This year's winners took another step further into the teeming realms of life and matter we can't observe with the naked eye. Taking first place, Wim van Egmond of the Micropolitan Museum in the Netherlands filmed a video in a friend's backyard pond that shows a ciliate devouring another ciliate. These are tiny, single-cell organisms covered in hair-like structures, to put the dimensions of this in perspective.

“Wildlife is so close to us, yet most of us never look close enough to see it,” van Egmond told Newsweek. “A pool in your garden is actually a miniature underwater jungle teeming with life. If you want to see the world, your backyard is a great place to start.”

The rest of the winners, as well as an archive of past competitions, can be found here. Below is a montage Nikon put together including all of this year's winning clips and several others that received an honorable mention.