Former Sixer can't keep up with the action 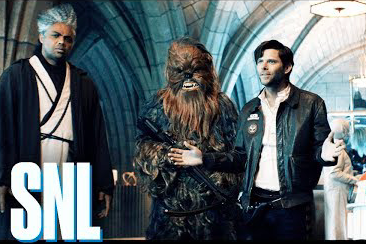 The great Charles Barkley hosted "Saturday Night Live" for the fourth time this past weekend, weighing in on everything from the "shut up and dribble debate" to the national battle over gun reform.

Barkley has been on a roll lately. A few weeks back, he joined "Jimmy Kimmel Live!" and admitted he once played a game for the Sixers while blackout drunk.

Some "SNL" skits are bound to wind up on the cutting room floor. It goes with the territory on such a jam-packed show. That's what happened to this silly "Star Wars" sketch, but at least "SNL" had the good sense to release it online.

Barkley is a part of "The Mos Eisley Five," a group of rebels who want to strike a deal with "Goba" (a Jaba the Hutt on SlimFast) to free their pilot and get out of Mos Eisley, that wretched hive of scum and villainy.