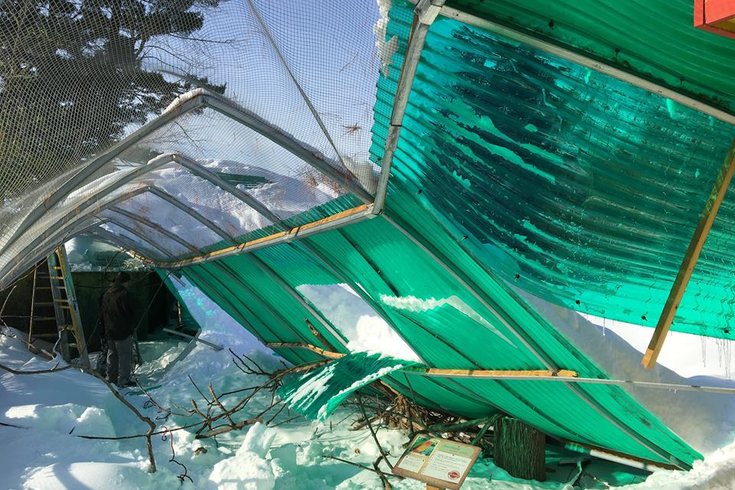 Heavy snowfall caused the collapse of the Birds of Paradise exhibit at the Elmwood Park Zoo Saturday night.

The heavy snow that slammed the Philadelphia region over the weekend caused an exhibit at a Norristown zoo to collapse.

The Elmwood Park Zoo said on its Facebook page Monday that the Birds of Paradise exhibit buckled under the weight of the snow Saturday night.

Luckily, none of the birds or zoo staff were harmed as a result of the collapse as the exhibit is closed during the winter months, the park said in a press release.

Zoo spokesperson Shaun Rodgers told CBSPhilly that it will take a decent amount of time to repair the exhibit:

“I think what will happen now is we’ll take a look at this structure and how it was built originally, and maybe think of different ways to do it so we can avoid this sort of problem in the future.”

The zoo will remain closed but is expected to reopen later in the week. A video from FOX29 showed maintenance crews already working on repairing the exhibit Monday.

Anyone wishing to donate to the zoo's efforts to battle the winter weather can visit http://www.elmwoodparkzoo.org/event/232.