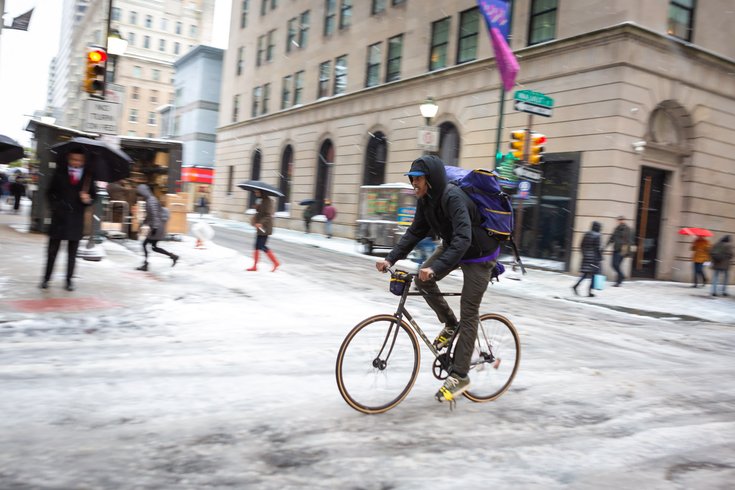 A bicycle courier rides through the snow along Walnut Street, Thursday, Nov. 15, 2018.

It's snowing across much of the region but it won't last as long as the current cold spell.

Light flurries arrived in Center City Philadelphia about 10:30 a.m. – a bit later than anticipated – and gradually intensified. A winter weather advisory for the entire region is in effect until 3 p.m. Thursday and forecasters warned that roads could get slippery for the evening commute. Indeed, by early afternoon the snow was laying on streets and sidewalks in many northern and western suburbs.

Some area districts already have let out early to get schoolchildren home the snow gradually changes over to sleet and/or rain this afternoon as easterly winds bring in mild air. Rain may be heavy at times into Thursday night, forecasters said.

Both Temple and Drexel universities canceled all classes beginning at 3:30 p.m., they announced on Twitter. 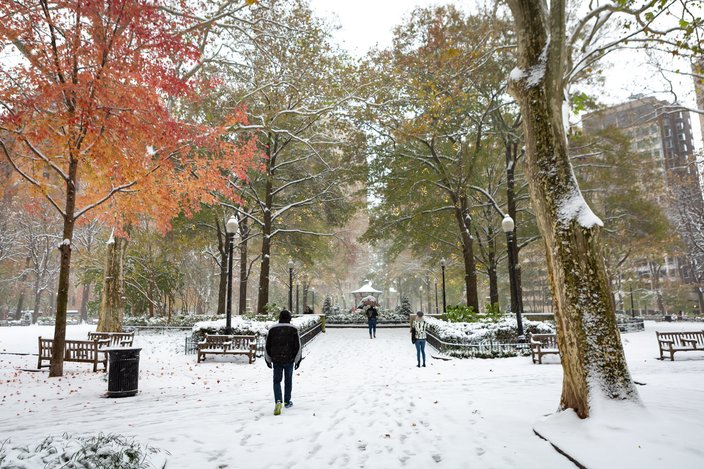 Snow blanketed the ground of Rittenhouse Square while colorful leaves clung to the trees above, Thursday, Nov. 15, 2018.

The snow is affecting travel.

PATCO has suspended all service – and is holding trains at stations – to operate its ice train around Ferry Avenue Station. Weather-related equipment issues at the station were causing significant significant westbound and eastbound delays.

Trains are running at up to 15-minute delays on SEPTA's Regional Rail due to weather conditions. 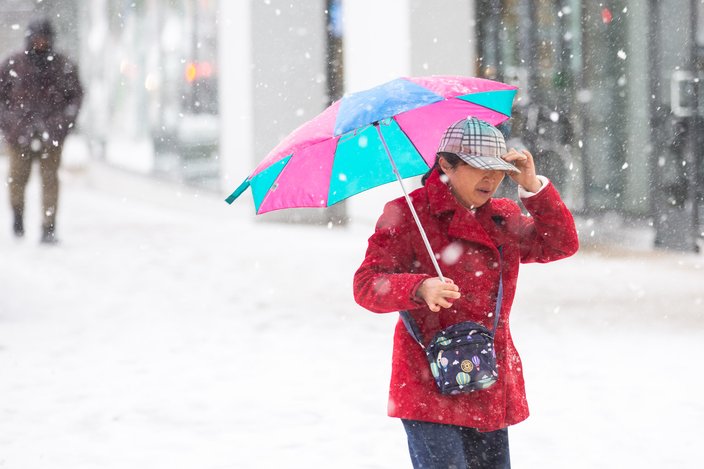 Speed restrictions are in effect on the Pennsylvania Turnpike, from the Downingtown exit (312) west to the Donegal Exit (91), according to PennDOT.


At Philadelphia International Airport, where snow, freezing fog and a temperature of 30 degrees was reported at 12:50 p.m., officials warned that some flights were canceled and delayed. They advised checking with your airline. PHL also said some carriers are offering fee waivers to change itineraries to and from certain cities on certain dates. 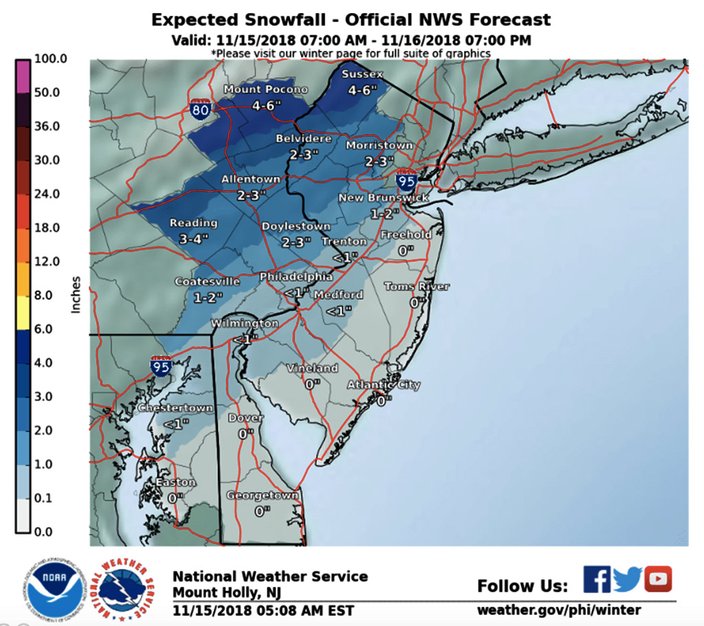 From Saturday to Wednesday, it will remain cold, with another cold front reaching the region late Monday. Light snow and rain showers are possible ahead of that cold front from Sunday into Monday, forecasters said. High pressure should return for the middle of the week.

Today: Rain, snow, and sleet before 3 p.m., then rain and snow between 3 and 4 p.m., then rain after. High near 36. Northeast wind 10 to 13 mph, with gusts as high as 26 mph. Chance of precipitation is 100 percent. Total daytime snow and sleet accumulation of less than a half inch possible. 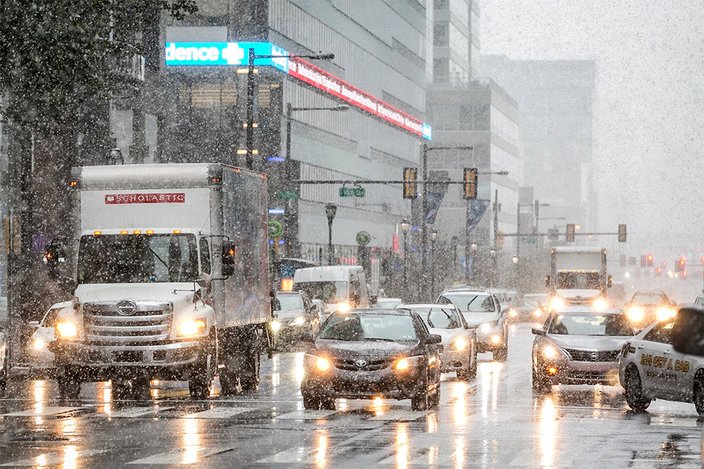 Traffic moves slowly along Market Street late Thursday morning during the first snowfall of the season for the region.

Tonight: Rain. Temperature rising to around 42 by 2 a.m. Breezy, with a northeast wind 14 to 21 mph. Chance of precipitation is 100 percent. New precipitation amounts between a half and three quarters of an inch possible.


Friday: Rain and snow likely before 9 a.m., then a slight chance of rain through 11 a.m. Cloudy, then gradually becoming mostly sunny, with a high near 45. Breezy, with a west wind 17 to 21 mph, with gusts as high as 32 mph. Chance of precipitation is 60 percent. Little or no snow accumulation expected. 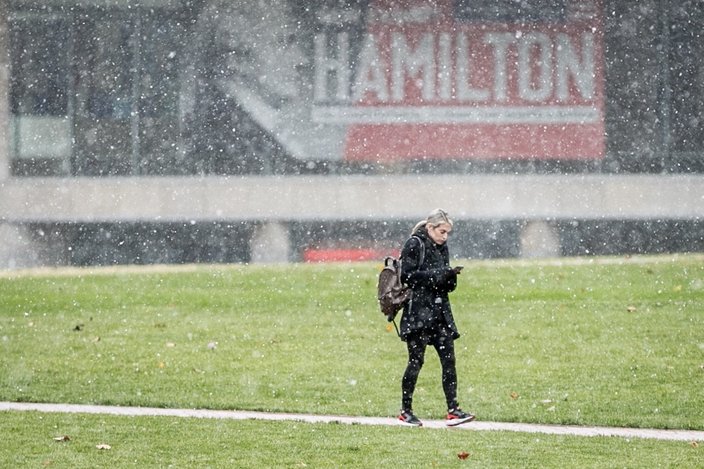 A woman walks across Independence Mall near the U.S. Constitution Center during Thursday morning’s snowfall.

Saturday: Sunny, with a high near 48. West wind around 7 mph.

Saturday night: Partly cloudy, with a low around 34.

Sunday: Partly sunny, with a high near 46.

Sunday night: Mostly cloudy, with a low around 35.

Monday: Partly sunny, with a high near 49.

Monday night: Mostly clear, with a low around 31.

Tuesday night: Partly cloudy, with a low around 30.

Wednesday: Mostly sunny, with a high near 44. 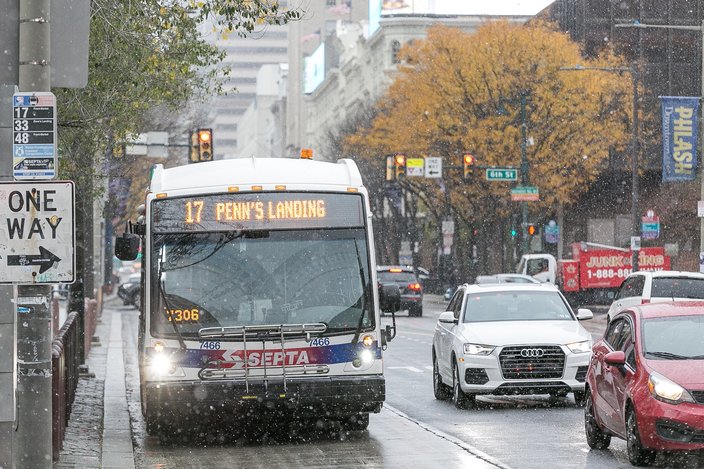 An eastbound Route 17 SEPTA bus arrives at 5th and Market streets in Old City as snow falls in Philadelphia on Thursday morning.