Add these Tweeters, Facebookers and Instagrammers to your feed 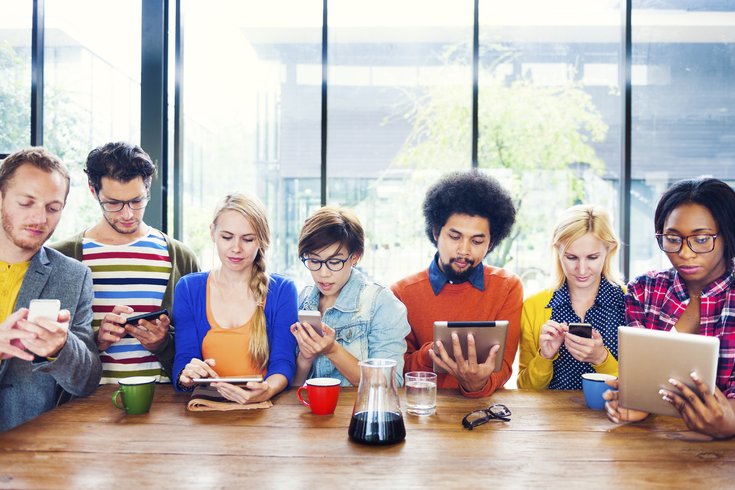 Crafting the perfect tweet, curating a cohesive Instagram account or fostering a legion of Facebook followers is no easy feat. Maintaining an engaging social media presence takes a lot of work, but its benefits - think making professional connections or meeting new friends - make it well worth it.

The following Philadelphians use their social media prowess to build relationships, discuss the latest news and make names for themselves. The list below isn't filled with Philly-bred celebrities either; it's full of real people using a hashtag or a "Like" to connect with their neighbors. Follow along, but be warned: Your newsfeed is about to get much more interesting.

Very cool to see Campo Santo and the Panic logo in a keynote slide.

Twitter: @gruber | Instagram: @gruber
Total followers: 380,723
Gruber is the writer and user interface designer behind tech blog Daring Fireball, where he discusses his take on industry news. (@DaringFireball itself has 76,820 followers.) The Drexel alum invented markup language Markdown, among other innovations, and hosts popular podcast "The Talk Show."
Follow for: Tech news and debate with a heavy dose of humor.

Twitter: @WhitneyMWS | Instagram: @whitneymws | Facebook: Mommies with Style
Total followers: 69,295
Philly suburbanite Wingerd began her blog Mommies with Style in 2004 when her son was just 10 months old. Over a decade later, the site is more family- and lifestyle-focused than baby-focused, with an extra oomph of fashion and travel content mixed in.
Follow for: Product reviews, giveaways and fashionable mom gear.

Twitter: @nealfredsantos | Instagram: @nealsantos | Facebook: Neal Santos Photography
Total followers: 21,407
You won't only find drool-worthy photos of local food on this photographer's accounts - though you will find plenty. Santos' Instagram is also speckled with fresh produce from Farm 51 farmstand, candid shots of Philly and snaps from his travels.
Follow for: Hunger-inducing shots from Philly's best restaurants.

Twitter: @DPBell | Instagram: @desireepeterkinbell | Facebook: Desiree Peterkin Bell
Total followers: 24,985
As the mayor's director of communications and city representative, Peterkin Bell leads the office's communication and strategy. Following her means getting a front-row seat to Michael Nutter's day and the city's most important events, with a hearty helping of passion for Philadelphia throughout.
Follow for: A behind-the-scenes look at Philly's biggest happenings.

A contractor on my house asked if I had a point person, implied husband, to take charge. I quickly told him #WhosTheBoss

Twitter: @BarbieMarshall | Instagram: @barbiemarshall | Facebook: Barbie Marshall
Total followers: 37,023
Chef Marshall is so well-known for her love of sustainable food that she's also known as "The Farming Chef." Ever since becoming a finalist on Season 10 of "Hell's Kitchen," Marshall has been busy giving demonstrations, cooking private dinners and speaking to rapt audiences about the industry.
Follow for: A blow-by-blow of today's menu and peeks into Marshall's travels.

Twitter: @iPhillyChitChat | Instagram: @PhillyChitChat | Facebook: Philly ChitChat
Total followers: 36,726
Philly's lone paparazzo, HughE Dillon is the eyes and ears of the city's social scene. Whether he's snapping away at a live event or curating his timeline for breaking news, he always knows what's going on.
Follow for: A little bit of everything.

Twitter: @PhillyFreezer | Instagram: @phillyfreeway | Facebook: Philadelphia Freeway
Total followers: 352,028
As a member of local group State Property alongside Beanie Sigel and Peedi Peedi and with new work on the way, Freeway is at the center of Philly's rap scene. Plus, he's the owner and face of Best Beard Cream, which has its own legion of epically well-groomed fans.
Follow for: Updates on his newest tracks and upcoming concerts.

Check out this awesome Minecraft project completed on a Chromebook by an #slabeeber student http://t.co/yH78vnN6MK #phled

Twitter: @mbteach | Instagram: @mbteach
Total followers: 27,013
With the Philadelphia education system in its current state, empowered, dedicated teachers like Science Leadership Academy's Mary Beth Hertz are an invaluable resource. Her feed is full of discussions on how education and tech intersect and signal boosts for important causes.
Follow for: Education news and a well-curated list of industry links.

I'm at the zoo with Roy Halladay?! pic.twitter.com/5453vwPKvo

Twitter: @ZooWithRoy | Facebook: I Want to Go to the Zoo With Roy Halladay
Total followers: 20,984
Anonymous sports blogger Zoo With Roy began his online adventures with one goal: going to the zoo with Roy Halladay. Well, it finally happened in August 2014, but that luckily hasn't stopped his beloved Phillies commentary or his zany tweets.
Follow for: Unfettered love for the Phillies & Halladay and irreverent comments on pop culture.