For some SEPTA riders, the storm proves a 'hassle' 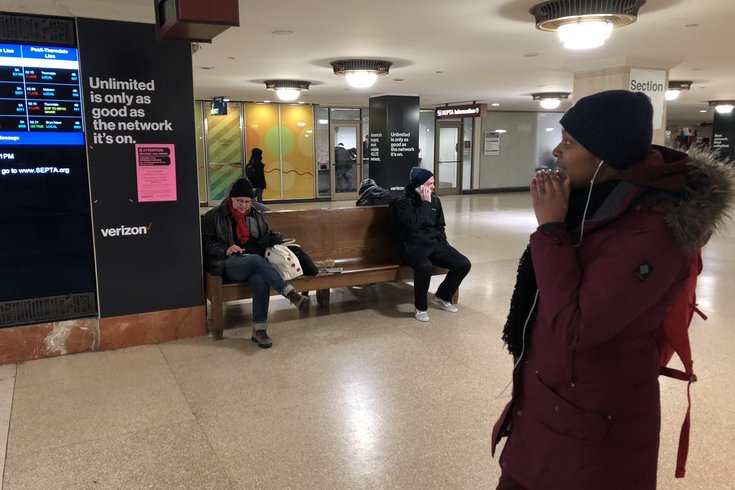 Markeeta Johnson, 26, of North Philly, checks the Regional Rail schedule at Suburban Station on Thursday, Jan. 4. Many trains were running late due to a winter storm that dropped several inches of snow throughout the Philadelphia region.

When Mickey Hayes reviewed his travel itinerary and checked the latest forecast Wednesday night from Orlando, he thought he'd be able to make it home to Bucks County relatively easily.

But by the time he reached Suburban Station early Thursday afternoon, Hayes had experienced quite a journey thanks, in part, to the snowstorm that rolled across the Northeast. And he still wasn't sure when he'd make the final 19 miles to his Churchville home.

The last several Regional Rail trains to Warminster had been canceled. Complicating the matter, he had left his car in Trenton, where he had flown via Frontier Airlines to Orlando for work.

His morning already had been an adventure.

His flight into Philadelphia had been diverted to Baltimore, where he sat for another 90 minutes. At one point, Hayes said, he considered renting a car and driving back to Bucks County. But he ultimately stuck it out.

And now he was waiting again, but this time for SEPTA.

Hayes was not the only one waiting for a train to Warminster. Dozens of other passengers stood by the gates, waiting to catch a train to the Bucks County station.

Mark Bosniak, 65, of Warminster, had left work early to catch a 1:05 p.m. train home. But he watched helplessly as the overhead screen continually flashed longer delays.

"It's a hassle," Bosniak said. "Right now, it says a 33-minute delay. I could have been back at my office doing work."

It marked a stark contrast from his morning commute. Bosniak, a lawyer, had caught a 5 a.m. train into Center City without any trouble.

"There's not a whole lot of accumulation," Bosniak said. "It's just a miserable day. I could be here for a while."

Minutes later, SEPTA announced it had canceled his 1:05 p.m. train – the second cancellation on the Warminster Line. Joan Jennerjahn had been there when SEPTA aborted the 12:05 train. Now, she was being forced to wait another hour for the 2:05 departure. 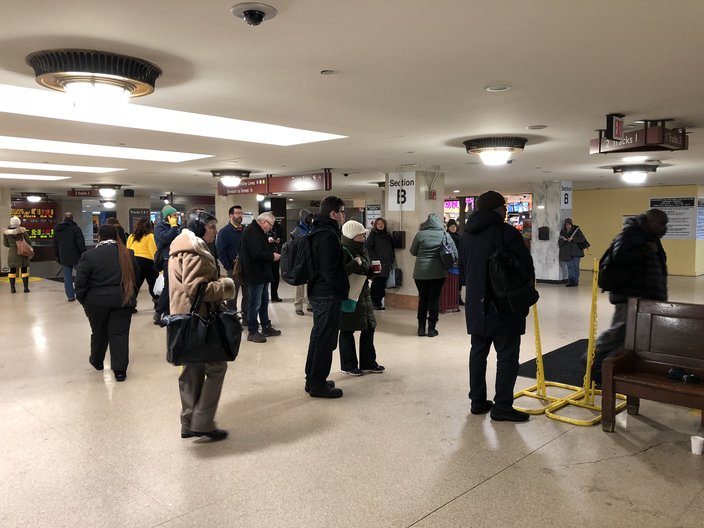 Regional Rail passengers wait out delayed trains in Suburban Station after a winter storm covered the Philadelphia region with several inches of snow on Thursday, Jan. 4.

But not everyone experienced frustration, nor were all SEPTA trains greatly delayed.

Tommi Jackson, 59, of Glenolden, Delaware County, said she was pleasantly surprised when her train arrived on time Thursday morning. After spending a few hours at the office, she only had to wait out a five-minute delay for her ride home.

The snow had not significantly impacted her day.

"Five inches is nothing," Jackson said. "We make a big deal out of this when it used to be the norm."

Dave DeLisi, 33, of Philadelphia, said the snow made getting into a work difficult and prompted him to leave early. His train was experiencing a 10-minute delay.

"It's been worse, I'll put it that way," DeLisi said of his commute. "Overall, it isn't too bad." 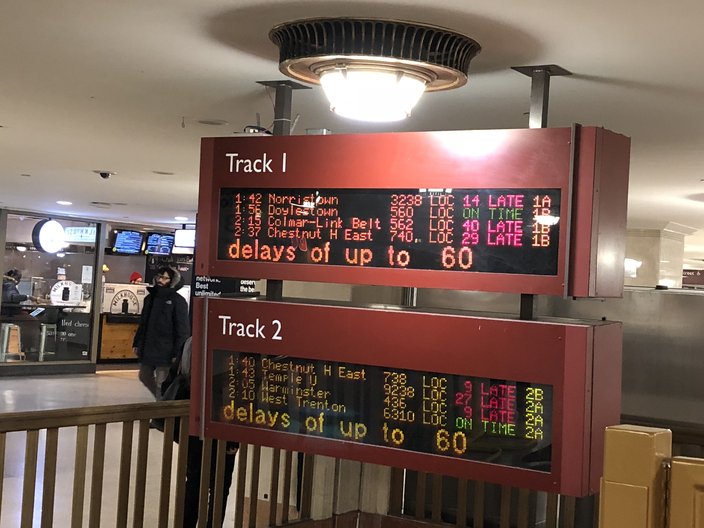 Many Regional Rail trains were running on delays after a snowstorm moved across the Philadelphia region on Thursday, Jan. 4.

Gin Choi, 25, of Philadelphia, said she was fortunate to be leaving work early, anticipating the evening commute to be difficult.

"It will probably be a lot worse around 5," Choi said. "As long as you're able to leave a little early, it's manageable."

Markeeta Johnson, 26, of North Philly, said the snow didn't halt her from traveling around Philly on Thursday afternoon. But her Uber ride home from work at 8 a.m. had been a little precarious.

"We spun in a whole circle going through Fairmount Park," Johnson said. "We saw two accidents."