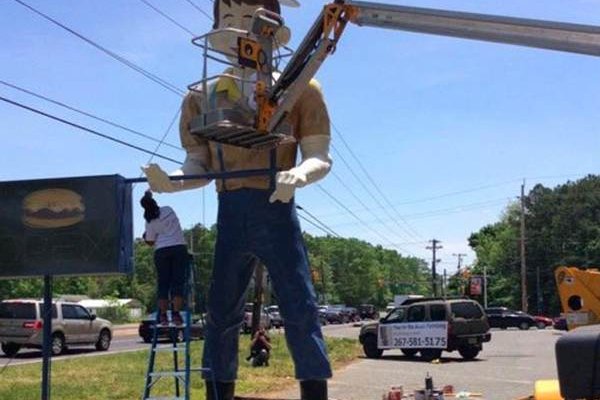 Mr. Bill's, an iconic ice cream and snack shop on the way to the shore, is re-opening soon after being shuttered for two years.

A shuttered icon familiar to shore-bound travelers on Route 73, just before the Atlantic City Expressway entrance in South Jersey's Winslow Township, should open by the end of the month.

Mr. Bill's, familiar because of the 28-foot fiberglass statue modeled on Mad Magazine's Alfred E. Neuman, was a favorite stopping place for John Ernst on his family's travels to Atlantic City and then later, Wildwood Crest.

Now, Ernst, 71, a former hospital CEO, and his wife, Cheryl, 59, are the owners of the ice cream and food stop. The Medford couple hope open for business within a week and no later than July 4.

Opened in the 1950s, the stand has been shuttered for the past two years.

The Ernsts bought it via bankruptcy sale.

Cheryl Ernst, who ran a pediatric section at the hospital, said smaller portion options and lower prices overall were requests of loyal customers.

"They want us to make it what it was back in the day," she said Friday.

But John Ernst, who had retired five years ago, said the stand will continue to make its own ice cream, water ice and baked goods on site.

The couple have a few more tweaks and inspections to get through, but most of the big work – such as repainting the statue – is behind them. Check for progress here on their Facebook page.