Spotted lanternfly update: What one arborist says you need to worry about now

The invasive spotted lanternfly, which made its way to Pennsylvania this past summer, has been posing new challenges every month.

First, we tried to kill them. Then we tried to control them. Now, we're trying to prevent them.

If you haven't heard, lanternflies are native to China, India and Vietnam and first turned up as an invasive species in the U.S. in Berks County, Pennsylvania in 2014. Here's more information about the insects and how to identify them.

These days, 13 counties in southeastern Pennsylvania are under quarantine because they're spreading. And they've been spotted in Delaware, New Jersey, New York and Virginia, too. And Philly isn't safe from them, either. They made land here earlier this month and most recently are in Center City and near Fairmount Park in West Philly.

Arborist Gary Schermerhorn of The Davey Tree Expert Company in King of Prussia, calls them "hitchhikers" because they are insects without expert flying abilities. They're mainly hoppers and gliders, Schermerhorn said. They're growing just by transporting themselves on cars, trucks, and trains. In fact, you can track their path just by looking at a map of major highways and train rail lines.

"It’s spreading pretty rapidly," he said. "It seems to be almost exponential, I would say. ... [People are] doing a pretty good job of spreading them."

So the next phase is, naturally, preventing them from traveling to new states. And that starts this fall.

The Department of Agriculture has tasked Schermerhorn and other specialists with spreading the phrase "Look before you leave" in an attempt to stop motorists from driving out of their county lines with the insects hitching a ride on the side of their vehicles.

If you do spot lanternflies on your car or elsewhere, officials are asking you to take a picture and submit it to badbug@pa.gov. You can also submit specimens and report where you saw it. 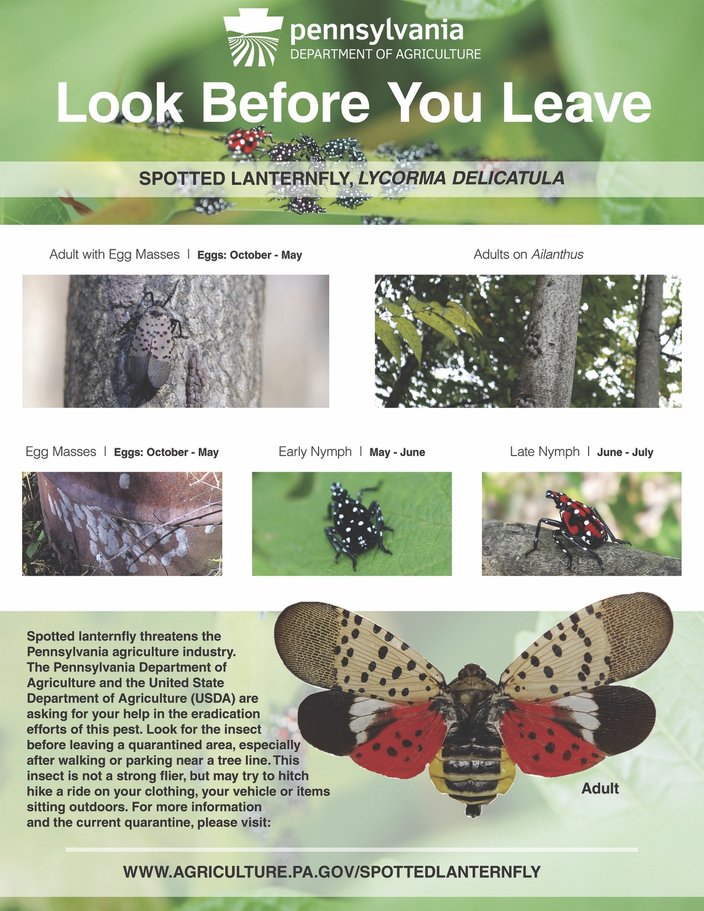 A flyer warning motorists to check their vehicles for spotted lanterfly.

During the autumn months, when female flies lay their eggs, specialists are also asking property owners to check for egg masses on tree trunks and other flat surfaces like patio furniture. These masses are grey and appear to look like cracked, dry mud. Old egg masses appear as rows of 30 to 50 brownish seed-like deposits in four to seven columns on trunks, roughly an inch long.

If you see egg masses, scrape them off and double bag them to throw away. You can also submerge the masses in alcohol or hand sanitizer to kill them. If you destroy any egg masses, the Dept. of Agriculture is asking everyone to report it on their website.

Trunk treatments are better reserved for spring time, so proactive movement on egg masses is critical.