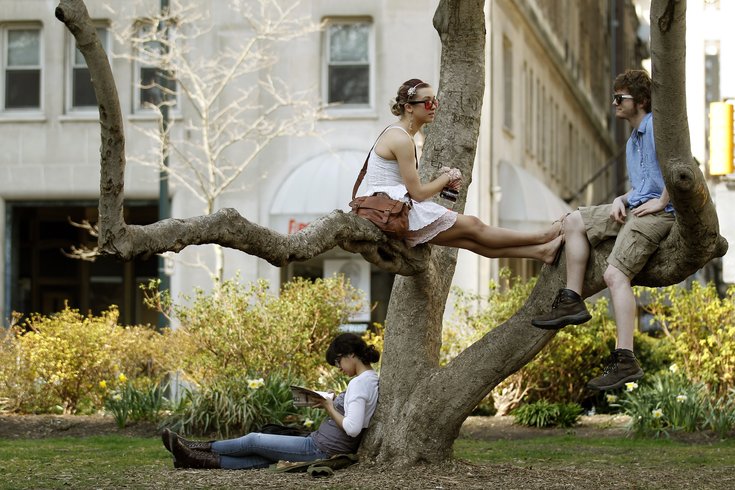 Amanda Diaz, bottom left, reads a book as Ciara Perez, top left, and Chris Elam sit in a tree during the unseasonably warm weather in the Rittenhouse Square park Tuesday, March 13, 2012 in Philadelphia.

You thought today was nice? Wait until the end of the week.

Philadelphians enjoyed the warm weather Saturday as temperatures crept up to 66 degrees but will soon dip down to 47 degrees tonight, according to the National Weather Service.

RELATED STORY:
Best spots in Philly for an outdoor nap

Saturday's weather almost hit record temperatures – it reached 69 degrees in 2011, according to AccuWeather.

While it's still the middle of February, the rest of the week is expected to feel a lot like spring, too.

The National Weather Service expects for Sunday's high to near 68 degrees, with winds just seven to 11 mph. Sunday's low will then drop to 39 degrees at night.

Pack a sweatshirt or a light jacket for Monday through Wednesday but come Thursday, it might be time for tank tops and T-shirts when the high is expected to reach 69 degrees.

Check out the week's forecast:

Sunday: Clouds are expected earlier in the day but will later give way to sunshine. Highs expected near 68 degrees with a low around 39 degrees. Winds between seven to 11 mph are expected.

Monday, President's Day: Sunny, reaching up to 55 degrees for Philadelphia with winds from nine to 14 mph expected. Temperatures will drop at night where the low could reach just 32 degrees.

Tuesday: The high will reach 50 degrees with a 20 percent chance of precipitation in the evening. The low is expected to near 41 degrees.

Wednesday: Partly sunny with temperatures expected to reach 63 degrees with a low of 45 degrees.

Thursday: The high could climb up to 69 degrees but may hit a low of 46 degrees.

Friday: Cloudy, with a 30 percent chance of precipitation and a high near 62 degrees. The low is expected around 50 degrees.

Saturday: A high near 59 degrees with a 60 percent chance of precipitation.