The commission also renewed the licenses of two charter schools

The five-member commission also voted to renew the charter licenses of Harambee Institute of Science and Technology Charter School in West Philadelphia and YouthBuild Charter School in North Philadelphia. But after a marathon meeting that included more than 60 public speakers, the SRC did not vote on seven other charters up for renewal.

Many of the speakers came to support or oppose the district turning Wister over to Mastery Charters Inc., an organization that runs several other schools in the city. When the SRC voted to do just that, much of the crowd burst into cheers.

"The whole fight with Wister is about our children. We have to do what's best for them." – Anna Figueroa, Mastery proponent

Huey will be turned over to the operators of Global Leadership Academy Charter School in West Philadelphia and Cooke will be run by Great Oaks Foundation, which operates charter schools in Delaware, New York and Connecticut.

Chairwoman Marjorie Neff was the only SRC member to vote against adding Renaissance schools, though Farah Jimenez abstained from the Wister vote. Neff said she would not vote to approve any more Renaissance schools until the district's finances improved.

The possible transformation of Wister had sparked considerable debate between supporters who claim Mastery can better educate its students and traditional school advocates who say otherwise.

Superintendent William Hite Jr. initially had recommended Wister be turned into a Renaissance school with both Huey and Cooke. But he changed his mind in January, citing signs of academic improvement. Yet, the SRC subsequently passed a resolution to ignore Hite's reversal.

Hite declined to say whether the SRC made the right decision.

"I don't have unilateral control," Hite said. "I submit recommendations and the SRC makes votes. That's how governance works. It's not appropriate for me to say what's right or what's wrong or how I feel." 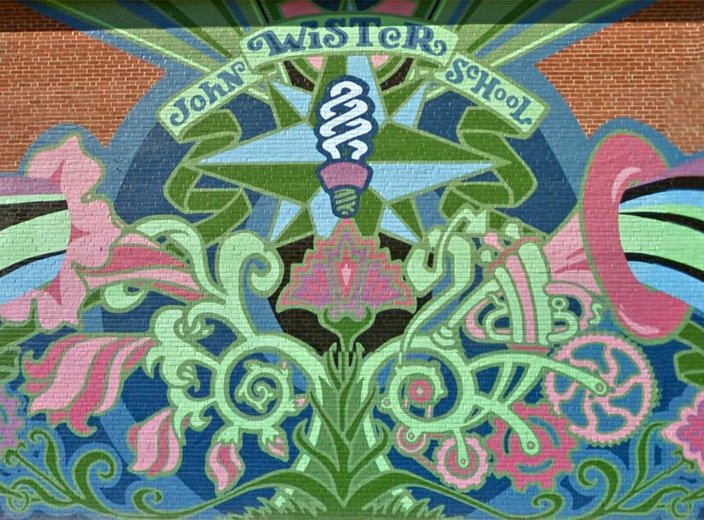 A mural decorates a wall outside the John Wister Elementary School in the East Germantown neighborhood of Philadelphia. The school soon will be operated by Mastery Charter Inc.

'THIS TURNAROUND IS NEEDED'

Dozens of supporters and opponents were among several hundred people who packed into the Education Center late Thursday afternoon for the meeting.

Anna Figueroa, a grandparent of four Wister students, urged the SRC to turn Wister into a Mastery school. She pointed to 300 "intent to enroll" forms signed by families seeking to send their students to a Mastery-operated school.

"The whole fight with Wister is about our children," Figueroa said. "We have to do what's best for them. We've been fighting hard trying to bring changes to our school. Now, we're ready to work with Mastery to get our children back on track."

"I believe it is essential to infuse Philadelphia public schools with the resources that they need for all students to excel. Mastery is not the magic remedy or a key to all of the education problems in Philadelphia." – Monica Clark, Mastery detractor

Danyelle Mack, the parent of a second-grade student, said change is necessary to improve the school's performance.

"This turnaround is needed now more than ever," Mack said. "The academic program is in no way great. Students are not being challenged. There is poor leadership. Wister is unorganized on a daily basis and on field trips. They are chaotic."

But other parents and Germantown community members stressed that Wister should remain a district school.

"All this can be built upon to create a model community school serving families, children and the neighborhood as a whole," she said.

Monica Clark, a doctoral student at Temple University, expressed confusion that the SRC ignored Hite's directive to keep Wister a district school. Why would an improving school be slated for the Renaissance initiative, she asked.

"I believe it is essential to infuse Philadelphia public schools with the resources that they need for all students to excel," Clark said. "Mastery is not the magic remedy or a key to all of the education problems in Philadelphia."

Whatever the SRC decided, Wister parent Gail Tarver told the commission the process had severed the Wister community.

"The tactics used against the families of Wister Elementary School have been damaging and divisive," Tarver said. "Because of the way your turnaround was handled, it has caused a need for healing within our school families and our neighborhood. We will unite again as a family, whether it becomes a charter school or remains public."

The SRC also was slated to consider the renewal of nine existing charter schools.

The district's Charter School Office had recommended renewing five of them, including Harambee and YouthBuild, but denying four others. The CSO released its recommendations earlier this month after evaluating the schools' academic success, organizational viability and compliance, and financial health and sustainability.

Resolutions to deny the licenses to four charter schools – all in line with the CSO's recommendations – were either tabled or withdrawn after Commissioner Bill Green noted the City Controller's Office will be issuing a report on the schools' operators, ASPIRA Inc. and Universal.

Green did not know exactly when the report will be issued, but he said it was expected to be made public at some date after the SRC meeting.

"It just seemed to me that that's a game I didn't want to play," Green said. "He can issue the report. Then we can make the vote. Like I said, I don't think his report will have utility compared to the Charter Office. They are the experts, but we'll see what the controller has to say."

Supporters of each of those schools had urged the SRC to approve renewals earlier in the meeting, touting the benefits the schools provide.

Joseph Harris, a junior, said he was a 'C' student before enrolling at Universal Audenreid as a sophomore. His grade point average has since risen to 3.3 and he has made the honor roll each marking period.

"I knew I had great potential," Harris said. "I just needed to have the dream team around me."

Fatima Kayed, a junior at Olney Charter High School, praised her teachers and the various post-graduation opportunities provided by the school.

"Olney is one of the most stable charter schools around the Philadelphia area," Kayed said. "Others do not get the opportunities that we do."