St. Joe’s Prep defies a mountain of obstacles to take another state title 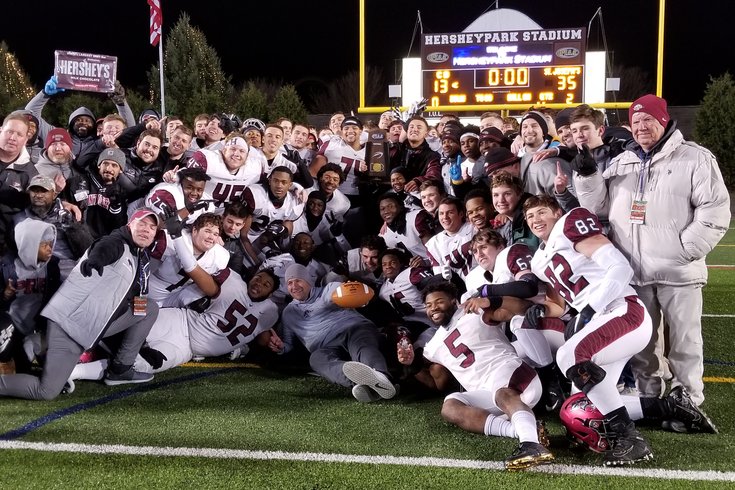 They’re essentially the most hated team in Pennsylvania — and they don’t care.

The St. Joseph’s Prep Hawks embrace the fact that every team in the state holds them at some level of contempt. That they’re the New England Patriots and Dallas Cowboys of the Pennsylvania high school football world is motivating.

Malik Cooper certainly would validate that.

What never gets lost is the grand picture — which is another state championship, something St. Joe’s Prep comfortably secured with a 35-13 Class 6A state championship victory over a young Central Dauphin team at Hersheypark Stadium on Saturday night.

But this year was unique.

Up stepped Cooper, and Sahmir Hagans, and Josiah Trotter, and junior center Maximus Fisher, who took the place of injured center RJ McKee before the season, and sophomore Maurice Clark, who returned a blocked punt 20 yards for a touchdown in the state championship.

Up stepped their level of character and poise, when things weren’t so stable. Like when the Hawks had to beat Pittsburgh Central Catholic, 31-24, in overtime. With the season in his hands, Cooper rolled right and found Marvin Harrison Jr. in the back of the end zone with :15 left in regulation last week to tie the score.

“We embrace the role, we feed off the hate, because it makes us stronger,” said Lombardi, who, coupled with McGeary, created gaping holes on the left for Kolbe Burrell to run through for 189 yards and two touchdowns. “No one is a family like us. Everyone says it, but they don’t live it like we do.”

McGeary has started since he was a freshman. This was his third state championship in four years.

“I love the fact that we’re most hated team in the state,” McGeary said. “I do feel the hate. I love it. No matter how many obstacles are thrown at us, going out to Altoona (in the state semifinals) as the home team, and going out to Bethlehem (for the state quarterfinals), and Central Dauphin gets a bye, it doesn’t matter. We still won. We took what was dealt, and we overcame everything. I’m so proud to be a part of this team.”

No, the ride wasn’t as smooth as many from the outside looking in would assume.

“We know everyone hates us, and that’s great, it makes us work harder and focus more on what we have to do, which is what we did,” said Cooper, who was truly an unsung hero of this team, completing 9-15 for 87 yards and two TDs in the state championship.

The game was over by halftime.

Prep led, 21-0, while compiling 179 yards of total offense to a mere 63 for Central Dauphin, which was making its first PIAA state championship appearance since the Rams beat North Penn, 14-7, in 2011 for the 4A title.

The only movement the Rams had was on special teams, which came in 154 yards on three kickoff returns.

By then, Cooper, the back-up “who couldn’t throw” had thrown two TDs, one to Hagans in the first quarter and the other to Marvin Harrison Jr. on a remarkable play in which the Hall of Famer’s son caught it with his fingertips and outraced six defenders to the end zone.

With 8:52 left to play, the raucous Central Dauphin crowd, who had about a 10-minute ride to Hersheypark Stadium, began filtering out. About a minute later, the far smaller St. Joe’s Prep contingent celebrated another TD, when Burrell plowed into the end zone with a 9-yard score for the Hawks’ final TD.

“We talk about that that we’re the bad guys in the state, and we understand that,” Prep offensive line coach Tom Sugden said. “But no one wants to talk about all of the obstacles we had to overcome. We knew that with the success we had, no one likes a winner.

“Their hate makes us stronger.”